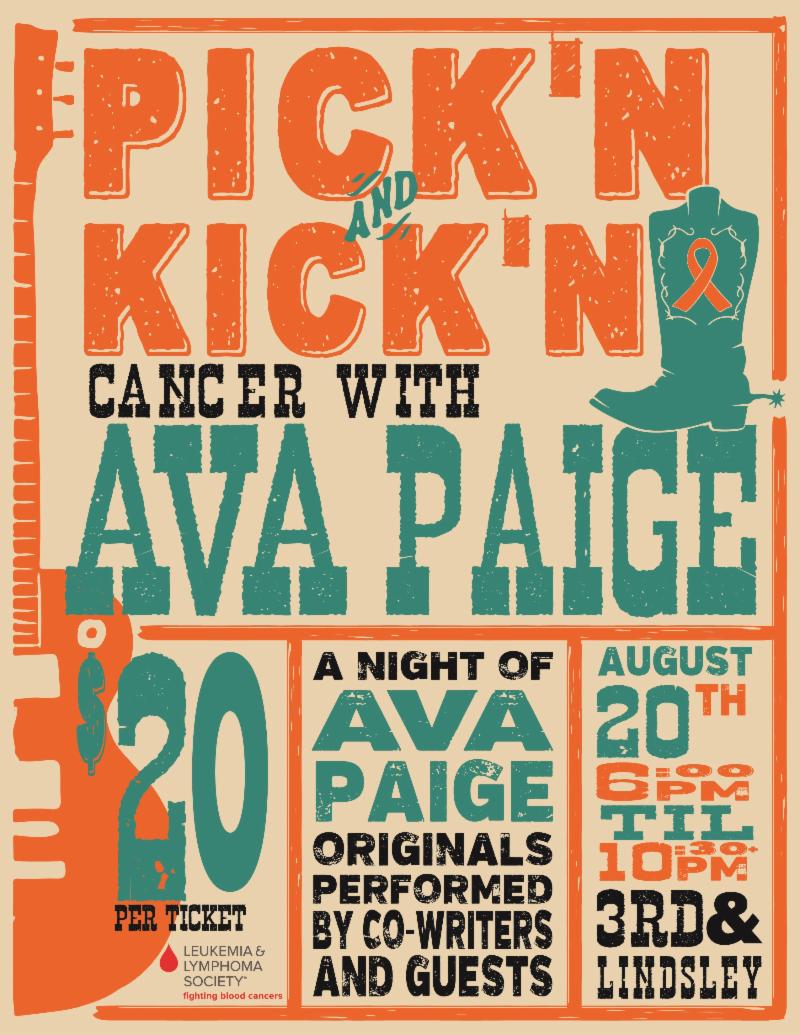 The
country music community is coming together for a night to support
singer/songwriter Ava Paige, her music and help raise money to cover her
medical expenses while undergoing leukemia.

The Pick’n And Kick’n Cancer with Ava Paige celebration, coordinated by Ralston Wells of Six Senses Entertainment, will take place on Tuesday, August 20that 3rd & Lindsleyand will feature over 60 of her co-writers performing the original songs they wrote with Ava.

Since
being diagnosed with leukemia in July, numerous artists, prominent
songwriters and industry friends have shown their love and support for
Ava by sending gifts, bringing goodies, sharing stories and, of course,
playing music at Monroe Carrell Jr. Children’s Hospital at
Vanderbilt.  The visitors have even included chart-topping country
artists Ashley McBryde, Brandy Clark, Carly Pearce and Michael
Ray.  Thankfully, Ava has received the news that she is in remission;
however, she has a long 2-year road ahead including 8 months of chemo
therapy, but she continues to fight every day.

This
event will help bring awareness to the Leukemia & Lymphoma Society
and 100% of all ticket sales and money raised that night will go to
Ava’s fund to cover her medical expenses.

Tickets:$20 in advance and can be purchased at www.3rdandlindsley.com

Born
and raised in Nashville, Ava Paige has been singing as long as she can
remember.  She was given her first guitar from her Grandad at age 7 and
fell in love with it. Since then Ava has been writing, co-writing and
playing as much as she can anywhere that lets her in all over the
Nashville area. It should come as no surprise that this singer, avid
songwriter and guitar whiz cites artists like Chris Stapleton, Ashley
McBryde, Brandy Clark, Brad Paisley, Vince Gill and more as her musical
inspirations.  Ava released her first EP in May 2017 and since then has
released numerous singles including her latest Prettier Poison which was released in March 2019.