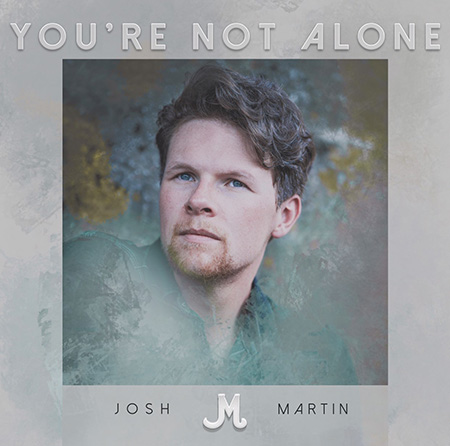 Nashville-based singer/songwriter/guitarist, Josh Martin, is teaming up with Rick Ware Racing and Gotta Kill It To Heal It Apparel company to raise money for the Kay Yow Cancer Fund. Martin is set to release a special single titled “You’re Not Alone”
on October 27th in alignment with the NASCAR Monster Energy First Data
500 race at Martinsville Speedway. One-hundred percent of net proceeds
raised by the single through December 31 will go directly to the Kay Yow
Cancer Fund. The race will feature the number 53 car wrapped in pink
ribbons with names of survivors and current fighters of breast cancer.

Martin, a native of eastern Kentucky, has been in Nashville for six
years working as a studio musician and writing songs with some of the
industry’s most sought after songwriters. He recently completed his
first full-length album titled Nothing Holding Me that will be released
on December 3rd of this year. Martin recalls going through a very dark
time in his life, shortly after losing his first major deal in
Nashville. Those months, he says, “were the inspiration for this song”.

“We all go through many different seasons in our lives and some can feel
very cold, dark, and isolated,” Martin said. “I cannot imagine the
flood of emotions someone has after being diagnosed with breast cancer.
It always hits real close to home.”

Martin, whose own family has had battles with the disease, hopes the
song will be a comfort to those currently in the thick of their own.
“Every minute a mother, grandmother, wife or daughter is diagnosed and
finds themselves at the start of a battle,” he states. “That is exactly
what this song is about. Recognizing that someone you deeply care for is
in need of your support and assuring them that no matter the
circumstances, you will be right there beside them every step of the
way”.

Martin co-wrote the song with Kent Blazy, known for his songs recorded
by Garth Brooks including Brooks first ever #1 hit, “If Tomorrow Never
Comes.” Blazy knows first-hand what it means to be there for someone
battling cancer. Although it was of a different kind, his late wife,
Sharon, passed in 2009 after a long fight with a brain tumor. Martin
feels that even though this event is centered around breast cancer
awareness, the song could be a glimmer of hope for anybody going through
anything.

“You’re Not Alone” will be available on Sunday, October 27th on most digital platforms including Apple Music, Google Play, Amazon Music, Spotify and Tidal as well as directly at JoshMartinOfficial.com. To find out more about or become involved with the Kay Yow Cancer Fund, visit their website at www.KayYow.com.

Josh Martin signed with Sony/ATV Music as a writer and
artist in 2016, spending two years in writing rooms with some of the
best in the game, releasing two singles, “How’d You Know” and “Just My
Luck.”When he was let go from the deal, his head was spinning. The suits
wanted him to be a radio star, forcing his stellar guitar chops into
three chords, and his versatile baritone into a slick auto-tuned whine.
He found himself free falling for a few months, questioning who he was
and what he wanted to be musically. As the fog cleared, he knew he had
to go back to what he loved. “It took me a good six months and almost
hitting rock bottom from a career standpoint to figure it out,” Martin
explains. “I realized I’m not a guy who is going to show up every day
and try to write for radio. I’m a musician first and that is what led me
to these songs. I had at least 200 to choose from, but it was pretty
clear after about two days of listening what direction to go to – and
that was my buried roots, the roots that had been there for twenty-some
years.”

Martin points to the title track of his most recent project as the song
that immediately resonated. It is a story of escape, without the actual
ability to escape. He calls it a true song of Kentucky, where his Floyd
County Scot-Irish kin was grandfathered into the idea that you cannot
really leave. It’s the cultural tradition, the family, the job you hope
will show up, it is a way of life. Though Martin (with his high-school
sweetheart and, eventually, immediate family) took the road south to
Music City, he still lives with the guilt of escaping Appalachia. Each
day his emotions remain in conflict: relief that he escaped the downward
spiral drug culture there and a pinning for the Mayberry-esque utopia
of his childhood. That sentiment echoes in his intimate vocal on the
track, which falls somewhere between Tyler Childers and Eric Church.
It’s rough, joyful and just a little bit sexy. The record nails that
tension effortlessly. It’s hammered in around a bluegrass core, with
inflections of country music and hints of the rock and roll he picked up
as a teenager. The players are some of the best, from Chris Stapleton’s
bass player J.T. Cure to Blake Shelton’s secret weapon, fiddle player
Jenee Fleenor. Though many of the songs are co-written, two tracks are
Martin’s alone. As a songwriter, his goal has always been to tell the
truth, even if the truth is hurtful. Nothing Holding Me, his current
project is a testament to life in Kentucky, where he used to run up and
down the holler roads – going anywhere he wanted, because he could. That
freedom, he says, rings out in every note of this collection. You can
hear traces of Guy Clark and Darrell Scott in his lyrics, and the echo
of John Mayer and Tony Rice in his guitar licks – and a hint of old-time
spirituality in his voice. The songs are both smart and accessible,
running wild and smiling back at Nashville from the open road. Martin
has finally found his musical freedom.