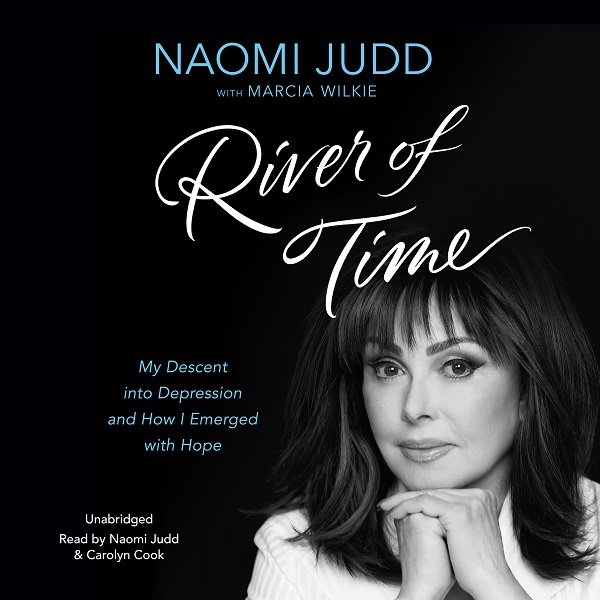 Naomi
Judd Opens Up About Struggles With Mental Depression In New Book,
“River of Time: My Descent Into Depression and How I Emerged With Hope,”
Available in Paperback Dec. 5

Appearing on the TODAY Show Dec. 5

NASHVILLE, Tenn. –
Grammy-winning country icon, best-selling author, actress, and
in-demand speaker, Naomi Judd is set to release the paperback version of
her new book, “River of Time: My Descent Into Depression and How I
Emerged With Hope” on Dec. 5. Judd will be promoting the paperback
release with multiple television, radio and online interviews, including
an appearance on the TODAY Show Dec. 5.

In “River of Time: My Descent Into Depression and How I Emerged With
Hope,” Judd shares her harrowing personal experience with the severe
depression that almost killed her. CLICK HERE TO ORDER.

Judd first captured the attention of the entire world as half of The
Judds, which she formed with her daughter Wynonna. The Judds sold 20
million records, scored fifteen No. 1 hits, and received more than 60
industry awards, including six GRAMMY® awards and seven consecutive CMA
Vocal Group of the Year trophies. That ride came to a screeching halt
when Naomi was diagnosed with Hepatitis C––and given only three years to
live. Instead of accepting her fate, the former registered nurse
educated herself and pursued healing. Today, Naomi is Hep C-free––a
medically documented miracle.

Written with Marcia Wilkie, “River of Time” picks back up with Judd
in 2010. From there, she dives into her three-and-a-half years of
nightmares, hospitalizations, psychiatric wards, drug poisoning and
addiction, electroconvulsive shock treatments, suicidal thoughts, and
more. Raw and unflinchingly candid, the book serves beautifully not as a
voyeuristic joyride, but as a generous confession and clarion call for
others to fight on and reach out.

“I wrote it with the sincere hope of offering encouragement to the 40
million Americans who suffer from depression and anxiety every minute
of every day and night,” Judd said. “I want them to know that I
understand, and I’m here to help.”

Throughout, readers of “River of Time” will explore the effects of
Judd’s traumatic childhood filled with abuse and generations of mental
illness. Judd also opens up about the electroconvulsive therapy (ECT)
treatments that would ultimately bring her some long-sought relief, the
strain that her illness brought her relationships with daughter Wynonna
and husband Larry Strickland, the wisdom she received from friends and
what others can do when suffering.

Judd’s tale is gripping, and while she offers it with the deft skill
of a natural-born storyteller, what matters most is her message. “River
of Time” is more than just a compelling read. For many, it could be a
life-saving one.