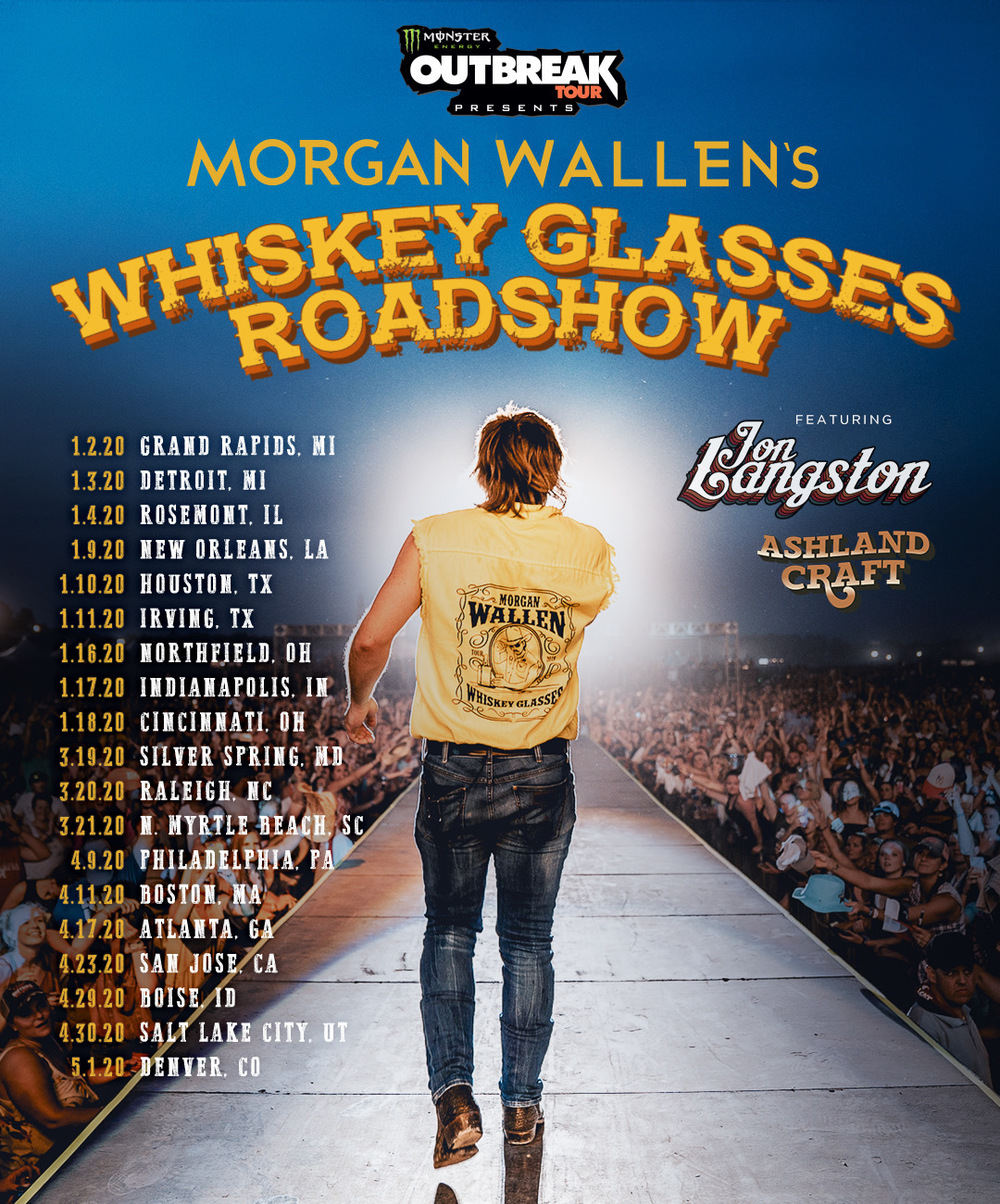 “This year so far, I’ve mostly played shows as the opening act. While I
love that, and appreciate everyone who’s made that possible, I’m ready
to get into rooms where I know the energy will all be directed towards
our music and our production,” shares Wallen. “It’s been a while since
I’ve gotten to headline, so I can’t wait to see some of the same faces
I’ve gotten to know from before and get to know a bunch of new ones. I
know it’s going to be the best one yet. Jon is one of my good buddies
and has his own star rising, so I’m super pumped he accepted the offer
to come out. Ashland is a new talent, one that most aren’t familiar with
yet, but that will change soon. So I ask y’all to show up early and
show both of them love. You won’t be disappointed.”

Set to kick off January 2 in Grand Rapids, MI, and roll through May 1 in
Denver, CO, the coast-to-coast run will feature special guests Jon Langston and Ashland Craft,
stopping in 19 cities nationwide. Pre-sales for tickets to MONSTER
ENERGY OUTBREAK TOUR PRESENTS: MORGAN WALLEN’S WHISKEY GLASSES ROADSHOW
begin October 14 and will go on-sale to the general public October 18.
Live Nation is the official promoter of the tour.

Recently named to PEOPLE’s coveted “Ones To Watch” list, the news follows Wallen’s successful 2019 IF I KNOW ME headline tour, massive summer on Florida Georgia Line’s
CAN’T SAY I AIN’T COUNTRY tour and his second consecutive
PLATINUM-certified #1, “Whiskey Glasses.” The East Tennessee native
scored his first-ever CMA nomination for New Artist of the Year – and has been projected as a top contender for the 2020 GRAMMY Award for Best New Artist by Billboard and Forbes.

As 2019 winds down, Wallen is keeping his foot on the gas as breezy
heartbreaker “Chasin’ You,” gains at Country radio and he joins Luke Combs’ sold-out BEER NEVER BROKE MY HEART tour.

Earlier this summer, Wallen unveiled hypnotic collaboration with Diplo, “Heartless,” and will hit the road on Jason Aldean’s WE BACK TOUR next year.

Morgan Wallen’s debut album IF I KNOW ME (Big Loud Records)
delivered back-to-back PLATINUM-certified #1s; “Up Down” featuring
Florida Georgia Line, multi-week chart-ruler “Whiskey Glasses,”
GOLD-certified lead “The Way I Talk” and current single, “Chasin’ You.”
With over 1 BILLION total career streams to his credit, he received his
first-ever CMA Awards nomination for New Artist of the Year, after earning a CMT Breakthrough Video of the Year award nomination for “Whiskey Glasses.” The breakout star was chosen as a MusicRow 2019 “Next Big Thing” artist, spotlighted in CMT’s Listen Up “18 for 2018” class, and named a 2018 Taste of Country RISER
among other accolades. Wallen has co-penned hits for Jason Aldean
(PLATINUM-certified multi-week #1 “You Make It Easy”), Kane Brown, A
Thousand Horses and Dustin Lynch, and garnered critical acclaim for his
cover of Jason Isbell’s “Cover Me Up,” while on-fire Diplo
collaboration, “Heartless” continues to gain momentum nationwide.

Jon Langston grew up in Loganville, GA as the oldest of three boys,
listening to music by his heroes Alan Jackson and The Eagles. He grew up
playing football, eventually earning a football scholarship to college.
Jon always thought football would a part of his life, but after his
sixth concussion left him blind for fifteen minutes, his Division 1
football career ended abruptly. Jon picked up his guitar which he hadn’t
touched since the eighth grade and re-taught himself how to play.
Playing open mic nights and working on his songwriting eventually lead
to the 2013 release of “Forever Girl,” the first song he ever wrote by
himself. That release kicked off his music career which has culminated
in 15 sold out shows this year and over 400 MILLION career streams. Jon
opened for Luke Bryan on his Farm Tour in 2017, which was a full circle
moment for Jon who had been in the crowd as a spectator of Luke Bryan’s
Farm Tour only a few years before in Athens, Georgia. He was invited to
perform on the tour again in 2018 and joined Luke in support of his
Sunset Repeat Tour in 2019. Jon has signed a publishing deal with Sony
ATV, management with KP Entertainment, and is the first artist signed
under Luke Bryan’s new Label 32 Bridge Entertainment in conjunction with
EMI Records Nashville. On his new label home, Jon released his major
label debut single, “When It Comes To Loving You,” which reached No. 1
on the all-genre iTunes Chart, and followed it shortly after with the
release of fan favorite, “Dance Tonight.” Jon’s current single, “Now You
Know” is climbing the country radio charts. For more information please
visit www.jonlangston.com and follow @jonTLangston on Twitter @jonlangston on Instagram and on Facebook

Ashland Craft is a country music singer/ songwriter from Piedmont, South
Carolina. In 2017, she had the opportunity to compete in NBC’s hit
television show The Voice, where she finished as a top 10
finalist, as a member of Team Miley. During her time on the show,
Ashland received high notoriety from critically-acclaimed musicians such
as Billy Ray Cyrus, Gretchen Wilson, Tanya Tucker and Zac Brown Band.
She is now traveling with her band and has opened for artists such as
Michael Ray, Devin Dawson, Scotty McCreery, Craig Campbell, William
Michael Morgan and LANCO. Ashland is excited to make her mark on country
music and become a household name.

Most companies spend their money on ad agencies, TV commercials, radio
spots and billboards to tell you how good their products are. At Monster
Energy, we chose none of the above. Instead we support the scene, our
bands, our athletes and our fans. We back athletes so they can make a
career out of their passion. We promote concert tours, so our favorite
bands can visit your hometown. We celebrate with our fans and riders by
throwing parties and making the coolest events we can think of a
reality. www.monsterenergy.com.