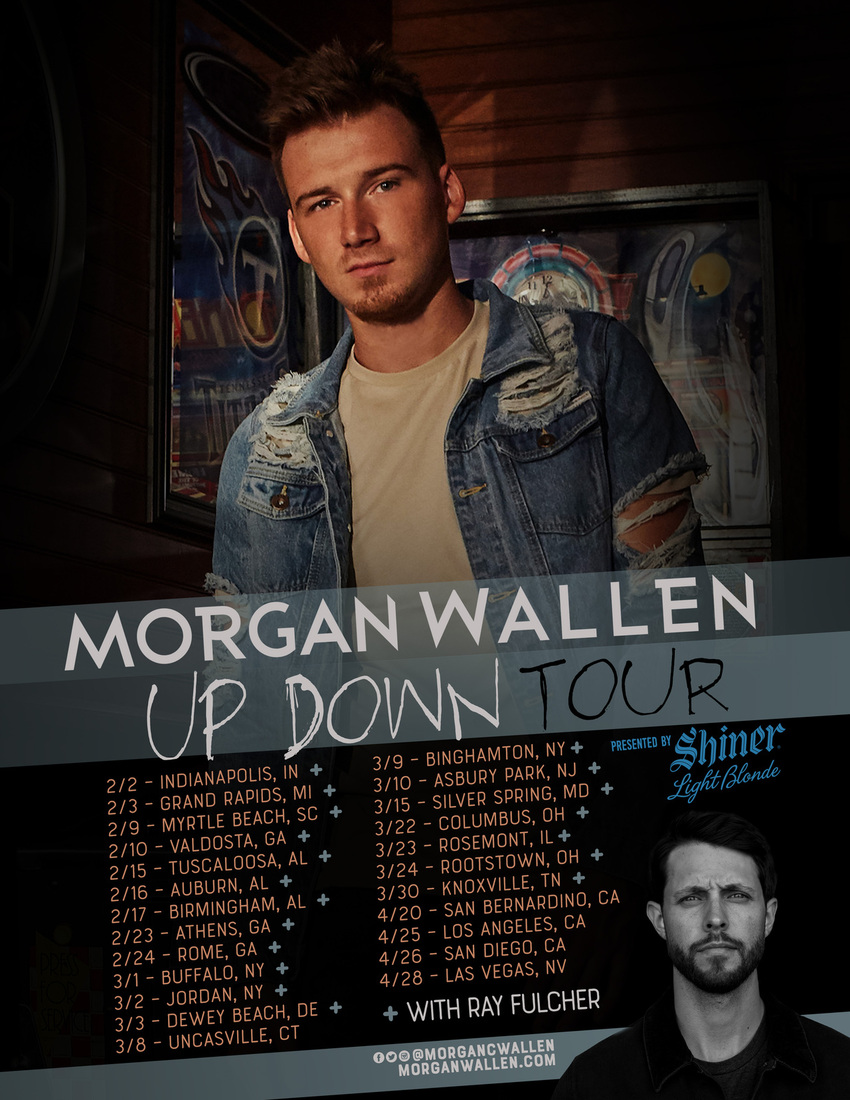 MORGAN WALLEN SET FOR HEADLINING UP DOWN

MORGAN WALLEN SET FOR HEADLINING UP DOWN

Nashville, Tenn. (December 5, 2017) – Following a whirlwind year opening for some of the biggest names in Country music, exciting new talent MORGAN WALLEN will blaze his own trail in 2018, hitting the road for his headlining UP DOWN TOUR presented by Shiner Light Blonde.

“I
can’t wait to get on the road and play some new music for people across
the country,” shares Wallen. “I’ve been lucky enough to watch and learn
from incredible artists and entertainers like FGL who took me out on
their tours early on. Now, I’m excited to hit the stage as a headliner
and really show everyone what I’m about.”

The
electrifying new face has been crafting his live show as support for
the likes of Florida Georgia Line, Chris Lane, and Granger Smith. The UP
DOWN TOUR kicks off February 2 in Indianapolis, IN, with tickets on
sale December 15. Wallen will be joined by opener Ray Fulcher for select
dates on the coast-to-coast run.

“Up
Down,” Wallen’s latest single which features FGL, is on it’s way to
being a surefire hit, already in the Top 40 on the Billboard Hot Country
Songs chart and within the Top 50 on Country Airplay charts just one
week after hitting radio airwaves. The swampy head-bobber follows his
Top 30 debut single “The Way I Talk.”

Here are the 2018 dates for Morgan Wallen’s UP DOWN TOUR:

Born
in Sneedville, Tenn. (also home to bluegrass legend Jimmy Martin),
Wallen was a star on the baseball diamond, attended the same high school
as Country superstar Kenny Chesney, and has deep roots in the church.
With a Hard Rock-loving preacher for a father and a mother who couldn’t
get enough Country and contemporary Christian music, Wallen began
performing for his local congregation at the tender age of 3 and went on
to develop a strong love of Country, Rock and Hip-Hop. After moving to
Music City in 2015, he’s co-written with hitmakers like Craig Wiseman,
Rodney Clawson, Chris Tompkins, the Warren Brothers, Tommy Cecil and
Matt Dragstrem, and has been honing his studio poise with award-winning
producer Joey Moi. Wallen’s five-song EP THE WAY I TALK (2016)
features Top 30 debut single “The Way I Talk,” that made its mark on
Spotify’s popular Wild Country, New Boots and New Music Friday
playlists.