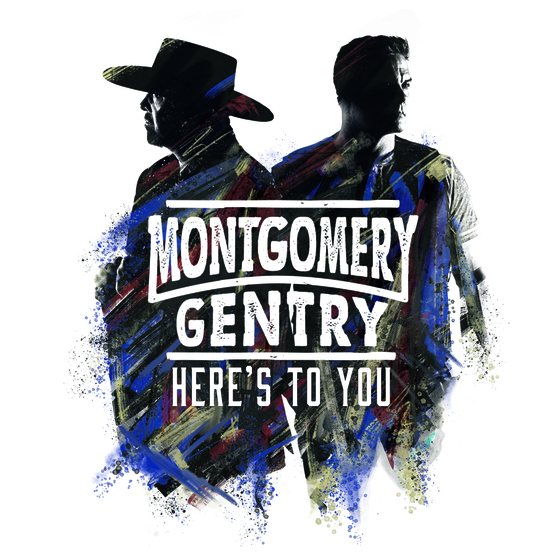 “Here’s
To You,” is touted as “a country set rooted in Southern rock and all
the visceral electricity and party attitudes that come with it,” by the Lexington Herald Examiner.
Award-winning producers, Noah Gordan and Shannon Houchins, produced
“Here’s To You,” which is the follow-up to their last offering in 2015.

Billboard noted,
“Here’s To You” is simply a reflection of the values and lifestyle that
the duo has always tried to exemplify – and they were able to do it
their way.” While CMChatlive.com
commented, “The album is filled with those southern, good ole boy
themes that fans are used to hearing from the duo…Eddie is keeping
the Montgomery Gentry name going strong.”

While there are plenty of future Montgomery Gentry fan favorites on the
new collection, it also represents a more mature sound for the Kentucky
Music Hall of Fame members. “Coming up on our 20th anniversary we wanted
to put out a killer album,” commented Montgomery. “We hunted and hunted
for the right songs. In the studio we were feeling really loose. It was
just beautiful and a lot of fun. Troy’s soul came out on this album; I
think it was the best I’ve ever heard him sing. This album is about
where we were at in life.”

From the album’s cornerstone first single, “Better Me,” which
exemplifies where Troy Gentry was with faith and family, to songs of
redemption like, “All Hell Broke Loose,” a love-inspired turnaround, to
“Drink Along Song,” an instant MG classic and “Get Down South,” a
dirt-road anthem that will resonate with rural fans and city dwellers
alike, “Here’s To You” has something for every fan – both new and old.

8) FEET BACK ON THE GROUND

11) THAT’S THE THING ABOUT AMERICA

Average
Joes Entertainment’s acclaimed Montgomery Gentry released their
long-awaited studio album, “Here’s To You,” on February 2, 2018. With 20
plus charted singles, the Kentucky-born duo has earned CMA, ACM, and
GRAMMY awards and nominations with undeniable blue collar anthems like
“Hell Yeah,” “My Town,” and “Hillbilly Shoes.” They’ve notched five No. 1
singles, “If You Ever Stop Loving Me,” “Something To Be Proud Of,”
“Lucky Man,” “Back When I Knew It All” and “Roll With Me.” They were
inducted as Grand Ole Opry members in 2009 and were inducted into the
Kentucky Music Hall of Fame in 2015. For more about Montgomery Gentry,
visit www.montgomerygentry.com, engage with the band on Facebook, @mgunderground on