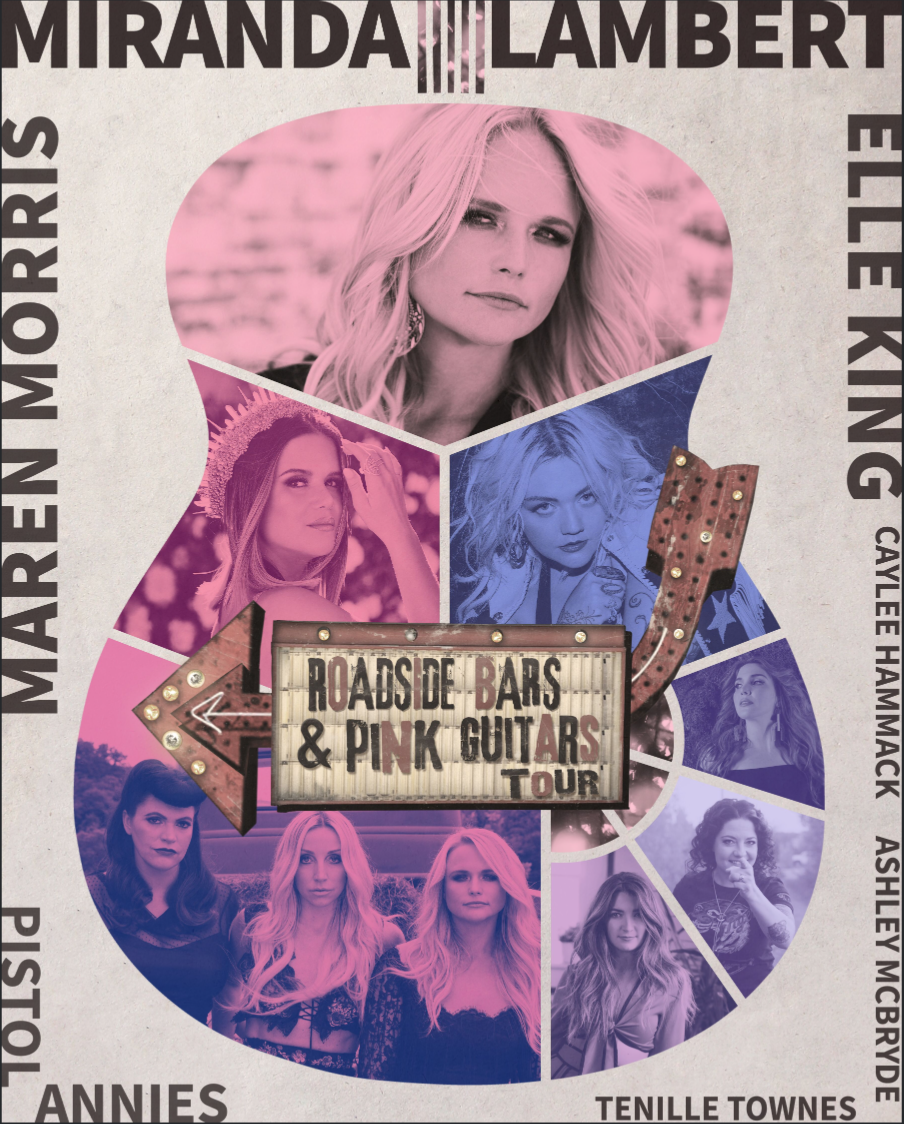 Two-time GRAMMY Award-winner and reigning ACM Female Vocalist of the Year Miranda Lambert returns to the road this fall on the Roadside Bars & Pink Guitars Tour 2019 – and she’s bringing a heavyweight roster of female powerhouses along for the ride.

“I’m
so excited and honored to be on tour with some of my favorite artists,
who each inspire me in a different way,” shared Lambert of the all-star
tour roster. “Maren Morris is a fiery fellow Texas girl that isn’t
afraid to take a risk and be who she is. Elle King is a brave, confident
and unapologetic artist who is honest about her life and uses it for
her art. My fellow Pistol Annies are not only some of my best friends
and writing partners, but also make me want to be a better artist every
time we take the stage together. Tenille, Ashley and Caylee are all
women who have something to say and they do it their own way. They are
the next generation of fearless female artists and I’m so thrilled to
share a stage with them.”

Citi is the official presale credit card of the  Roadside Bars & Pink Guitars Tour 2019.
As such, Citi cardmembers will have access to purchase presale tickets
beginning Tuesday, April 9 at 12 p.m. local time until Thursday, April
11 at 10 p.m. local time through Citi EntertainmentSM. For complete presale details visit www.citientertainment.com. Tickets begin to go on sale to the general public Friday, April 12 (details below) at www.MirandaLambert.comand via Live Nation, the official tour promoter, at www.LiveNation.com.

Lambert has long been hailed for her live performances, earning multiple ACM and CMA nominations for Entertainer of the Year. Rolling Stone praised
her balance of “star power with humanity” at last year’s Los Angeles
stop, noting that “she moved as if an electric current ran through her
veins, propelling her around the stage [as one of the] few who can pull
off a balance of flinty fierceness and deep soul ache.” Pollstar spoke
similarly of her most recent Indianapolis date, remarking that “her
command of the stage and the momentum build of her songs suggest
Lambert’s becoming a true heir apparent to the feisty side of Loretta
Lynn.”

The most-awarded artist in ACM history, Lambert will take the stage this
Sunday, April 7 to perform a medley of her hits as well as a special
duet with George Strait on the CBS telecast, where she is a double
nominee in the Female Artist of the Year and Music Event of the Year
categories. She will also be performing at various fairs and festivals
this summer in advance of the Roadside Bars & Pink Guitars Tour 2019.

Vanner Records/RCA Records Nashville singer/songwriter Miranda Lambert
is the reigning ACM Female Vocalist of the Year, having been bestowed
this honor for nine consecutive years. Her accolades include 2 GRAMMY
Awards, 13 (CMA) Country Music Associations Awards and 32 (ACM) Academy
of Country Music Awards as well as many other honors, including the
prestigious Harmony Award from the Nashville Symphony.

The Texas native released her last record, a double album titled The Weight of These Wings in November 2016, that debuted at No. 1 on the Billboard Country Albums chart. She touts six studio albums to her repertoire; Kerosene (2005), Crazy Ex-Girlfriend (2007), Revolution (2009), Four The Record (2011) and Platinum (2014),
the latter earning Lambert a GRAMMY Award for Best Country Album, in
addition to her previous GRAMMY win for Best Female Country Vocal
Performance in 2010 for “The House That Built Me.”  The first song
released from The Weight Of These Wings, “Vice,” received
multiple GRAMMY and ACM Award nominations. Lambert’s next single “Tin
Man”, which she debuted at the 52nd Academy of Country Music Awards, won
“Song of the Year” at the 53rd Academy of Country Music Awards (ACM).

Miranda toured extensively in 2018, starting with the Livin’ Like Hippies tour in January and then following it up with The Bandwagon summer
tour with Little Big Town. She was also honored by the Country Music
Hall of Fame as their “Artist In Residence” performing twice in
September. As if that wasn’t enough, she wrapped the year with releasing
another Pistol Annies album Interstate Gospel on November 2. She returns to the road this year on the Roadside Bars & Pink Guitars Tour 2019.

Maren Morris is one of the leading voices in country music today—armed
with incredible vocal stylings that reflect her country, folk and pop
influences, sheer talent, honest lyrics and a strong presence. Morris’
latest album GIRL, released in March 2019 via Columbia
Nashville, shattered the record for the largest ever debut streaming
week for a country album by a woman with 23.96 million streams. The
album debuted at No. 1 on the Billboard Top Country Albums chart and No. 4 on the Billboard 200. It also features history-making title track “GIRL” which had the highest debut on Billboard’s Country Streaming Songs chart by a female artist and the highest weekly streams by a female country artist ever. GIRL comes three years after Morris’ breakout, Gold-certified debut album Hero and
explores how her life has changed since then—a skyrocketing career,
falling in love, becoming engaged and then married—and the highs and
lows in between. The singer, songwriter and performer is fresh off the
heels of five GRAMMY nominations at this year’s awards including Record
of the Year and Pop Duo/Group performance for her massively acclaimed
hit “The Middle” with Zedd and Grey which also broke the record for most
weeks atop Billboard’s Hot Dance/Electronic Songs chart,
making Morris the first country artist to top that chart. Her GRAMMY
nominations also included Country Solo Performance for her Elton John
cover “Mona Lisas and Mad Hatters” and Country Duo/Group Performance and
Country Song for her Vince Gill collaboration “Dear Hate.” Morris won a
GRAMMY Award for Best Country Solo Performance at the 59th GRAMMY
Awards, was named New Artist of the Year at the 50th Annual CMA Awards,
Top Country Female Artist at the 2018 Billboard Music Awards and New
Female Vocalist of the Year at the 52nd Academy of Country Music Awards.
She was also the most-played female artist on country radio in 2017 and
2018. The 28 year-old from Arlington, Texas got her start playing in
bars around her hometown and quickly made a name for herself with Hero and its Platinum-selling “My Church,” Gold-selling “80s Mercedes” and “I Could Use A Love Song.” Hero and
its singles topped charts nationwide, set Country radio records and
were some of the most critically-acclaimed works of 2016.

Multi-Platinum and GRAMMY-nominated recording artist Elle King released her critically-acclaimed second album, Shake The Spirit in October 2018, featuring current single “Baby Outlaw.” Shake the Spirit is the follow up to her debut album Love Stuff which
featured her breakthrough single “Ex’s & Oh’s,” and earned her two
GRAMMY nominations and was certified double Platinum. The track hit No. 1
on Billboard’s Hot Rock Songs Chart, and topped the AAA, Hot
AC and Alternative Radio charts, leading King to become the second
female artist in 18 years to reach No. 1 at the latter format. She was
also featured on Dierks Bentley’s GRAMMY-nominated No. 1 Country Airplay
hit “Different For Girls” (she performed it with Bentley at the CMA
Awards and took home an award for “Musical Event of the Year”). King
also performed for President Obama in honor of Mavis Staples at the 2016
Kennedy Center Honors.

Elle King will be appearing on ABC’s American Idol this Sunday, April 7, and performed on Good Morning America, Late Show With Stephen Colbert, Live with Kelly and Ryan, The Late Late Show with James Corden and Late Night With Seth Meyers, in support of her new album. Visit www.elleking.com for more.

Combining the talents of acclaimed country forces of Miranda Lambert
(Lone Star Annie), Ashley Monroe (Hippie Annie) and Angaleena Presley
(Holler Annie), Pistol Annies deliver a high-spirited take on life the
way real people live it. Songwriters/vocalists, the Annie collective
allows the women the freedom to explore the genre (roots music) beyond
their individual careers celebrating friendship, the rough patches and
girl power. Having recorded with both the Chieftains and Jewel, their
music has also been featured on The Hunger Games: Songs from District 12 and Beyond. They have released three albums, 2011’s gold-certified Hell on Heels, which produced the platinum single “Hell On Heels”, 2013’s Annie Up which highlights their single “Hush Hush” and the recently released Interstate Gospel (Nov 2018).

Canadian-born, Nashville-based Tenille Townes is “poised for a
breakthrough” (Refinery29). On top of an ever-growing list of accolades
that includes iHeartCountry’s next “On The Verge” artist, Amazon Music’s
“2019 Artists To Watch,” The Bobby Bones Show’s “Class of 2019,” CMT’s
“Next Women of Country,” CMT’s “Listen Up,” iHeart Radio’s “Artists To
Watch in 2019” and the inaugural class of “Opry NextStage,” Townes is
currently on Dierks Bentley’s extensive Burning Man Tour through August 2019. She’s garnered widespread attention including praise from Billboard, The Tennessean, Sounds Like Nashville, The Boot and
NPR Music, who hails, “Like her role models Bruce Springsteen and Lori
McKenna, Townes brings passion and empathy to songs that capture the
complexities of the heartland. With her distinctive, raspy voice and
hard-driving guitar style, Townes has the heart of a rocker. She’s part
of a generation of young country artists refreshing the genre by pushing
its boundaries.” Townes’ debut single, “Somebody’s Daughter,” recently
reached No. 1 on both Mediabase and Nielsen BDS Country Airplay in
Canada and is currently top 30 and rising in the U.S. Her
highly-anticipated forthcoming full-length debut album, produced by Jay
Joyce, will be released in 2019 on Columbia Nashville. Listen to Townes
discuss the album and perform several songs off of it during a recent
NPR/WXPN “World Cafe Nashville” session HERE.

Lauded by The New York Times as “an alluringly flexible singer,
fluent in classic country, blues and Southern rock, with a voice that
moves easily from tender to tough,” Ashley McBryde caught the attention
of some of Nashville’s most raucous entertainers, landing her dates
opening for Eric Church, Chris Stapleton, Miranda Lambert, Luke Combs
and most recently Little Big Town and George Strait. The Washington Post raves,
“McBryde’s blue-collar storytelling and straightforward singing set her
apart,” including a set during her debut on the Grand Ole Opry stage,
notably sharing “Girl Goin’ Nowhere,” the seminal title track from
her March 30, 2018 Jay Joyce-produced LP for Atlantic Records/Warner
Nashville. The GRAMMY, ACM and Emmy-nominated powerhouse has received
praise for Girl Going Nowhere, earning the Arkansas native critical acclaim from The New York Times, The Washington Post, Rolling Stone, Variety and more.For tour dates and more information, visit AshleyMcBryde.com or follow her on Facebook at www.facebook.com/AshleyMcBryde, Instagram @ashleymcbryde and Twitter at @AshleyMcBryde.

Caylee Hammack constantly felt like a self-described “hippie in a
hillbilly town.” “I used to pray every night as a kid, ‘God, just please
make me different. Don’t make me like everyone else,’” she remembers.
Hammack is indeed refreshingly different, proving so with
her “high-spirited, rollicking” (Variety) debut single “Family Tree.” Recently highlighted as one of 2019’s artists to watch by outlets such as The Bobby Bones Show and HITS Magazine and
with over two million streams just weeks after introducing the song to
fans, Hammack is quickly becoming one of Nashville’s most buzz-worthy
new artists among fans, radio and critics who have already applauded her
as “a dynamic singer and equally memorable songwriter, Hammack’s
soulful vocals and descriptive lyrics shine on her debut single” (Billboard). And
at only 24, she has already packed a full life into just a few years,
using fake IDs to get gigs around South Georgia, turning down a college
scholarship for a love that burned out just a few months later, sleeping
in her car when she arrived in Nashville and then losing her home in an
electrical fire. Her self-penned and self-produced songs tug on her own
life story – bad decisions, secret affairs, broken hearts, a quirky
family lineage – as she invariably turns the lemons of her daring life
into sonic lemonade. For additional information, visit cayleehammack.com