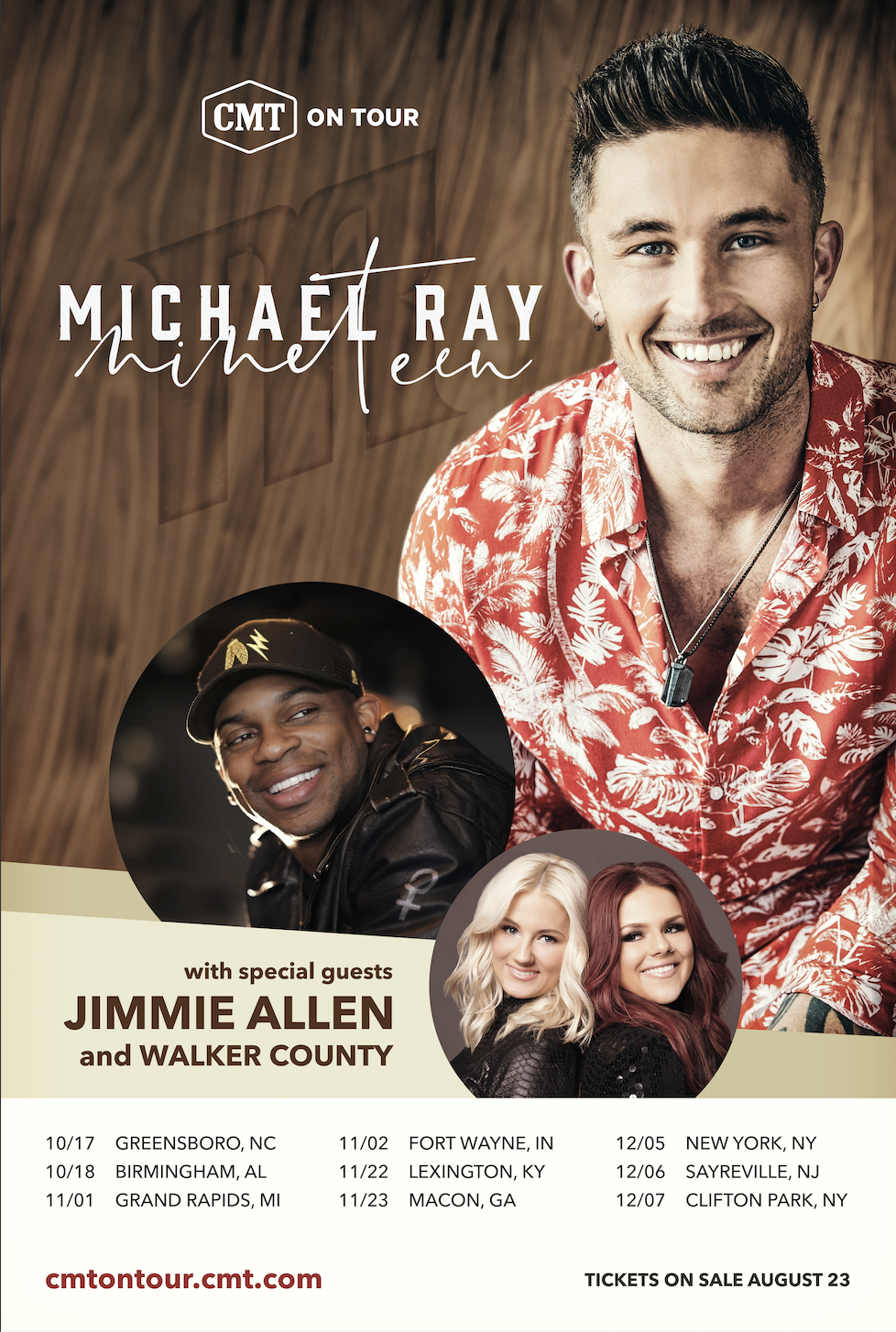 In addition to CMT On Tour, Ray is currently headlining his own 29-date
national tour, along with recent well-received festival performances in
the UK and Australia. He recently wrapped filming of his music video for
the song, “Her World Or Mine,” the latest single off of his current
album, Amos. It’s the third single from his 11-song 2018 album and follows his third No. 1, “One That Got Away.”

“Michael Ray is a proven road warrior who has developed an undeniable
connection with his fans, and we’re thrilled to welcome him as headliner
for this year’s tour,” said Leslie Fram, SVP, Music and Talent, CMT.
“Joining the line-up are two very exciting acts: Jimmie Allen, who is
quickly becoming a force to be reckoned with in country music, and
Walker County, a young duo who promises to be one of our next strong
female artists. We look forward to a fantastic tour!”

Michael Ray states: “I’m so honored to be headlining CMT On Tour with
Jimmie and Walker County. I’ve noticed that after the CMT tour, you can
see the trajectory of the year ahead, and many of the artists who have
participated in the past end up having one of the best years of their
careers. I think CMT has a great way of putting a package together that
really sets up artists for the next chapter.”

*Additional cities to be announced at a later date.

Country singer-songwriter Michael Ray was a hit right out of the box, scoring both with critics and on the charts. With Country Aircheck boasting there are “big things on the horizon for Michael Ray” and his live shows lauded by USA Today
as simply “lip-smacking good,” the Florida native backed up that praise
with two number ones from his 2015 self-titled debut album with “Kiss
You in the Morning” and “Think a Little Less.” His sophomore album, Amos, which debuted in the Top 3 on the Billboard Country Charts upon release has already spawned the hit “Get to You” and third No. 1, “One That Got Away,” which All Access
declared “an undeniable crowd pleaser.” His latest single “Her World Or
Mine” is available now and be sure to see him perform it live on
Brantley Gilbert’s “Not Like Us Tour” or his own “Nineteen Tour” now
through the end of the year. Learn more about Ray at MichaelRayMusic.com or follow him on Facebook at facebook.com/MusicMichaelRay, Instagram @MichaelRayMusic and Twitter @MichaelRayMusic.

Signed to BBR Music Group’s Stoney Creek Records, Jimmie Allen’s debut
single “Best Shot” is a certified hit, claiming the No. 1 spot for three
weeks, making history as the first time a black artist has launched a
career with a No. 1 hit with their debut single on country radio. On the
heels of that success, Allen has released his second single, “Make Me
Want To” off his debut album Mercury Lane released fall 2018. Named in tribute to the street he grew up on and the origin of his incredible journey, Mercury Lane
features a cutting-edge mix of country, rock, R&B and pop that
draws upon the influence of his family and small-town upbringing of the
critically-acclaimed rising star. Rolling Stone raved Allen’s debut “challenges the narrowly defined model of what constitutes a next big thing in country music in 2018” and The New York Times dubbed it one of 2018’s strongest, calling it “a conventional country album, filled with songs about the small details.”

He is currently on the road as support on Chris Young’s Raised on Country Tour. For more information, visit www.jimmieallenmusic.com.

From The Judds to the Dixie Chicks and the Carter Family itself, country
music’s history is steeped and rife with family duos, bands and groups.
Warner Music Nashville sister duo Walker County adds to that ‘family
tradition’ with blood-thick harmonies and solid musicianship. Born and
raised in rural Sulphur Springs, Indiana, sisters Ivy (23, lead vocals)
and Sophie (20, percussion and harmony) have been performing almost as
long as they can remember. Sophie’s hard-driving rhythms and Ivy’s
strutting, soulful vocals create a unique blend of country music that
was inspired by the sounds of middle America they grew up on. And now,
having spent years honing their skills, Walker County is ready to carry
on the heritage of country music with their modern-traditional blend.
This fall, Walker County will join Jimmie Allen and headliner Michael
Ray on the road for CMT On Tour, crisscrossing the country
while their first batch of tunes officially roll out, including the
easy-rolling rhythms and wide-open melodies in their debut “Hamptons.”