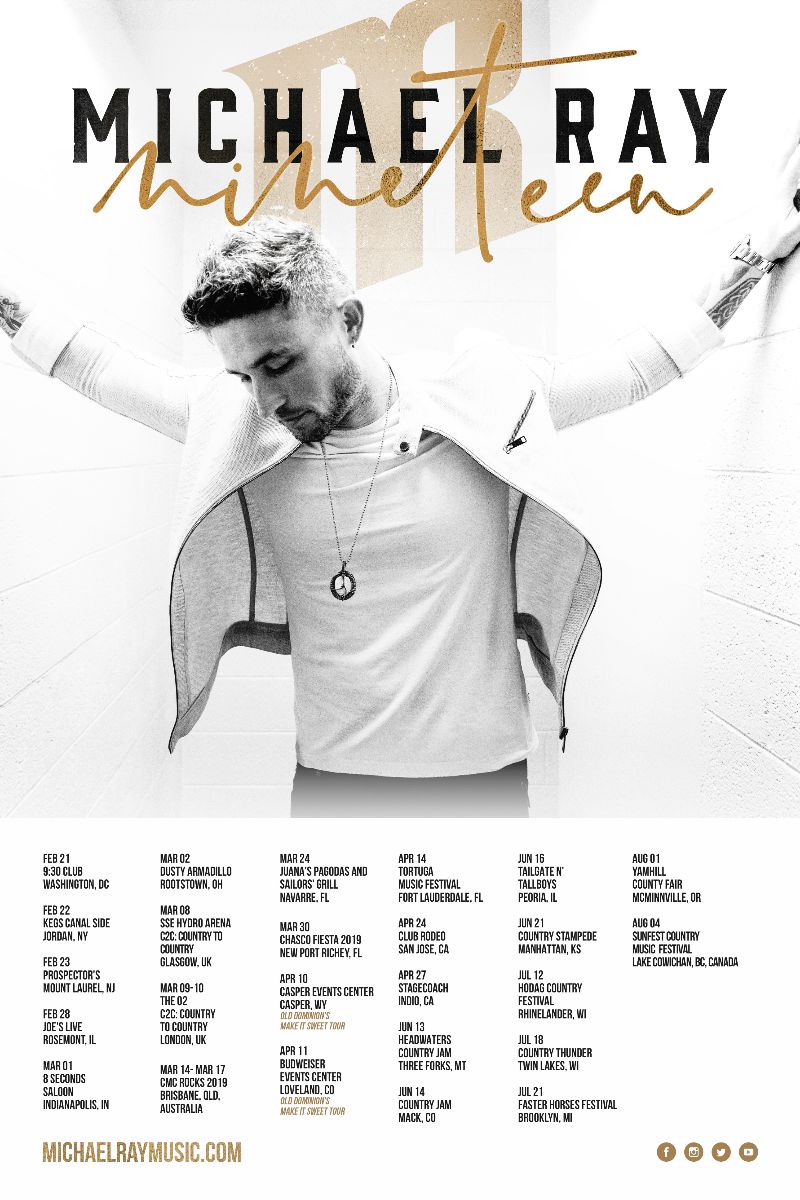 Much has changed for singer/songwriter Michael Ray
since he was named one of Country Radio Seminar’s New Faces of Country
Music in 2018. He released his highly-anticipated sophomore album Amos, which debuted in the Top 3 on the Billboard Country
Albums Chart and honors Ray’s influential grandfather in name.  He’s
made daytime television debuts on “The Ellen DeGeneres Show” and ABC’s
“Good Morning America,” as well as his late-night debut on “Jimmy Kimmel
Live.” He wowed on his first arena run playing direct support to Old
Dominion. To top off an already stellar year, Ray announced his
engagement to fellow country artist Carly Pearce.

Forging full steam ahead into 2019, the Florida native announces his Nineteen Tour,
including appearances at Tortuga Music Festival, Stagecoach Country
Music Festival and Faster Horses Festival and started the year off with a
sold-out show at The Grizzly Rose in Denver, Colorado.

Ray will make his first trip across the pond for C2C: Country to Country
Festival 2019 where fans can catch him at The SSE Hydro in Glasgow on
March 8, on the Spotlight Stage at The O2 on March 9 in London and a
second performance at The O2 on March 10. Situated in the main arena,
the Spotlight Stage features performances from country music’s brightest
rising stars between main artist sets.

The country star will also make a return to CMC Rocks 2019 before resuming shows in the U.S.

Country singer-songwriter Michael Ray was a hit right out of the box, scoring both with critics and on the charts. With Country Aircheck boasting there are “big things on the horizon for Michael Ray” and his live shows lauded by USA Today as
simply “lip-smacking good,” the Florida native backed up that praise
with two number ones from his 2015 self-titled debut album with “Kiss
You in the Morning” and “Think a Little Less.”  His sophomore album, Amos, which debuted in the Top 3 on the Billboard Country Charts upon release has already spawned the hit “Get to You” and Top 15-and-climbing single “One That Got Away,” which All Access declared
“an undeniable crowd pleaser.” Inspired by his rescue dog Wrigley,
Michael Ray created the charitable initiative Wrigley Cares: Helping
Animals in Need, collecting donations for local animal shelters at every
stop on his “Get To You” Tour in partnership with Zappos For Good.
Michael Ray is currently headlining select dates before taking his music
across the globe to play at CMC Rocks 2019 in Australia. He will also
be playing a number of fairs and festival dates this summer, including
Tortuga Music Festival, Stagecoach, Country Thunder and Faster Horses.
Learn more about Ray at MichaelRayMusic.com or follow him on Facebook at facebook.com/MusicMichaelRay, Instagram @michaelraymusic and Twitter @MichaelrayMusic.