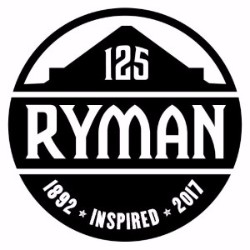 “From its beginnings as a church to its years as the home of the Grand
Ole Opry to its revival as the coolest concert venue in the world, the
Ryman has a story like no other building – anywhere,” Mayor Barry said.
“I’m grateful for everything the Ryman means to Nashville, and I’m
excited to celebrate its first 125 years while looking forward to many
more.”

“As the owners of this Nashville treasure, we view ourselves as both the
stewards and protectors of its rich and storied legacy,” said Reed. “We
are thankful that Mayor Barry has chosen to recognize not only the
historical significance of the Ryman but also its continued influence on
Nashville’s thriving music and tourism industries.”

“If you think about it, music has had a great history here, but the real
purpose of this building was to save people… and 125 years later it’s
still saving people,” expressed Gill. “This place just has spirit that
you can’t even put into words. It really is a magical place. The very
first time I ever sang in this building it was just me and a guitar, and
it was one of the most majestic experiences I’ve ever had in my life. I
really felt that spirit move through me. This place more than any place
I’ve been…I really felt that spirit. Whether I play here with a
seven-piece band or a bluegrass band… no matter what you throw at this
place it takes it and elevates it.”

About Ryman Auditorium
A National Historic Landmark, Ryman Auditorium was built as a tabernacle
by Captain Thomas G. Ryman in 1892, served as the home of the Grand Ole
Opry from 1943-74 and was completely renovated in 1994. The Ryman is
open for tours during the day and at night offers a wide variety of
entertainment performances, just as it has for over 125 years. The venue
was voted the 2010, 2011, 2012, 2013, 2014, 2015 and 2016 Pollstar
Theatre of the Year and recently took home its fifth-consecutive CMA
Venue of the Year Award. Ryman Auditorium is owned by Ryman Hospitality
Properties, Inc. (NYSE: RHP), a Nashville-based REIT that also owns and
operates the Grand Ole Opry, and 650 AM WSM. For more information,
visit ryman.com.