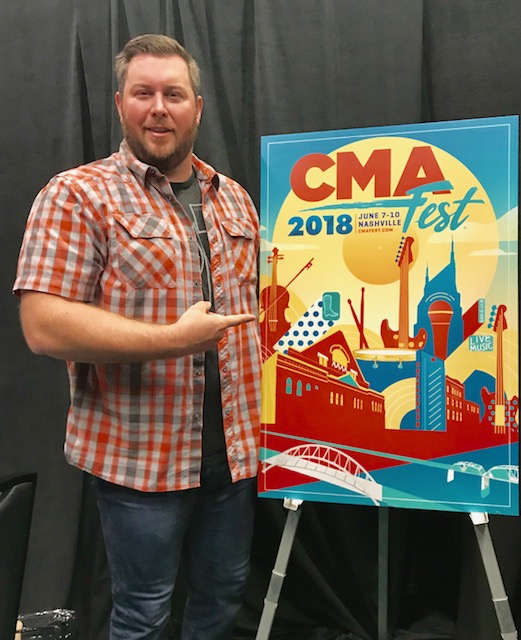 Matt Rogers is making sure he will reach
the eyes and ears of as many potential fans as possible during CMA Fest
2018.  The Eatonton, Georgia, native now
calls Nashville ‘home,’ but devotes a large part of every year to touring far
and wide.

His latest project is an EP titled ‘Richest
Place On Earth’ and he recently released the music video for the title track
exclusively on Raised Rowdy.  The song
recently won a top award in the Music City SongStar competition.

I caught up with Matt in between some of
his scheduled CMA Fest appearances.

Preshias Harris:You gave up a career in the medical career to move to Nashville.
Why did you do that?

Matt Rogers:Music has always been there for me. When I was growing up, I played in church.
I was in a youth ‘praise and worship’ band, I had a garage band, I had a little
group in college. I started writing in college and when I moved home, I started
playing more and more often in bars and clubs and I put a band together.  I didn’t really know what I wanted to do when
I grew up.  I was really fumbling through
different careers and different jobs, things like that, until I finally got a
great job and a great career.  But I had
a goal to move up here [to Nashville] and I had a lot of support to move up
here, so I saved up some money and set my plans and my goals out. And I
‘saddled up’ and moved on up.

PH:What was
your time frame for that move?

MR: I was already coming up here often, monthly or
bi-monthly, to take meetings, writing sessions, things like that. But I’d made
a plan. I said, ‘In a year-and-a-half, I’ll move to Nashville.’ So I made a
plan and started meeting people who could help me with that transition. At the
end of that year, I found a place to rent, and I haven’t looked back since.

PH:Tell me
about your EP, ‘Richest Place On Earth.’

MR: It’s a personal story. For the first
year and a half I was up here, I wrote about two hundred songs.  So I wanted to narrow it down to just a few
that would really describe who I was, not only as an artist but as a person.  I wanted a cohesive project that you can
listen to, start to finish, and have a better idea about who I was after you
got through listening to it.

PH:What
made you pick that title?

MR:It’s
about me leaving that full-time job in Georgia and moving up here and taking
the chance to do what I was wanting to do. To do what I think I was meant to
do. That’s the story. I want to live out loud and break the mold.  I want to leave a story behind to be told.

PH:You’re
playing about 200 dates a year.  What are
the pro’s and cons of touring so much?

MR: Two hundred dates a year is a bunch!
But I feel you’ve just got to get out there and grind. I mean, if you really
want it, you’ve got to get out there as much as you can. You’ve got to meet
some new fans. You’ve got to try to introduce them to your music. You’ve got to
make your own name in this business. There are no short cuts and I think
authenticity and being genuine is the only way to really do it.  The cons?
You’re never at home.  And you
sacrifice a lot of personal relationships.
It’s hard for a lot of people to understand what you’re trying to do,
especially at this point in the game.
It’s tough. And you have so much work to do when you DO get back home
before you head out again. So it’s definitely tough, but it’s certainly worth
it.

PH:Is this
your first CMA Fest?

MR:No, it’s
not my first.  Actually this is my third
year, but this is the most involved I’ve ever been. This is the busiest year
I’ve ever had. I’m playing every day. I started yesterday, on opening day. I
kicked it off on Channel 5 at the Riverfront Stage at 6:30 in the morning.
Today, we get to play at 2:30 pm on the Spotlight Stage. Tomorrow evening,
we’re at the Maui Jim Stage at the Hardrock. Then Sunday, we’re at the
Wildhorse Saloon. So I’m getting to play every day and getting to perform for
some of these people I’ve met over the past two years, so it’s going to be very
exciting.

PH:Who
would be your ideal person to share a stage with, and why? (Living or dead!)

MR:That’s a
tough question!  There are so many folks
I look up to. So many folks I respect and I really dig their music. I guess in
today’s world, someone who’s still really doing it and is still really
relevant, I would have to say Zac Brown, just because I’m from Eatonton,
Georgia, where he had a place on Lake Oconee, and I got to see that whole
ascent happen for him, his whole rise to the top, and he is responsible for
introducing me to a bunch of different genres, a bunch of different sounds.
Things that probably I would not have found on my own. There’s kind of lot of
influence from him in my songwriting.

PH:What has
been one of the biggest obstacles you’ve had to face to get from Point A to Point
B?

MR:Well,
there are several. There are bunch of things you have to hurdle in this
business. Just trying to stand out and be a little bit different is tough on
its own. And for this to be Music City, it is awful hard sometimes just to get
someone to listen to your music.  They’ll
take a quick glance at pictures or social media or things like that, and that’s
how they make up their mind a lot of times, before they even get to the songs.
So I like to see the fact that it is moving back to the music and the
songwriting. But it’s awful hard to just be yourself here and to not doubt the
process.

PH:What is
the one thing you’re looking forward to for the rest of the year?  What puts a smile on yourself and makes you
get up and go?

MR:Some of
the things I’m looking forward this year, I’ve got quite a few new tour dates,
new regions that we’re going to be breaking into, and I love getting to meet
new fans, new people, and introduce them to my music.  Also, I have several co-writes that are
really exciting with bigger songwriters, hit writers, and rooms that I’ve been
trying to get into for the past couple of years.  Also, I’m recording some new music, I’ve got
some new music coming out soon, probably a single first.

PH:With two
hundred dates on the road, it must be hard to find time to record.