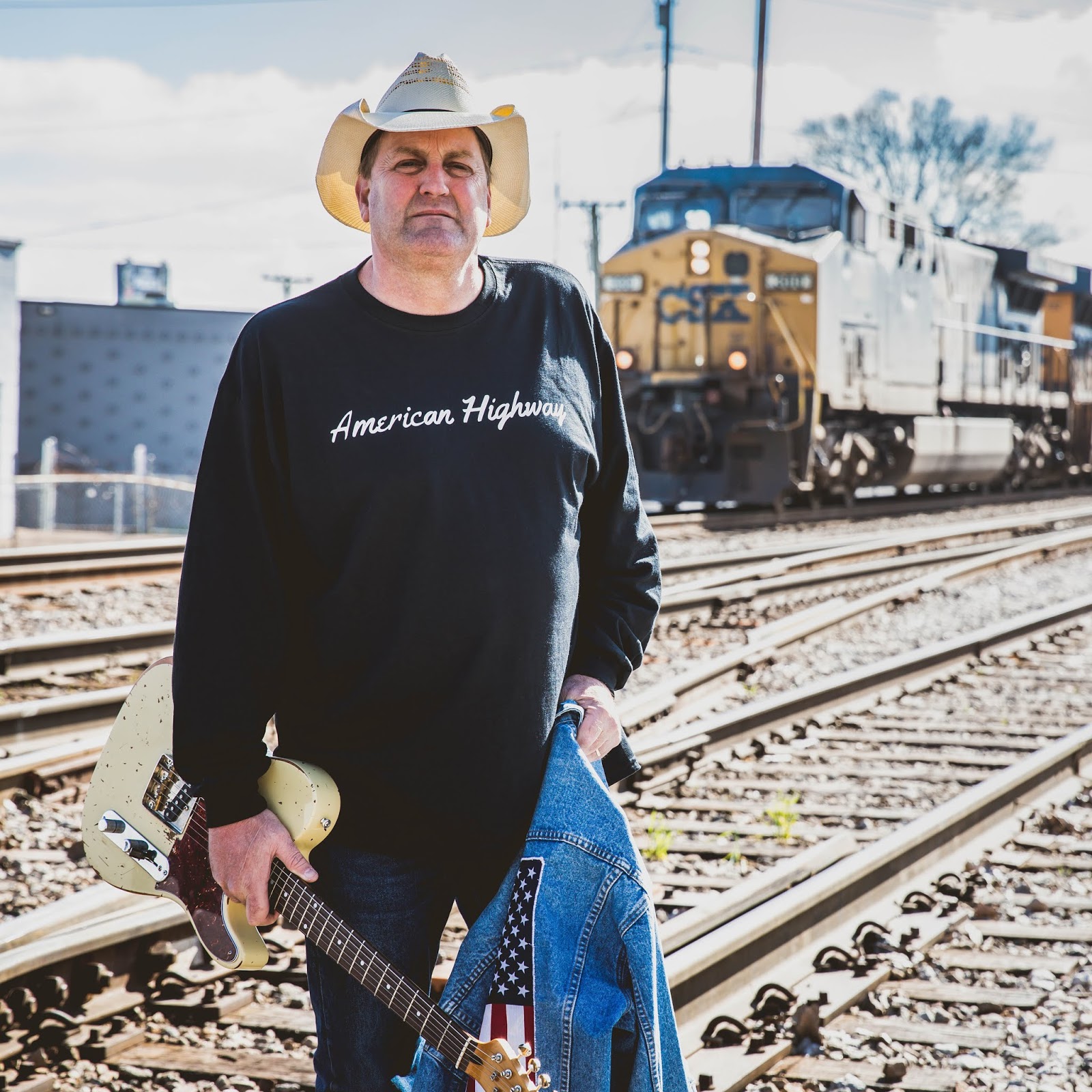 Answer:  Imagine a cross between Hank Williams and
Bob Dylan, and what you get is me, Marty Brown. I sing like Hank Williams, but my writing is more like Bob Dylan, I
guess. I don’t know. There’s really
nobody like me, you will just have to give my music a listen and make up your
own mind. If you like music that’s cool
and from the heart, then you will like my music.

Answer:  I spent most of last year, 2018 that is, doing
what I do best which is songwriting. I
wrote myself right into a record deal with Plowboy Records. I am really excited about that. I have also been nominated this Spring for
the Kentucky Music Hall of Fame. It
would be an honor to me and to my parents for me to get that award. And, my song, I’m From The Country, is up for the 5 million air award, meaning
it’s had 5 million air spins. I get that in May at BMI when my album, American
Highway, is released off of Plowboy Records (MAY 17).

Answer:  My latest CD comes out this May 17th, and it’s
called, AMERICAN HIGHWAY. So far, the
reviews are great! I’m really proud of
this album. I think it is my best album
yet. It’s my first studio album in over
20 years. I cowrote all the songs with
Jon Tiven, a Producer/friend of mine from New York. And, one of the songs on the album I cowrote
with Jon and my son, Marty Brown, Jr. So, that is really special to me to have a song with my son on one of my
albums. That’s a first.

Answer:  The title for the CD, American Highway, is
actually the name of one of the first songs I wrote for the album. I just thought that title seemed to fit where
I am at in my life and in my music career. I am a country music singer/songwriter. I have had three albums on MCA Records in the 90s and one album on High
Tone Records. Rolling Stone Magazine called
me, Too country for country music. So, after my wife tricked me into being on
America’s Got Talent and I had what I called a moment with the Bob Dylan song,
Make You Feel My Love, and we made all those trips to San Antonio and New York
City, I just thought to myself, and this is the chorus to the song/cd title:

This American
Highway I’m on

If you’re going
my way come on

I got a
windshield view of it all

Cruising
up and down this old asphalt

On this
American Highway

I’ve seen it all man, I’ve been to New York City,
Alaska, Texas, California, since the TV show, and I have really travelled, and
we have met so many people, good people, and I just think the title, sums up my
journey and where I am at in my life. If
you want to take this journey with me, then COME ON board!

Answer:  Yes. I write all the songs for my albums
myself. I have a co-writer, Jon Tiven,
but these songs are my ideas come to life through music. Being a writer you have to be very
prolific. You have to be able to capture
lightening in a bottle, so to speak. Songs are like God’s little gifts to you, and if you don’t write them
down that moment is gone.

Answer:  The first single that Plowboy Records
released from the album is called, Umbrella Lovers. I wrote part of this song when my wife and I
were in New York for AGT. I was thinking
about how out of place we were since we are from Kentucky, but we were so in
love, we didn’t care what anyone else thought. So, I thought about two people on the streets of New York, getting caught
in a rainstorm and huddling together under an umbrella, because that happened
to me and my wife, Shellie, and they are so enamored of each other they don’t even
care if they are getting wet. We were
Umbrella Lovers.

Answer:  My last CD, Here’s To The Honkytonks on High
Tone Records, was 20 years ago. There’s really
no comparison because I’m a much better writer then I was back then. Also, I was labeled as a throw-back artist,
so the music I am writing and recording now has a country feel, a blues feel,
and probably fits under the umbrella of Americana as much as it does Country.

Answer:  It just makes you happy. It makes me want to dance. It’s got that wind-shield wiper groove to
it. You can set your windshield wipers
to the beat of the song. It makes you
want to fall in love, if you’re not already.

Answer:  I honestly have no idea. That’s up to the label, Plowboy Records. There’s a couple of good ones that I might
want to hear on radio like, I’m on a Roll (Better Than It’s Ever Been). But, a second release hasn’t been discussed
at this time. We just put the first single,
Umbrella Lovers, out in February 2019.

Answer:  I like songs that are the truth and they
tell a story.

Answer:  I love all my songs. My songs are like my children. Each one is
special. I don’t really have a favorite.

Answer:  I have complete creative control over my
music.

Answer:  I get my drive from my daddy. I don’t know any other way but then to get it
done. I remember when I first started
coming to Nashville, I didn’t have money for a hotel room. So, I slept in the alleys
on Music Row. I wasn’t a homeless person
or anything, but I wanted it so bad to make it in this business. I didn’t have anything give to me.

Answer:  I had one couple come to one of my concerts
and tell me that they were thinking about getting a divorce, but after they saw
me and my wife, Shellie, on America’s Got Talent, they decided to give their
marriage one more chance. I hope they
made it. I think that is pretty special.

Answer:  Well, I didn’t hear Johnny Cash or Loretta
Lynn records, I heard my daddy singing Johnny Cash and my momma singing Loretta
Lynn. My parents were my music
influences. I liked John Denver, and I
finally got to play a show with him in Owensboro, Kentucky after I signed my
first record deal. I will never forget
the first time I met him (John Denver). He looked over from the dressing room chair and he said, well, I guess
you’re the new boy on MCA we’ve been hearing about. I couldn’t believe it, I was sitting next to my
hero, John Denver. It was one of the great moments in my life.

Answer:  Well, it’s not going to return to
traditional country. I’ve had to adapt
to the times, because the days of traditional country music being played on the
radio have come and gone. That ship has
sailed. I really like this new music I
am writing and recording right now. I’m doing
it for me. I think it’s some of my best
writing ever.

Answer:  I like writing and recording my music the
best. I know you have to do the
interviews, and I enjoy meeting people like yourself because you help me to get
my music out to my fans and the people, but if I could just stay home and write
and record, that’s what I would like to do. I like touring, too, but my wife, Shellie, she usually comes with
me. We have played the Alaska State Fair
four times in the last few years. The
people in Alaska are really great and very appreciative of country music.

Answer:  I have toured in Switzerland and England in
the 90s. I think I will probably play
again overseas when the time is right.

Lamitschka:  What was your big break that got you
into the music business?

Answer:  I just kept knocking on doors. I saw that Trust Jesus sign on the sidewalk
on Music Row, and I just never gave up on my music.  BMI was also a huge supporter of my music and
helped me make the contacts I needed to break into the music business.

Answer:  I’m getting ready to receive my 5 million
airplay award from BMI for a song I wrote called, I’m from the Country and I Like
It That Way. I guess that is my proudest
achievement so far in the music industry.

Lamitschka:  Who is your biggest critic,
yourself or others?

Answer:  I like to make bird boxes and work in my
shop. I have a man cave out behind our
home in Franklin, Kentucky. It’s a work
in progress. I’ve got a refrigerator out
there. Everything but the kitchen
sink. It’s where I work on my lawn mower
or my truck.

Lamitschka:  What message would you like to
send your European fans?

Answer:  You can download my new album, American
Highway, on Amazon, right now! Pre-order
date is April 19th, but they can own it on May 17th! So, go buy it!

Lamitschka:  Describe what a perfect day is like for
you.

Answer:  Sitting on my back porch in Kentucky
watching my birds. I have birds
everywhere. Purple Martins that fly all
the way from South American just to nest in the gourds I have made for
them. I have blue birds in the bird
boxes I made. One of the blue bird boxes
was made by my Dad, so they love that!