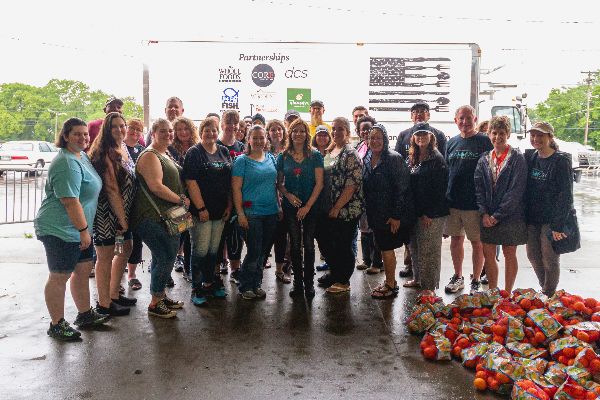 Martina McBride’s global charity initiative, Team Music Is Love (TMIL), hosted a wildly successful event at The Fairgrounds Nashville on Friday, June 7th
to benefit the local community. This event included a food drive, book
giveaway and storytelling, a diaper giveaway, and an essential item
giveaway, which included items such as tooth brushes and toothpaste.

The
Nashville Fairground neighborhood was selected as the location for this
event due to its status as a food desert in Nashville – most people who
live there lack easy access to affordable fruits, vegetables, and whole
grains, as the closest grocery store is a two mile walk away.

To help,
TMIL, in partnership with One Gen Away, brought in a truckload of over
20,000 pounds of locally sourced fresh produce and locally saved canned
goods during the food drive, providing approximately 10,000 meals which
will feed 380 families. This incredible feat will surely impact the
local Nashville community given that 1 in 6 adults and 1 in 5 children
in metro Nashville are food insecure – meaning they lack reliable access
to nutritious food and may survive from fast food and convenience
stores.

TMIL also
partnered with The Word Wagon to give summer reading books to kids – two
low income Nashville metro schools will receive free books – and
partnered with the Nashville Diaper Bank to give diapers to families in
need.

Of course,
this event wouldn’t have been a success without the help of volunteers.
People from 20 different states and 3 different countries showed up to
help give away flowers, balloons, lemonade, and fill grocery carts with
fresh foods and canned good staples.

Multiple
Grammy® nominee Martina McBride has sold over 18 million albums to date,
which includes 20 Top 10 singles and six #1 hits. 2017 marked a
milestone in Martina’s illustrious career when she hit her 25th year of touring. Last year, Martina released a new Christmas album, It’s The Holiday Season,
that features her favorite Christmas standards, all with the backing of
a symphony, and also brought back her “The Joy of Christmas Tour,” this
time each with a local orchestra. McBride has earned more than 15 major
music awards, including four wins for Female Vocalist of the Year from
the Country Music Association and won three Academy of Country Music for
Top Female Vocalist. Martina has been awarded 14 Gold Records. Nine
Platinum honors, three Double Platinum Records, and two Triple Platinum
Awards. Martina was awarded the Covenant House Beacon of Hope Award and
Music Business Association’s prestigious 2015 Harry Chapin Memorial
Humanitarian Award for her philanthropic efforts on behalf of domestic
violence. Martina has released two books – the first, Around the Table,
a full-color illustrated collection of her favorite recipes, hosting
tips, practical menu planning advice, and themed décor inspiration. She
released her second book, Martina’s Kitchen Mix: My Recipe Playlist for Real Life, in October 2018.

About Team Music Is Love:

Since 2011,
Martina and her fans have partnered together on several successful
fundraising and volunteer projects for various causes ranging from
hunger relief to cancer research, combating domestic violence, and
helping children in need. Team Music Is Love has attracted
thousands of people from around the nation and the world to join
Martina’s global charity movement. Some of the projects started by
Martina and her team have included the initiation of a breast cancer
research grant at Vanderbilt Ingram Cancer Center in Nashville, TN, the
construction of a new playground for children of all abilities in
Atlanta, GA, and a therapeutic music program providing musical
instruments to orphaned children at Covenant House shelter in Guatemala
City, Guatemala. For more information, please visit: TeamMusicIsLove.com.