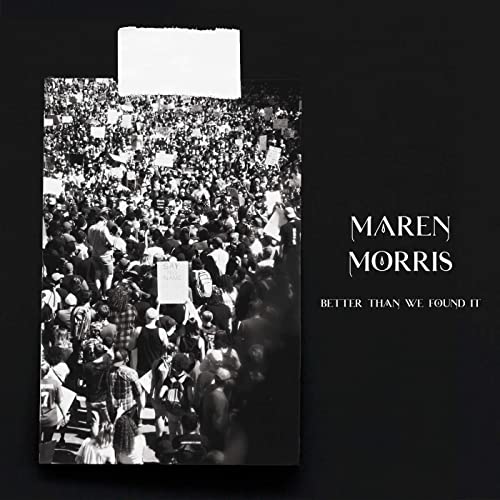 Maren Morris Better Than We Found It Out

Maren Morris Better Than We Found It Out

Man, this shit’s unflatterin’, all up in my head again

I don’t feel myself right now, maybe I should just lay down

If vanity’s my vitamin, well, I don’t feel the difference

I don’t like myself right now, gotta find a way out’

Maren Morris is one of the leading voices of country music today. Her life in music began quite early. Most of her time as a child was spent in her parent’s salon and for her music began to become her world ever since her father got her a guitar. She was twelve then and since then she has been chasing that one zing called music and making it big every day.

She began her music recording career in 2005 when her music album Walk On was released by Mozzi Blozzi Music.

Her third album, Live Wire was released in 2011 by Mozzi Blozzi Music.

Her next album, All that it takes was released in 2017 by Smith Entertainment.

What you feel is natural

But I don’t wanna feel this anymore

Pick yourself up off the kitchen floor

What you waitin’ for?

Her musical passion initially took her through all bars and clubs of Texas which would let her in.

Encouraged by Kacey Musgraves, she left her hometown and moved to Nashville when she was 20-year-old. She landed on her first disappointment when she auditioned and got rejected from both The Voice and The American Idol.

Girl, won’t you stop your cryin’?

I know that you’re tryin’

Don’t you lose your halo

Draw your comparisons, tryin’ to find who’s lesser than

I don’t wanna wear your crown, there’s enough to go around

After failing in auditions, Morris began writing songs for her peers and contemporaries like Tim McGraw, Clarkson, and so on.

Yet she kept singing and released her eponymous EP on Spotify in late 2015. It was only when the album racked up 2.5 million streams a month, did Columbia Nashville offer her a contract term, a month later.

Becoming an artist was never a conscious decision and things took a turn when her first major album, Hero was released. My Church jumped to the number one slot and earned her a Grammy for it later.

Morris started doing opening for Keith Urban and opened for many others in the process.

A lot of tours eventually came up and Morris released her second major album, The Girl which brought her many accolades including nominations at the 63rd Grammy Awards.

What you feel is natural (natural)

You don’t gotta put up with this anymore (anymore)

Pick yourself up off the kitchen

It was in 2017 that Ryan Hurd walked into her life and the pair began a new chapter together in March 2018. A long journey is already done as she awaits her another long term on the roads, stages, and in the hearts of people after welcoming her son Hayes into their lives.