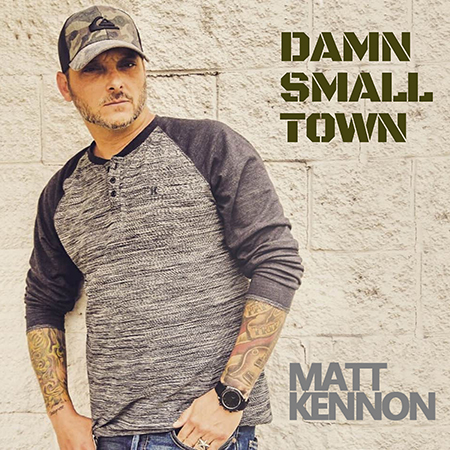 “This is an uptempo for once and a song that Grammy Award winning
Producer Paul Worley and I had to cut,” Matt Kennon says with a smile.
“This song clinched it for us after years of discussing working
together, and we hope the fans love it as much as we do!”

This song is about being broken up with in the town you live in. You
can’t help but run into her everywhere and there’s no getting over her
except outside that “Damn Small Town”. This is a story that we’ve all
been through at some point.

Kennon is best known for his emotional, heart wrenching and true to life
songs that tug at listeners heart strings and bringing attention to
subjects that are uncomfortable. This tune takes listeners back in time
through any small town and the loss of a love and not being able to
avoid memories around every corner.

Matt Kennon knows the power of a great song. It can
stir your emotions, move you to tears, motivate you to action, and in
some cases even save your life, as Matt has seen firsthand in his career
with songs like “The Call,” “You Had To Pick On Me,” and even his
latest song, “Wasn’t It Enough.” For him, music is about the message,
and time and again he’s written thought-provoking and heart-tugging
songs that have racked up impressive chart numbers and even more
impressive sales: throughout the course of his career he’s already sold
300,000 singles and 30,000 albums. The Atlanta native is inspired by and
writes about things close to his heart, and often finds himself writing
songs with emotional messages. His songs have definitely hit home with
many struggling with issues like suicide, post-traumatic stress, and
bullying. The Atlanta native devoted the last two-plus years to a
special anti-bullying campaign he developed and took to 83 schools in
seven states. Through partnering with several sports foundations around
the country, including Alabama coach Nick Saban’s charity, Nick’s Kids,
Matt was able to reach 150,000 students with a powerful anti-bullying
message. The campaign was just one example of how apt Kennon is at
dialing in to the emotions fans are experiencing, and for proof of that
connection, one need not look any further than the iTunes chart, where
Matt has been a Featured Artist for the last five years with each of his
independent releases. His explosive live shows no doubt fuel those
sales as well, as Kennon is a powerful live performer with thousands of
shows under his belt on stages across the country. Throughout the course
of his career he’s shared the stage with high profile artists
including, Kenny Chesney, Blake Shelton, and Train, Darius Rucker, Uncle
Kracker, Lee Brice, and The Band Perry, among others.Powerful social
media interaction has moved the needle for Kennon.  The video for “The
Call” recently reached an amazing seventeen million accumulated views. A
successful songwriter in his own right, with outside cuts by artists
such as Randy Travis, (who recorded his song “Turn It Around,”) and many
others. The soulful singer also writes with many of Nashville’s top
writers regularly.