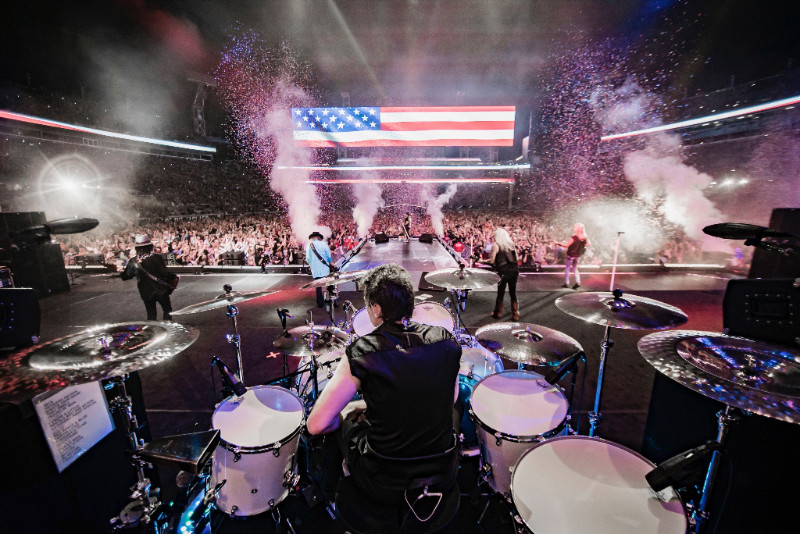 and The Marshall Tucker Band Join in Jacksonville

“There are a lot of people who thought this was going to be our last
show, forever, here in Jacksonville,” lead singer Johnny Van Zant told
the Times-Union. “That’s not true. We still have places that we
need to do.” Added Rickey Medlocke, “We’ve got fans all over the
world…You can’t just say we’re only going to do the United States and
then shut it down. Those people would be so upset.”

No
one left TIAA Bank Field upset — even after a weather delay in the
middle of Kid Rock’s set — as Skynyrd’s 90+ minute show
featuring classic hits such as “Simple Man,” “Gimme Three Steps,” and
“What’s Your Name,” as well as deep cuts such as “The Ballad of Curtis
Lowe” kept fans on their feet the entire show. The evening included a
moving tribute of “Sweet Home Alabama” to the song’s co-writer and
original Skynyrd band member Ed King. The show’s finale ended with a
stadium-sized sing-along of “Free Bird.” The evening left no doubt why Rolling Stone magazine
calls them one of the 100 Greatest Bands of All Time. The unforgettable
homecoming was filmed for future release. Details will be announced
soon.

Earlier this year Skynyrd announced that after a career that has spanned
more than 40 years and includes a catalog of more than 60 albums with
more than 30 million units sold, they would embark on their final tour.
Produced by Live Nation, the career-concluding two-year farewell tour
will have logged over 50 stops by the end of 2018.

The band returns to the road for the second leg of 2018
dates on Saturday, Sept. 22 for this year’s two-day iHeartRadio Music
Festival in Las Vegas. The band are
part of a star-studded lineup at T-Mobile Arena that includes Justin
Timberlake, Jack White, Carrie Underwood, Mariah Carey, Jason Aldean,
Sam Smith, Luke Bryan and more. Fans can visit iHeartRadio.com/Tickets to
purchase tickets. For those unable to attend, the 2018 iHeartRadio
Music Festival will be broadcast live on iHeartMedia Contemporary Hit
Radio (CHR) stations across the country that weekend including the
iconic Z100 in New York, KIIS-FM in Los Angeles, Y100 in Miami, KISS FM
in Dallas, Chicago and Boston, as well as many more. The CW Network will
exclusively live stream the mega-concert via CWTV.com and The CW App and broadcast the two-day, televised special on October 7 and October 8.

The tour derives its name from the band’s “The Last of the Street
Survivors” and their fifth studio album Street Survivors that is
certified multi-Platinum by the RIAA and includes the Platinum-certified single, “What’s Your Name.”

The Last of the Street Survivors Farewell Tour marks a big moment for generations of fans, as Lynyrd Skynyrd has been touring consistently since the 90s. The band, that USA Today called
the “whiskey-soaked genre’s most popular and influential crew,” is
ready to rock one last time. The farewell tour will take original member
Gary Rossington joined by Van Zant, Medlocke, Mark “Sparky” Matejka,
Michael Cartellone, Keith Christopher, Peter Keys, Dale Krantz
Rossington, Carol Chase and special guest Jim Horn across the country
over the next two years.

Tickets for the second leg of 2018 shows are sale now at LiveNation.com.
The farewell tour will continue to take the band across the country
through the remainder of this year and all of next year, giving fans one
last unforgettable night of classic American Rock-and-Roll. Skynyrd’s
2019 tour dates including stops in Europe and South America will be
announced soon.

+ Part of the iHeartRadio Music Festival

VIP packages are available for all dates.  Details available at lynyrdskynyrd.com.

Original members Ronnie Van Zant, Bob Burns, Allen Collins, Gary
Rossington, and Larry Junstrom formed the band in 1964, originally known
as My Backyard, the band changed to its famous name in the early 1970s,
and became popular in the Jacksonville, Florida area, where the
original members were from. They signed with Sounds of the South Records
in 1972,
and released their self-titled disc the following year. The album that
featured “Free Bird,” arguably the most-recognized single in the
Southern Rock genre, has sold more than 2 million units since its
release. Later down the road the band recorded iconic tracks “Sweet Home Alabama” and “What’s Your Name.”

The band’s story took a tragic turn in October 1977 when a plane crash
took the lives of Van Zant, Steve Gaines, backup singer Cassie Gaines,
and several of their road crew. The band took a decade-long hiatus
before reuniting for a tour and live album, Southern by the Grace of
God. Since then, the band has toured and recorded extensively, with
their most recent release being Last Of A Dyin’ Breed. The
band’s current line-up includes original member Rossington, Johnny Van
Zant, Rickey Medlocke, Mark “Sparky” Matejka, Michael Cartellone, Keith
Christopher, Peter Keys, Dale Krantz Rossington and Carol Chase. The
band was inducted into the Rock and Roll Hall of Fame in 2006.