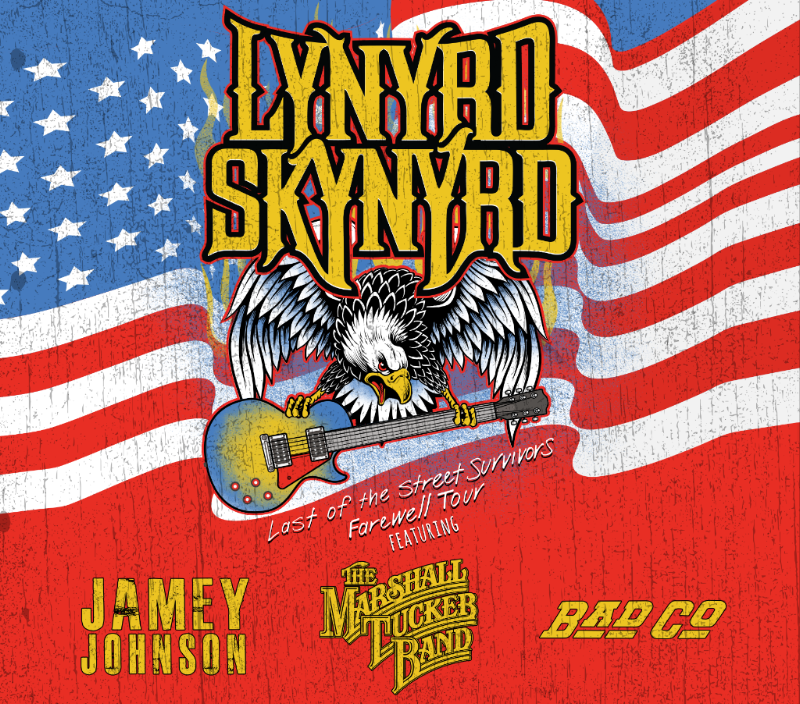 SET TO PERFORM AT 2018 IHEARTRADIO MUSIC FESTIVAL ON SATURDAY, SEPT. 22

Tops Out at 50+ Stops Across the US and Canada

NASHVILLE, Tenn. – Earlier this year Southern Rock icons Lynyrd Skynyrd
announced that after a career that has spanned more than 40 years and
includes a catalog of more than 60 albums with more than 30 million
units sold, they would embark on their Last of the Street Survivors Farewell Tour. Produced by Live Nation, the career-concluding two-year farewell tour will have logged over 50 stops by the end of 2018.

The first leg of dates this year kicked off Friday, May 4 in West Palm Beach, FL at the Coral Sky Amphitheatre. The South Florida Insider
said of opening night, “…this was a kick ass rock concert that
delivered all the energy, feel, and attitude that you’d ever want and/or
need from a rock band. It was lit!”

Tickets for the second leg of 2018 shows go on sale to the general
public starting Friday, June 15 at 10:00 a.m. local time at
LiveNation.com. The farewell tour will continue to take the band across
the country through the remainder of this year and all of next year,
giving fans one last unforgettable night of classic American
Rock-and-Roll. 2019 tour dates will be announced soon.

Citi® is the official presale credit card for the Last of the Street Survivors Farewell Tour.
As such, Citi® cardmembers have access to purchase U.S. presale
tickets, which are available beginning Tuesday,June 12 at 10:00 a.m.
local time until Thursday, June 14 at 10:00 p.m. local time through
Citi’s Private Pass® program. For complete presale details visit www.citiprivatepass.com.

“This farewell tour has already been the perfect end to an incredible
run and we are not even halfway through the tour yet! There is still
lots of road to go and lots of fans to see one last time,” said Gary
Rossington, original and founding member of Lynyrd Skynyrd. Lead
vocalist, Johnny Van Zant added, “we are having a blast! Every crowd so
far has been incredible. The energy and excitement they have been giving
us has been like fuel on a fire. We can’t wait to get out there each
night and burn it up!”

It was also announced today that the Rock and Roll Hall of Famers will
perform on Saturday, Sept. 22 at this year’s two-day iHeartRadio Music
Festival in Las Vegas. The band join a star-studded lineup at T-Mobile
Arena that includes Justin Timberlake, Jack White, Carrie Underwood,
Mariah Carey, Jason Aldean, Sam Smith, Luke Bryan and more. Fans can
visit iHeartRadio.com/Tickets to
purchase tickets. For those unable to attend, the 2018 iHeartRadio
Music Festival will be broadcast live on iHeartMedia Contemporary Hit
Radio (CHR) stations across the country that weekend including the
iconic Z100 in New York, KIIS-FM in Los Angeles, Y100 in Miami, KISS FM
in Dallas, Chicago and Boston, as well as many more. The CW Network will
exclusively live stream the mega-concert via CWTV.com and The CW App and broadcast the two-day, televised special on October 7 and October 8.

Numerous friends including but not limited to: Hank Williams Jr, Bad
Company, ZZ Top, Jason Aldean, Kid Rock, Charlie Daniels Band, Cheap
Trick, Jamey Johnson Marshall Tucker Band, 38 Special, Blackberry Smoke
and Blackfoot, will continue as special guests on the farewell tour. The
tour derives its name from their new song, “The Last of the Street
Survivors” and the band’s fifth studio album Street Survivors that is certified multi-Platinum by the RIAA and includes the Platinum-certified single, “What’s Your Name.”

The Last of the Street Survivors Farewell Tour marks a big moment for generations of fans, as Lynyrd Skynyrd has been touring consistently since the 90s. The band, that USA Today called
the “whiskey-soaked genre’s most popular and influential crew,” is
ready to rock one last time. The farewell tour will take original member
Rossington joined by Van Zant, Medlocke, Mark “Sparky” Matejka, Michael
Cartellone, Keith Christopher, Peter Keys, Dale Krantz Rossington,
Carol Chase and special guest Jim Horn across the country over the next
two years.

The Southern Rockers are best known for the RIAA Platinum-certified
“Sweet Home Alabama” and self-proclaimed signature song, “Free Bird,”
that Rolling Stone said was “easily the most requested live
song in existence.” With everlasting hits such as “Simple Man,”
“Gimme Three Steps,” “What’s Your Name,” “Call Me The Breeze,” “You Got
that Right,” and more, it is easy to see why Rolling Stone named Lynyrd Skynyrd one of its 100 Greatest Bands of All Time.

Stay tuned for future announcements and specific tour line-ups in your markets.

Last of the Street Survivors Farewell Tour presented by SiriusXM

+Part of the iHeartRadio Music Festival

*Not presented by SiriusXM

VIP Packages will be available for all dates.  Details available at lynyrdskynyrd.com