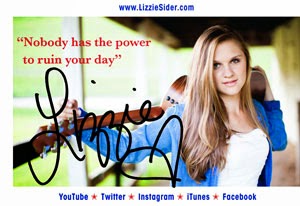 NASHVILLE, TENN. / NEW YORK, NY (October 7, 2014) — LIZZIE SIDER, 16-year old rising country artist is kicking off National Bullying Prevention Month by bringing her “NOBODY HAS THE POWER TO RUIN YOUR DAY”™ Bully Prevention Assembly Tour through the New York City area from October 6-15.  In addition, national media outlets Entertainment Tonight, OK! TV and CNN Impact Your World have taken notice of the impact that Lizzie is having on the younger generation of students.

Lizzie is set to perform on The Better Show on Friday, October 17, 2014, with additional interviews with Fox News Radio, Fox 411, NYC Profiles, and more.

The Bully Prevention Assembly Tour, which has already hit California,
Florida and Texas, includes visits with at least one school in each of
New York City’s five boroughs.  Lizzie has already met with more than
250 schools, connecting with more than 100,000 students.

During the assemblies, Lizzie encourages kids to help prevent
bullying, as she recounts her own personal journey as a young student
who was ridiculed and teased.  She will also perform her original song “Butterfly,”
which Lizzie co-wrote about her experience, and how she overcame the
teasing.  Her goal is to help kids as a positive role model, having
risen above her own ridicule, to pursue a career in music.

Lizzie just finished an EP of new material for release in 2015, produced by ACM award winner James Stroud, who has generated more than 130 career #1 hit singles.  Both “Butterfly” and Lizzie’s follow-up single, “I Love You That Much,” charted in the Top 40 on MusicRow. The video for “I Love You That Much” was directed by award-winning Steven Goldmann, whose past credits include Alan Jackson, Martina McBride and Shania Twain.

Lizzie has previously been featured on Access Hollywood, Billboard, Hallmark’s Home & Family, TIME for Kids, Nashville’s Crook & Chase and Emotional Mojo.  She was also named by the Country Music Association as an “Artist to Watch in 2013.”

“NOBODY HAS THE POWER TO RUIN YOUR DAY”™ New York City tour scheduled appearances are as follows with more to be added: