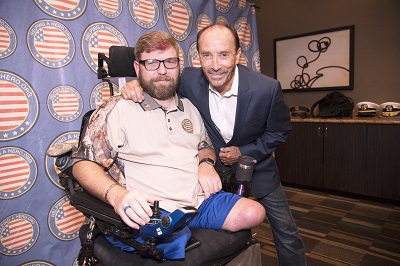 NASHVILLE, Tenn. – America’s patriot and Grammy®-winning artist, Lee Greenwood, has been honored with the Point of Light Award. Created
by the administration of President George H. W. Bush, the Daily Point
of Light Award honors individuals and groups creating meaningful change
in communities across America.

Greenwood, who was recently named one of Billboard’s 100 Greatest Country Artists of All Time,
has done over 30 tours with the USO and is an ambassador for non-profit
organization, Help A Hero. Despite his great musical success, Greenwood
says he is most proud of what he can give back to his country and those
who have served.

“I
count it a privilege to be in a position to brighten a veteran’s day or
help unite the country after a tragedy like 9-11 and I am honored to be
named as a Daily Point of Light by our beloved president, George H.W.
Bush,” said Greenwood. “Knowing that this award is the largest
organization dedicated to volunteer service, I consider this to be one
of my most prestigious honors.”

Greenwood was presented the Points of Light Award on August 21 by the Chairman of Helping a Hero, Chris Daniel. Points
of Light works in partnership with companies, foundations, government
agencies and nonprofits to achieve the greatest impact.

“Lee
inspires me and I still get goosebumps every time I hear him sing or
watch him present the keys to a specially adapted home to one of our
wounded warriors,” said Meredith Iler, Chairman Emeritus of Helping a
Hero. “It was an honor to nominate Lee for the Daily Point of Light
award and to surprise him with the Daily Point of Light Award alongside
dozens of wounded warriors who love and respect him.”

Throughout
his expansive career, international country music icon Lee Greenwood
has earned multiple CMA and ACM Awards, a Grammy Award for Top Male
Vocal Performance on “I.O.U,” in 1985, and a multitude of other
prestigious award nominations. His discography includes twenty-two
studio albums, seven compilation albums, seven No. 1 hits and
thirty-eight singles including songs like “It Turns Me Inside Out,”
“Ring On Her Finger Time on Her Hand,” “She’s Lyin,” “I don’t Mind the
Thorns if You’re the Rose,” “Dixie Road,” “Somebody’s Gonna Love You,”
“Going Going Gone,” “You Got A Good Love Comin,” among others. His
stand-out hit “God Bless the U.S.A.” has been in the top five on the
country singles charts three times (1991, 2001 and 2003), giving it the
distinction of being the only song in any genre of music to achieve that
feat. It was also No. 1 on the pop charts after 9/11. Known for his
stand-out patriotism and support of the U.S. Military, Greenwood has
been honored with the Congressional Medal of Honor Society’s National
Patriot’s Award, and entertained troops on more than 30 USO Tours. His
latest book release is a children’s book called “Proud To Be An
American,” which is currently available in stores, on Amazon and LeeGreenwood.com.

ABOUT HELPING A HERO:

Helping
a Hero is a 501(c)(3) non profit, non-partisan organization, founded in
2006, that provides support for military personnel severely injured in
the war on terror. Their principal activity is to provide specially
adapted homes for qualifying service members through partnerships made
with the builders, developers, communities, and the veteran. Helping a
Hero strives to engage the community in providing services and resources
for wounded heroes and their families. Additionally, Helping a Hero
provides additional support programs such as marriage retreats,
caregiver retreats, recreational activities, emotional support, and
financial support. Through the generosity of patriots across the
nation, Helping A Hero has awarded over 100 homes in 22 states since
2006. These adapted homes promote a successful transition from military
to civilian life and allow wounded veterans to regain some of their lost
independence.To learn more, or to donate, visit www.helpingahero.org.