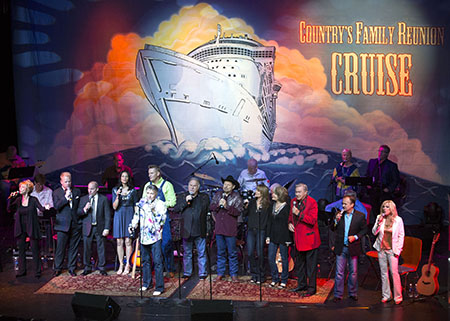 NASHVILLE,
Tenn. (August 2, 2015) – Stop imagining Nadine in a swimsuit – your
dreams can now become a reality. Join hit RFD-TV television series Larry’s Country Diner and Country’s Family Reunion as they set their clocks to island time from January 31 to February 7, 2016 and embark on the 2016 Country’s Family Reunion and Larry’s Country Diner Cruise.
The seven-night tropical escape will set sail from Port Canaveral, FL
and journey throughout the Western Caribbean about Royal Caribbean’s Freedom of the Seas
cruise liner. Sight-seeing and shopping stops include Haiti, Jamaica,
Grand Cayman Islands and Cozumel, Mexico, all in-between LIVE
performances from some of country, bluegrass and gospel music’s biggest
stars, comedy shows and more.

In just six short years, Larry’s Country Diner
has become one of classic country music enthusiasts’ most-adored
programs. One of the top-rated shows on the RFD-TV network, the
home-spun variety show delivers a family-sized helping of country music
performances by the stars of yesterday and today, with a side of hearty
laughter and good ole southern charm. Set in a small-town diner with
just eighteen tables that host the LIVE studio audience, the show’s
spontaneity and impromptu nature only add to its unique appeal, pulling
an estimated audience 1.4 million people each and every month to the network. During the cruise, fans will get to be a part of the “Larry’s Country Diner”
studio audience, get up close and personal with their favorite diner
cast members and enjoy stellar performance by iconic country artists. On
dry land, fans would have to wait over a year to get a seat at the
diner given the current waiting list!

ABOUT LARRY’S COUNTRY DINER:
Larry’s Country Diner
is a unique down-home variety show, which integrates entertainment
interviews and music in a weekly format, taped LIVE in front of a studio
audience in a country diner setting. The show features regular
characters including Black, Keith Bilbrey, Sheriff Jimmy Capps, waitress
Renae and avid church lady Nadine, along with special guest appearances
by country music artists of yesterday and today. Since its initial
airing on August 3, 2009, Larry’s Country Diner has produced over 100 episodes and has become one of the most popular shows on RFD-TV, garnering 1.5 million viewers monthly.