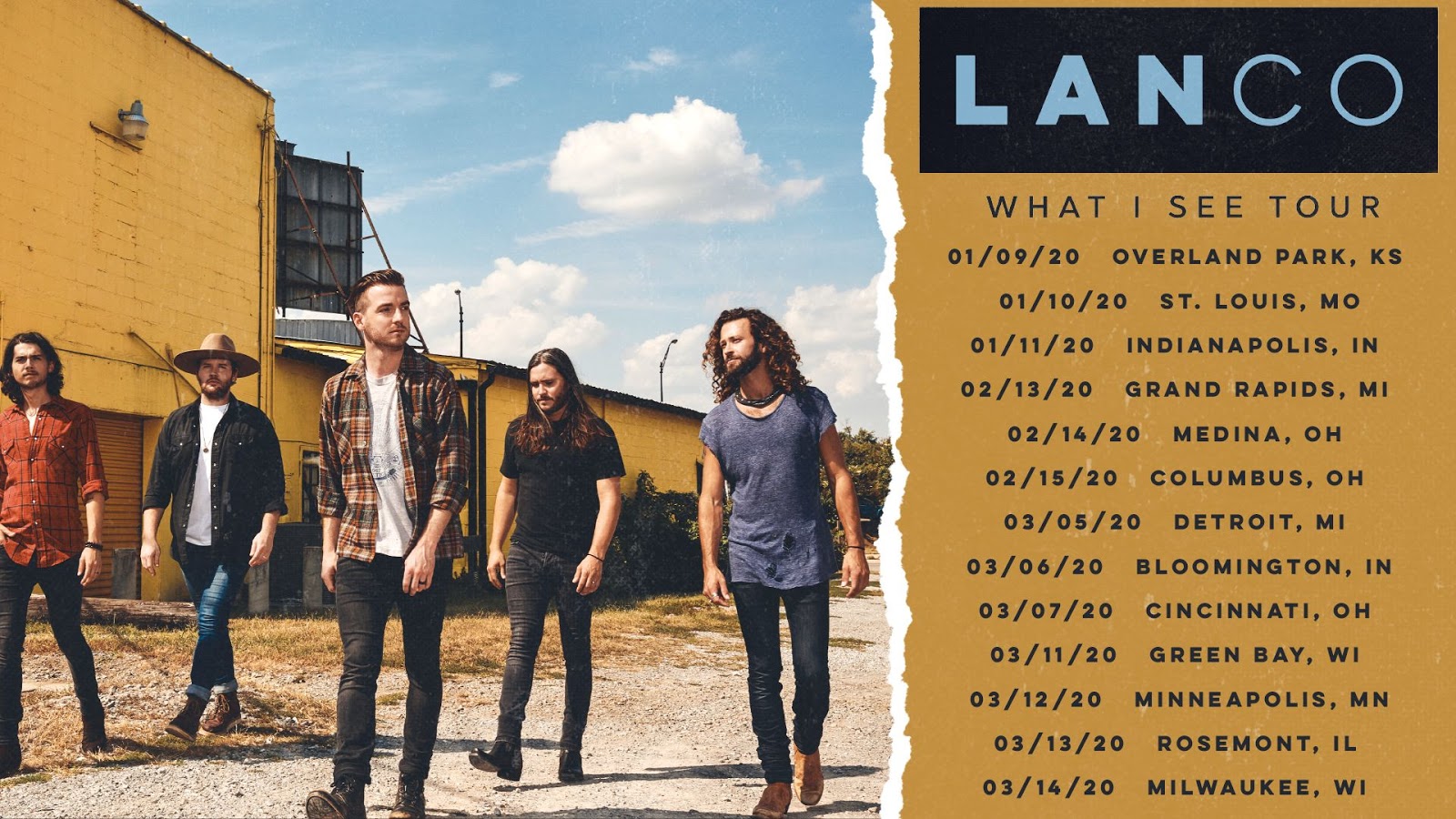 Multi-PLATINUM
group and Arista Nashville hit-makers LANCO has mapped out plans for
the new year as they announce details today behind their headlining WHAT I SEE TOUR launching Jan. 9 in
Overland Park, MS. Named after their newly released single, which
impacts Nov. 4, tickets for the first round of dates will be available
to the “FANCO” fan club on Wednesday (10/30), before tickets go on sale
to the public Friday (11/01) on LANCO’s official website.
The new dates propels LANCO’s road-warrior mentality after hosting
capacity crowds and playing over 100 shows this year including their
headlining run overseas and sets at prominent festivals including
Stagecoach. The WHAT I SEE TOUR kicks off ahead of LANCO hitting the
road with Miranda Lambert for her 2020 WILDCARD TOUR.

“The idea behind ‘What I See’ stemmed from being on tour in the middle
of nowhere in front of this little bar and it made us realize that every
town we cross has a piece of significance that resonates with people in
different ways,” said frontman Brandon Lancaster. “The picture that
this song paints replicates those towns we perform in every day and the
fans we get to see at each stop and experience those places with them.
This will be the first time we get to road-test new music so I’m ready
for 2020 to get here.”

WHAT I SEE TOUR Dates:

LANCO has paved their course with the success of the 2x PLATINUM single
“Greatest Love Story,” which became a multi-week radio chart-topper and
their GOLD certified hit “Born To Love You.” They recently surprised
fans by dropping two irresistible nostalgic tracks “What I See,” written
by frontman Brandon Lancaster, drummer Tripp Howell, bassist Chandler
Baldwin and Jeremy Spillman, and “Old Camaro” revealing another layer of
LANCO. The five-man band fuse together a modern twist on sentimental
and nostalgic hometown memories combined with a fresh mix of organic
sounds. Following the release of their No. One selling debut and
critically acclaimed album HALLELUJAH NIGHTS, which has over 560 million
streams, Lancaster became the first artist in 10 years to have a No.
One on the chart solely written by that artist, while LANCO served as
the first Country group in a decade to appear at the top of the
Billboard Country albums chart with a debut album. LANCO has garnered
multiple nominations from the CMT, CMA, ACM, AMA, and iHeartAwards, while Lancaster became the first member of a group to ever win NSAI’s “Songwriter/Artist of the Year.” For more information, visit www.lancomusic.com.