Lady Antebellum together on tour with Billy Currington, David Nail and Joe Nichols 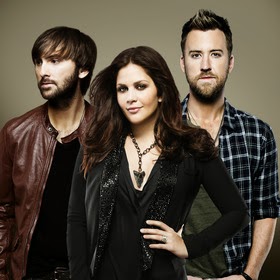 Nashville, TN – Jan. 17, 2014 – After returning to sold out arenas for
the opening of tour last weekend, seven-time GRAMMY award-winning trio
Lady Antebellum announced today that they will extend their North
American TAKE ME DOWNTOWN TOUR. The now nearly 80-city tour will begin
its summer leg on March 22 in Phoenix, AZ at Ak-Chin Pavilion. Fans can
continue to purchase tickets for previously announced tour dates at
www.ladyantebellum.com and to select cities of the summer leg as part of Live Nation’s Country Megaticket beginning Jan. 24 at
www.Megaticket.com.

“The energy from the crowds on opening weekend was like a drug…it was
totally intoxicating,” said Lady A’s Charles Kelley. “It felt so
unbelievable to be back on stage together, and each night was better
than the last.  We’re going on to North Dakota this weekend and from now
through the summer amphitheater shows, we’re going to try and raise the
bar night after night.”

Special guests Kip Moore and Kacey Musgraves are currently out with the
trio and will continue on to the first newly announced summer shows.
Lady A will also welcome a combination of Billy Currington, David Nail
and Joe Nichols for the remaining new tour dates.

The harmony-based trio has earned awards from the CMA’s, ACM’s and from
Billboard for their past headlining tour efforts. Since its 2006
inception, Lady A has also won the “Vocal Group of the Year” honor from
both the CMA and from the ACM’s three times in a row and sold over 11
million albums worldwide. The trio has taken seven trips to No. one on
the country radio charts, earned five Platinum singles including their
recent “Downtown” and has been awarded with seven GRAMMY awards
including the all-genre “Record of the Year” and “Song of the Year.”