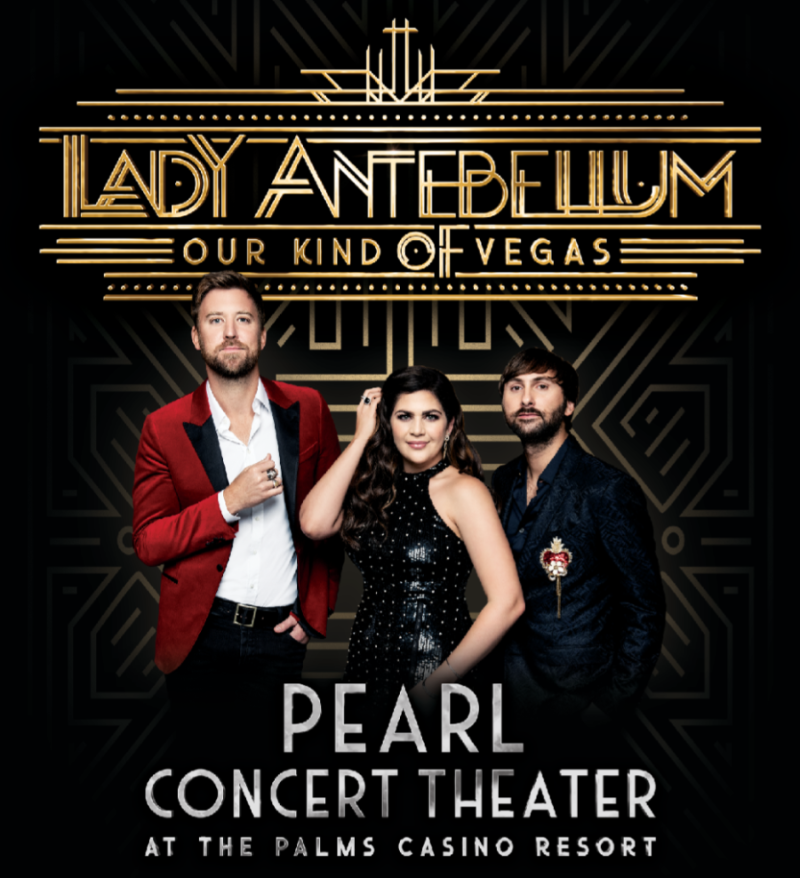 LADY ANTEBELLUM SETS THE STAGE FOR

OUR KIND OF VEGAS RESIDENCY AT PALMS CASINO RESORT IN 2019

15-Date Engagement in the Pearl Concert Theater Launches in

February 2019 with Tickets On Sale Next Week

with Nashville Family and Friends

NASHVILLE, TN – Oct. 24, 2018 – Current CMA “Vocal Group of the Year” nominee Lady Antebellum has announced their first-ever Las Vegas residency, OUR KIND OF VEGAS,
launching Feb. 8, 2019 at the Palms Casino Resort’s Pearl Concert
Theater. As the first Country act to headline the venue, the seven-time GRAMMY
award-winning trio will combine their chart-topping songs with
unparalleled production and multidimensional staging. Known for taking
their headlining run worldwide, Lady A will bring Nashville to Sin City
with stripped-down performances each night that will often feature the
songwriters behind the group’s fan-favorite hits. Live Nation is the
official promoter for the one-of-a-kind residency with tickets becoming
available to fan club members Monday, Oct. 29 before the public on sale
Friday, Nov. 2 at 10 a.m. PT through www.ticketmaster.com/LadyA.

“Las
Vegas has always been a special place for us both personally and as a
band,” said Hillary Scott. “I’ve celebrated my birthday in Vegas and we
won our first award ever as Lady A at the ACM Awa

rds.
So, we are looking forward to making it our second home, bringing along
some of our friends from Nashville and creating a show unlike we’ve
ever put together before.”

“We
are so excited to welcome Lady Antebellum to Palms in 2019,” said Jon
Gray, General Manager of Palms Casino Resort. “Our residencies represent
a diverse variety of musical genres and to feature such a respected
country group like Lady A is sure to be a huge hit with all their fans
around the world.”

Lady Antebellum tease the reveal of OUR KIND OF VEGAS residency with this video: https://youtu.be/dFf7WozDWt0

Last
night Lady A gathered family, friends and industry alike at Nashville’s
Sinema for a sneak peek of the OUR KIND OF VEGAS residency. As the
restaurant was embellished with casino tables, slots and signature
decorations, attendees took in a magician’s tricks and tarot readings
after the group gave an intimate celebratory toast.

Over
the course of their decade-long career, Lady Antebellum has amassed
record-breaking success ushering in more than 18 million album units and
34 million tracks sold, with over two billion digital streams. In
addition to critical acclaim the trio has nine No. One hits to their
name including the 9X PLATINUM hit “Need You Now” which is the highest
certified song by a Country group. Lady A has earned ACM and CMA “Vocal Group of the Year” trophies three years in a row and countless other honors including seven GRAMMY awards, Billboard Music Awards, People’s Choice Awards and Teen Choice Awards along with first-ever Tony Award nod
this year. The trio recently wrapped their co-headlining SUMMER PLAYS
ON TOUR after hosting capacity crowds at venues and amphitheaters across
the country. Lady Antebellum recently signed with BMLG records. For
more information, visit www.ladyantebellum.com.

The Pearl is Las Vegas’ premier concert theater boasting accommodations
for up to 2,500 ticket holders. The newly renovated venue features a
stage just four feet from the floor with the farthest seat a mere 120
feet back, offering the utmost in intimate concert viewing. Private and
semi-private skyboxes are located on each side of the venue offering
private bars, lounges, and restrooms. The Pearl is a marvel of modern
technology boasting top-of-the-line sound and video equipment
throughout. Hard wired to Studio at the Palms, The Pearl allows artists
to create a cost-effective live album with efficiency. For more
information, please visit www.palms.com.