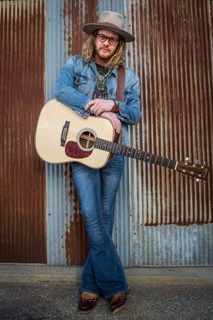 1. Please tell us about the songs on your album (influences, etc).

The
songs on my debut, self-titled EP are an inside look at my life over
the past few years. It is amazing what growth, as well as defeat in your
personal life, can do for you as an artist and songwriter. I have
really tried to intently focus on the song, because at the end of the
day that’s all that matters.

I
really wanted to bring these songs to life with an organic, live to
tape sound, like they did back in the day. I have been heavily
influenced by Gregg Allman for as long as I can remember. When I first
heard the intro to “Statesboro Blues” it changed the entire game for me.
From the snarling slide guitar tones, to the gravely vocals, I was
instantly hooked. Losing Gregg last year delivered a large blow to my
soul. I felt like one of my own family members had passed, as he has
been my hero since I was a teenager.

2. What kind of songs do you like to record the most?

I
am a very passionate and soulful person, so naturally I enjoy the
ballads more. I can emote more from deep within. As a guitarist, I love
to play riff oriented or signature lick sounding stuff, but you’ll have
to wait to see the live show to get any sort of guitar fireworks.

3. What is your favorite song among all the songs you have recorded and what’s the story behind it?

My
favorite song on the record is Hangover Town. I wrote the song with
Josh Mitcham (lead singer of Jericho Woods) in my kitchen one afternoon,
strictly from the title. I often hear people say things and jot down a
little note in my phone. I’m constantly taking notes to document life.
Some turn into songs and some serve as life lessons. This one happened
to become my favorite song, and a life lesson as well.  Life on the road
is hard.  When you’re living each night in a different city, it’s hard
to find real love, but the hangovers are easy to find.

4. What do you think about today’s music scene and where do you see it going in the future?

I
think today’s music scene is stronger than it has been in years. We are
seeing a rise in a lot of different types of artists, but more
specifically those who stand for something and aren’t just trying to
make money. These are genuine artists who pour their soul into their
craft, in hopes to simply move people. I feel like we are about to see a
shift in what is actually popular, due to the amount of up and coming
artists who are breaking the mold all over the world.

5. What inspired you to become an artist?

I
have played music as long as I can remember. Whether it was beating a
drum, trying to play keyboards, singing as a child in front of the whole
family without shame, it has always been a part of my life. My mama
says I was a “ham” when I was young. I guess I’ve always been drawn to
entertaining people, so it was a good fit. When I was in high school I
really caught the bug when I discovered some of the musical greats from
the 1960-70’s. Their persona was captivating, unlike anything I had ever
experienced. I immediately knew I wanted to be one of “those guys.”

6. What’s unique about you that will differentiate you from other artists?

I
don’t try to fit into any mold. I love music. Honest, gritty,
heartbreaking and uplifting music. In today’s music business, I feel
like artists often lose sight of their art because they’re too worried
about chasing that neon rainbow. With this record, I just let go. I let
the music speak for itself and I was just a catalyst to deliver it to
everyone. It was really nice to be able to step out of the way and just
play to the song on each track. As a “side guy” guitar player for many
years, I really learned a lot about the beauty of laying out and not
overplaying.

7. What has been your greatest challenge in the music business?

The
greatest challenge I have faced in the music business is stability.
Gigs come and go, jobs come and go and nothing is for certain. I know
that’s life and it’s like that in any business, but I truly feel like
the music business is much more volatile. Especially from a player
perspective. There are so many people fighting for the same position,
often times it’s hard to separate the good from the great.

8. What can your fans expect to see when they see you in concert?

They
can expect to see me pour my soul onto the stage, and leave it there. I
feel the music run through every inch of my being and I can’t help but
exude that soulful exchange with the crowd. I am hoping to get back to
the way things used to be, with real musicians, playing real instruments
and they happen to be REAL good.

9. What’s one song that you wish you could have recorded?

I
wish I could have recorded “Melissa” by the Allman Brothers Band. That
song is one of the most beautiful songs ever written, in my opinion. The
tones, the lyrics, the emotion; it’s all perfect to me. I was fortunate
to spend time with Gregg on his bus, a few years before he passed, and
he was absolutely everything I wanted him to be. Such a kind soul, and
he will forever be missed by so many friends and fans alike.

10. Fans are always hungry for good road stories. Do you have one you can share with us?

This
is always a tricky question! Haha. One of my favorite stories from the
road was back when my college band was touring around the Southeast. We
had this old Dodge 15-passenger van from the 1980’s and it was the
biggest piece of junk ever. One day, as we were headed home from a gig
in broad daylight, we came up to this 18-wheeler pulling luxury cars
right next to us. For whatever reason, the “Blue Goose” as we called it,
started shooting fireballs out of the exhaust, directly at the cars.
Somehow we managed to catch the median on fire and had to pull the van
over. We were scared to death, but laughing at the same time.  It was a
shame to see those expensive cars ruined by a total tank, but definitely
something to see. Somewhere, there is video footage of this, but I
highly doubt you’ll ever find it!