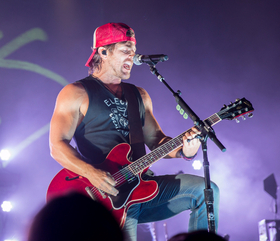 Kip Moore European Tour
Nashville,
TN – January 19, 2016 – Multi-PLATINUM singer/songwriter Kip Moore
announced today that he will be crossing the pond once more to play a
string of headlining dates in the UK and Ireland as part of the second
leg of his WILD ONES TOUR. Kicking off on 4/22 in Dublin, IE Moore’s
return to Europe follows a triumphant visit earlier last year where he
stunned crowds at the O2 Arena in London ending his set with a poignant
cover of native band Oasis’ “Don’t Look Back In Anger” with Rolling Stone revealing
that the “highlight arrived toward the end of the song, when he took
out his inner-ear monitors and led the 20,000-capacity through a
singalong of the final chorus.” Moore’s shows in Europe will come hot on
the heels of his first dates scheduled in Australia. For a full list of
tour dates and more information visit www.kipmoore.net.
“I
was blown away by the warmth and passion of the crowds when we played
Europe last year,” said Moore.  “It felt like we were playing for old
friends and I knew that I wanted to go back as soon as I could.  And
we’re taking it a bit further, well a whole lot further, when we go to
Australia for the first time.  This whole journey started for me by
getting out on the road and building fans one by one, so to be able to
bring our show to some new places this year is really exciting.”
WILD ONES TOUR INTERNATIONAL DATES
3/5      Thredbo, QLD AU – Snowy Mountains Country Music Festival
3/11    Ipswich, QLD AU – CMC Rocks Queensland
3/12    Ipswich, QLD AU – CMC Rocks Queensland
3/13    Ipswich, QLD AU – CMC Rocks Queensland
4/22    Dublin, IE – Whelan’s
4/23    Glasgow, UK – Oran Mor
4/25    Birmingham, UK – O2 Institute
4/26    Manchester, UK – Manchester Academy 3
4/27    London, UK – KOKO
Moore
extended his headlining WILD ONES TOUR into 2016 following fan demand
and will kick off dates in the US and Canada in Milwaukee, WI on 1/28,
with special guests The Cadillac Three and Chase Bryant joining on
select dates. Fans will be able to experience Moore’s critically
acclaimed album WILD ONES that VICE declares “sprinkles
a little late-night Bonnaroo magic…that’s made to be witnessed live.”
Moore’s new single “Running For You,” taken from his sophomore album
WILD ONES that Huffington Post declared as “one heck of an album… set to produce hit after hit after hit,” was hailed by Billboard as “a career song from the album” and continues to climb the charts.