KID ROCK AND FANS GIVE BACK IN BIG WAY 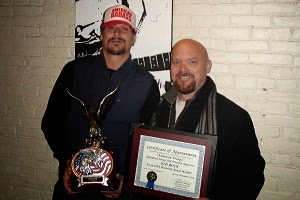 KID ROCK AND FANS GIVE BACK IN BIG WAY

OPERATION
TROOP AID TO BENEFIT FROM KID ROCK’S CHALLENGE; HARRIS JEWELRY PLEDGES
TO MATCH FANS’ DONATIONS UP TO $10,000 FROM NOW TO DEC. 15

Nashville,
Tenn. (December 9, 2014) – Kid Rock has some of the most devoted fans
in the music business. That is something the Detroit-based entertainer
is well aware of, as his fans are known for driving long distances to
catch his energetic live show. But, when he urges them to step forward
for a cause that is close to his heart, they rise to the challenge in
what could only be called an “American Bad Ass” way.

In announcing Kid Rock’s selection as the recipient of the Operation
Troop Aid “Patriot Award” a few weeks ago, OTA founder and executive
director Mark Woods stated that “Kid Rock is one of the most giving
entertainers I have ever met. He really gets it. Last year, Kid Rock
challenged his fans to help raise money to send care packages to the
troops. In one short month, we were able to ship over 500 care packages
just in time for the holidays. His art, legacy of family and Spirit of
Patriotism is exactly why this award exists.”

But, that was 2013. Kid Rock has decided that he would go the
distance for the veterans’ organization once again – and ask his loyal
following to come along for the ride.  A longtime supporter of Operation
Troop Aid, Harris Jewelry has pledged to match donations up to $10,000
donated by Kid Rock’s fan base from now through December 15th.  For
information on how to donate, simply visit www.KidRock.com/carepackage.

Fans can also leave messages for those men and women who are serving
our country overseas at that web address, as well. Packages will include
items such as toiletries, cookies, candies, headphones, Kid Rock CDs
and merchandise from Kid Rock, Made in Detroit, Badass American Lager,
Jim Beam, Warner Bros. Records, and FEA/Live Nation, who are partnering
up with the entertainer for the drive.

Operation Troop Aid was recently selected as the official military
charity for Veterans’ Day 2014 by The Wall Street Journal, which
profiled the organization on their website.

The Patriot Award is presented annually by Operation Troop Aid to
celebrities that champion the men and women serving in the American
Armed Forces. Kid Rock was awarded the Eagle Trophy for his countless
endeavors to support troops overseas and at local hospitals and for
supporting numerous military charities. Well known for his role as an
American Patriot, Kid Rock, has performed at various military bases and
continues to meet military personnel at every concert appearance. In
winning the award, the singer stands in some impressive company, with
previous winners including Hank Williams Jr., Toby Keith, Darryl Worley,
Aaron Tippin, Gary Sinise, Charlie Daniels, Mark Wills, and KISS.