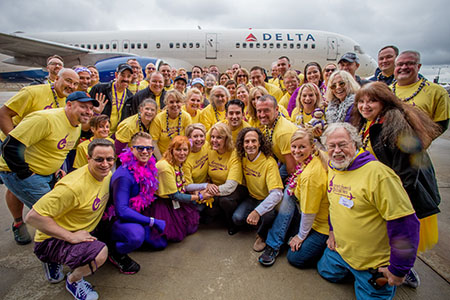 Annual Event Raised over $2.25 Million for Cancer Research
ATLANTA, Ga. (May 8, 2017)
– Fighting cancer became a mission for flight attendant Jane Mitchell
in 2015 when her daughter was diagnosed with brain cancer. On board a
flight last month, she shared her story with a celebrity customer:
saxophonist Kenny G, who serenaded passengers in her daughter’s honor in
a video that went viral.

Jane showed him photos of last year’s Delta Jet Drag, an annual
fundraiser for the American Cancer Society in which teams from across
the airline compete to pull a 167,000-pound jet 20 feet in the fastest
time.

“That looks pretty cool,” Kenny G commented. Jane suggested, “You
should come to Jet Drag,” to which Kenny G replied, “Maybe I will.”

To Jane’s surprise, he did. Last Friday in Atlanta, Kenny G suddenly
walked up behind Jane, sax in hand. She squealed and beamed. Kenny G
posed for photos, helped pull the plane on Jane’s Jet Drag team and
performed during the Relay for Life.

Kenny G’s arrival was one of numerous heartwarming moments as
thousands of Delta employees from all over the world descended on the
TechOps facility for Jet Drag and Relay For Life, Delta’s biggest
American Cancer Society fundraisers of the year.

The two were combined for the first time this year, making for the
biggest event yet in honor of Delta’s 15-year partnership with the
Society.

“Participating in Jet Drag was one of the highlights of my career,”
stated Kenny. “The look of surprise on Jane’s face meant so much to me
and knowing that we raised over $2.25 million for the American Cancer
Society is truly incredible.”

For Jane, the day was about honoring her daughter and defeating
cancer. Her team raised a whopping $120,000. “This is personal for me,”
she said. “I’m on a mission to raise as much as I can for research.
That’s a promise I made.”

In all, more than 100 employee teams tested their strength against
the Boeing 757. Each team raised at least $1,500, contributing to
Delta’s goal of raising $2.25 million to fund cancer research, patient
service programs and advocacy.

Meanwhile, participants on Relay teams took turns walking throughout
the whole eight-hour event in support of the ongoing battle cancer
patients’ face. Delta’s corporate Relay event is the largest relay in
the U.S.

As Kenny G played, attendees held candles in silent remembrance of
those who have lost the battle with cancer and in support of those still
fighting the battle.

About Kenny G
In
January 2015, Kenny G reached another career milestone with the release
of his fourteenth studio album Brazilian Nights via Concord Records.
The ten-song set, Kenny’s tribute to the ‘masters’ of Bossa Nova, is a
mixture of classics and Kenny G originals. Melodies and music have long
been a signature part of Kenny G’s life. Since releasing his self-titled
debut disc in the fall of 1982, Kenny G has become the biggest selling
instrumental musicians of the modern era and one of the best-selling
artists of all-time with global sales totaling more than 75 million
records. His biggest album was 1992’s Breathless – which sold a
staggering twelve million copies in the United States alone. In
addition, his 1994 Christmas disc Miracles: The Holiday Album ranks as
one of the most successful Yuletide albums ever – with sales over eight
million copies. Seven of his singles have hit the Top-40 on the
Billboard Hot 100. He has also been ranked as one of the most-played
artists in the Adult Contemporary format – with nine top ten singles.
Kenny G has collaborated with some of the biggest names in the business
during his legendary career, ranging from Michael Bolton to Katy Perry
to Weezer to Whitney Houston. Kenny G is about to embark on a U.S. tour with jazz great George Benson.