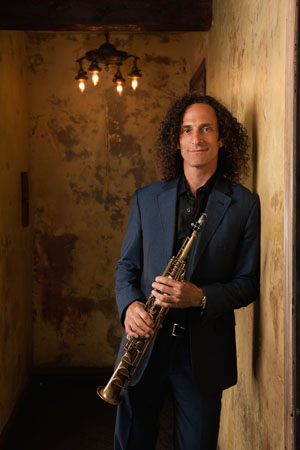 NASHVILLE, Tenn. (August 30, 2016) –
Kenny G has joined the growing list of celebrities, including Dwayne
“The Rock” Johnson, Chris Evans, Anna Faris, Chris Pratt and Kevin
Bacon, that have completed the #22PushUpChallenge to help bring
awareness to the issue of veteran suicide. The #22PushupChallenge was
started by the veteran empowerment group Honor Courage Commitment.
The group’s 22KILL movement works to build a community of support for
veterans and raise awareness for mental health challenges they face. The
ultimate goal of the project is to reach 22 million pushups, and the
group uses people’s tags to keep a live tally. At the end of his video,
Kenny challenges Michael Bolton, Richard Marx and Amy Alcott to show
their support by making videos of their own.

“Awareness, support and appreciation can help our veterans overcome
the challenges they too often face after leaving their uniform behind,”
said Kenny. “I encourage all of my fans to complete the challenge and
help bring attention to the issue of veteran suicide.”

About Kenny G:
In January 2015, Kenny G reached another career milestone with the release of his fourteenth studio album Brazilian Nights
via Concord Records. The ten-song set, Kenny’s tribute to the ‘masters’
of Bossa Nova, is a mixture of classics and Kenny G originals. Melodies
and music have long been a signature part of Kenny G’s life. Since
releasing his self-titled debut disc in the fall of 1982, Kenny G has
become the biggest selling instrumental musicians of the modern era and
one of the best-selling artists of all-time with global sales totaling
more than 75 million records. His biggest album was 1992’s Breathless – which sold a staggering twelve million copies in the United States alone. In addition, his 1994 Christmas disc Miracles: The Holiday Album
ranks as one of the most successful Yuletide albums ever – with sales
over eight million copies. Seven of his singles have hit the Top-40 on
the Billboard Hot 100. He has also been ranked as one of the
most-played artists in the Adult Contemporary format – with nine top ten
singles. Kenny G has collaborated with some of the biggest names in the
business during his legendary career, ranging from Michael Bolton to
Katy Perry to Weezer to Whitney Houston.