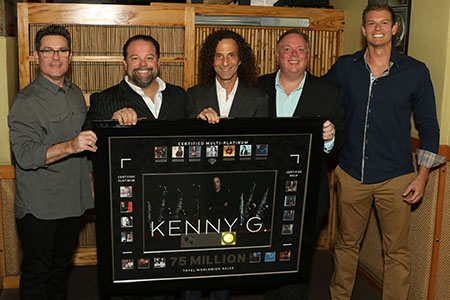 Looking towards an even bigger and brighter future and the next
chapter in a storied career, Kenny has partnered with Nashville
powerhouse CTK Management and one of the entertainment industry’s
premier talent and literary agencies, United Talent Agency.

“I feel honored to work with such a great musician who has achieved
the status of 75 million units sold worldwide. This an elite status and
he deserves all the recognition in the world,” Danny Nozell, CEO of CTK
Management.

Neil Warnock, Head of Music Worldwide at UTA said, “UTA are thrilled
to be in business with Kenny G. He is an absolute legend and we look
forward to being a significant part of his future.”

About Kenny G:
In January 2015, Kenny G reached another career milestone with the release of his fourteenth studio album Brazilian Nights
via Concord Records. The ten-song set, Kenny’s tribute to the ‘masters’
of Bossa Nova, is a mixture of classics and Kenny G originals. Melodies
and music have long been a signature part of Kenny G’s life. Since
releasing his self-titled debut disc in the fall of 1982, Kenny G has
become the biggest selling instrumental musicians of the modern era and
one of the best-selling artists of all-time with global sales totaling
more than 75 million records. His biggest album was 1992’s Breathless – which sold a staggering twelve million copies in the United States alone. In addition, his 1994 Christmas disc Miracles: The Holiday Album
ranks as one of the most successful Yuletide albums ever – with sales
over eight million copies. Seven of his singles have hit the Top-40 on
the Billboard Hot 100. He has also been ranked as one of the
most-played artists in the Adult Contemporary format – with nine top ten
singles. Kenny G has collaborated with some of the biggest names in the
business during his legendary career, ranging from Michael Bolton to
Katy Perry to Weezer to Whitney Houston.