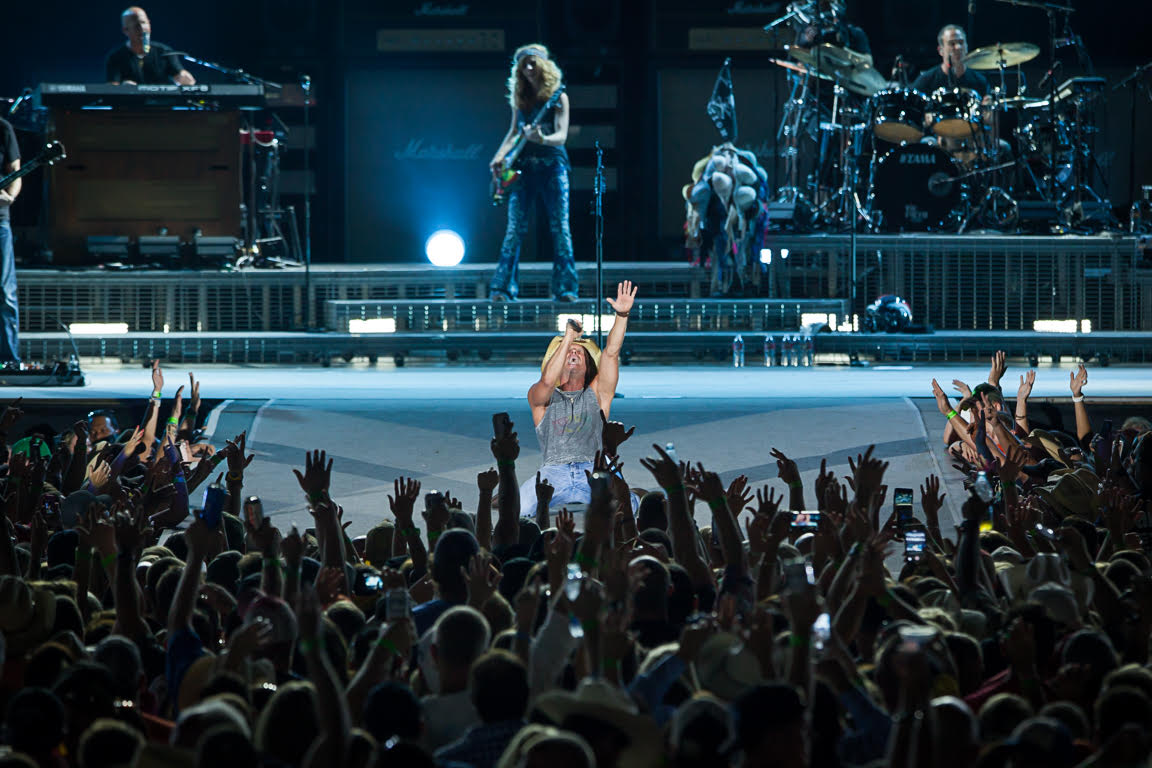 Denver,
CO (August 9, 2015): Kenny Chesney grew up watching the Denver
Broncos playing on TV, so playing Sports Authority Stadium at Mile High
was one of the shows he was looking forward to. Evidently, Denver shared
that anticipation as Chesney’s Big Revival 2015 Tour stop sold 54,674 – the most ever for an end zone set-up show at the iconic football stadium.

“Since I started
coming here to play the Grizzly Rose, the Denver fans have been a big
part of taking my music where it’s gone… and they sure did tonight!”
Chesney said after the show. “We have had some incredible shows in
Denver, including those crazy nights at Red Rocks, which I didn’t think
anything could top. This just did.”

To gear up for
the Mile High show, Chesney spent the morning at practice with the
Broncos. Wearing a Tennessee t-shirt in solidarity with his good friend
Peyton Manning, who was at practice, Chesney took in the drills and got
focused up for his sold-out show.

Football was the
day’s underlying theme. Earlier that evening, Chesney was invoked during
legendary general manager Ron Wolf’s speech during his induction into
the Football Hall of Fame. The man who spent 22 seasons with the Raiders
before transforming the Green Bay Packers, opened his
comments with “I’d like to start by quoting my good friend Kenny
Chesney, ‘This is our moment, This is our time/ This is our destiny,
This is our night to shine…”

“My friends in the
NFL were blowing my phone up with texts when Ron did that,” Chesney
marveled. “Ron Wolf meant so much to football, he changed the game, but
he also believed in the passion and the work it takes to make a team
great. Those same ideas are what I brought with me to Nashville when I
was a kid; the idea it transfers… what do you say?”

Naturally
Chesney’s celebration of high school “The Boys of Fall” took on even
deeper tones during the otherwise high-energy set. Pulling a girl in her
mid-teens from the crowd, Chesney gave the petite brunette in a red
plaid shirt a hug and then set the signed Broncos helmet on her head.
The crowd erupted as loud as they’d done for “American Kids,” “Out Last
Night” or “Summertime.”

“I like the idea
of giving a girl the helmet,” Chesney says. “Like ‘Wild Child,’ it says
women really can do anything. It’s important people know and think that. When you see this, I think it resets the way we look at the world! Dream and be what you want. Just look at me…”