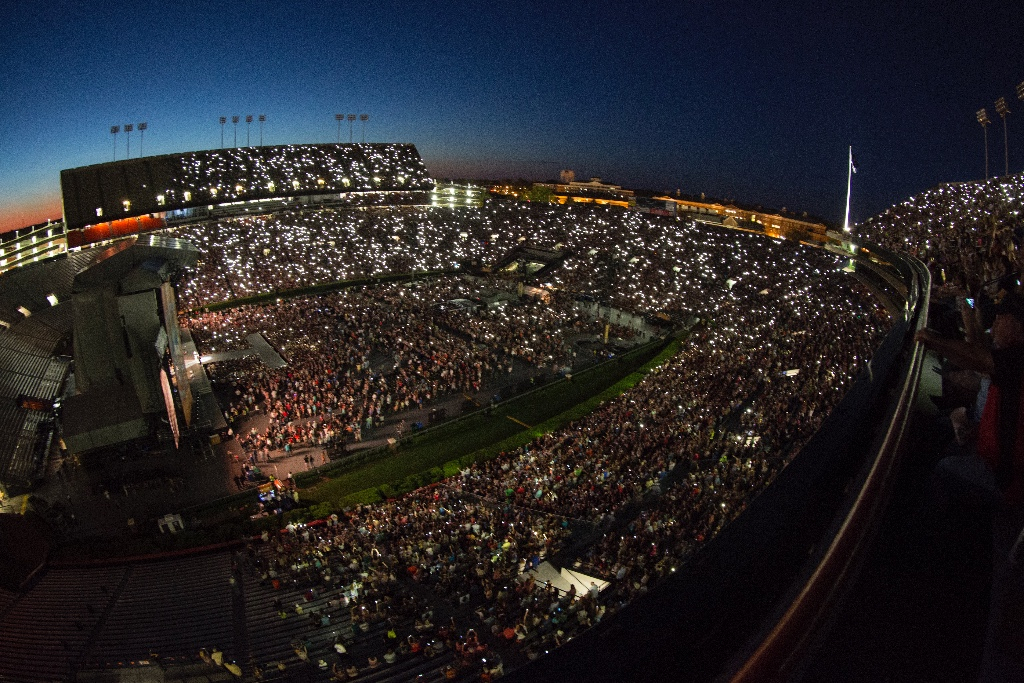 Auburn, Ala.:  They hoisted the flag of the No Shoes Nation
Monday. Friday afternoon, there was tell of a few songs played at the
Lambda Chi house. By 8:50 Saturday night, the War Eagles were beyond
ready for Kenny Chesney, who kicked off his 2016 Spread The Love Tour as the first ever concert in the 75-year history of Jordan-Hare Stadium, with two full hours.

With guitars blazing, a bumper crop of hits and guest
appearances from tour mates Miranda Lambert (“You and Tequila”), Sam
Hunt (“Come Over”) and Old Dominion (“Save It For A Rainy Day”), the
8-time Entertainer of the Year ran, laughed, and sang songs from a
career that includes 28 No. 1s. The two dozen songs ignited the crowd,
who sang along throughout, often taking an a cappella chorus on songs
like “Anything But Mine” and “American Kids.”

“Sometimes you can feel the energy long before you hit the
stage,” Chesney explained after the show. “It’s gathering, and you can
sense it. This was one of those shows, one of those times. It was so
intense, it was so there, this is the reason we do this: to play music and feel all that energy coming at us.”

The show – billed as the Music & Miracles Festival – was
created to honor the last wish of Kevin Brown, who succumbed to cancer.
Telling the crowd, “Before I came onstage, I got to meet so many great
people… This show is because of Kevin: his dream specifically was to
see us play in this stadium. And so, War Eagle…,” the audience began
what became a two-minute chant of “War! War! War! Eagle!”

With only a piano, Chesney delivered a particularly
heartfelt “My Home’s in Alabama” to honor the sentiment behind the
event. But for much of the night, it was high impact and higher energy.
Even a five-song lapse in his voice – remedied by Throat Coat Tea–
didn’t slow down the man deemed “The King of the Road” by The Wall Street Journal.
As the audience pumped their fists to “Noise,” his propulsive new
single, the notion of being together and celebrating the night seemed to
be the only thing on everyone’s mind.

Miranda Lambert, in a black leather mini skirt, offered a
sultry take on Hank Williams’ “Move it on Over.” Then the 7-time CMA
Female Vocalist scalded the crowd with a potent “Gunpowder and Lead.”
American Music Awards Favorite New Country Artist Sam Hunt took momentum
and rode the energy of his set for a performance that included diving
off the stage and working his way through the crowd to the other end
zone. ACM Best New Group Old Dominion opened the day with a set that
included their two-week No. 1 “Break Up With Him.”

“Some years you just know from night one, it’s going to be special. When we named it Spread The Love,
we got it right. To be able to hear the kind of music and the crowd I
did all afternoon, it really gets me fired up to get on that stage and
make some music. We started back in February with everything pointed at
tonight. From the first second we heard that crowd, all the work was
beyond worth it! Miranda, Sam, Old Dominion and every single person totally rocked our world. This is what memories are made of.”

As “Noise” blazes into the Top 10, the 2016 Spread the Love Tour
starts on a high note. With dates at Albuquerque, New Mexico’s Isleta
Amphitheater on May 5 and Phoenix, Arizona’s Chase Field on May 7,
summer is now officially underway.