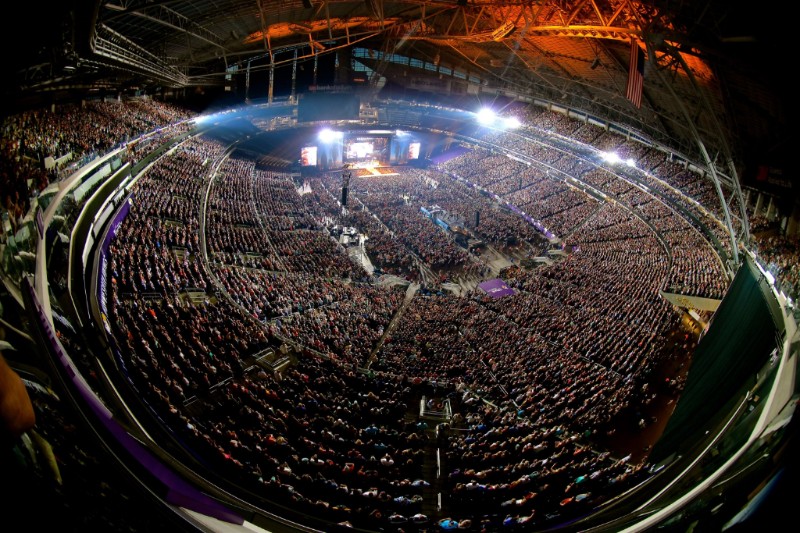 MINNEAPOLIS, Minn. — With The Star Tribune’s Jon Bream tagging him “the high-energy country music stadium king” before Kenny Chesney
even got to Minneapolis, it was destined to be one heck of a night at
the U.S. Bank Stadium. Not enough that it was Derby Day, Cinco de Mayo ­and the
very first inklings of spring, the East Tennessee songwriter/superstar
hit the stage with a case of hits including the celebratory “Beer In
Mexico,” “Out Last Night,” “Big Star” and “When the Sun Goes Down.”

Clearly thrilling the 48,255 fans in the sold out stadium, the emphasis
was on good feelings and making a night to remember. Without missing a
beat, the 8-time Entertainer of the Year blazed through eight songs
before ever truly talking to the audience.

“Minneapolis always comes to have the best time, and they never
fail,” Chesney enthused. “And this year, it was a whole other level.
Whether it was how loud they sang ‘Anything But Mine’ back to us, or
just the volume of the cheering for David Lee Murphy when he came out to
sing ‘Everything’s Gonna Be Alright’ with us, it was an incredible
amount of energy, joy, intensity coming at the stage.”

Always one to plug into the local vibe, Chesney’s bassist Harmoni Kelly
wore a Prince t-shirt to honor the iconic soul/funk legend for the show.
But drawing even greater approval from the No Shoes Nation was the
appearance of Vikings’ head coach Mike Zimmer during “She Thinks My
Tractor’s Sexy” to lead the capacity crowd in the team’s signature SKOL
Chant.

“Everyone knows how much I love football,” Chesney explained, “and being
in the home of the Vikings felt special. Deciding to come to
Minneapolis so much earlier – as we try to change the routing up – was a
little bit unnerving, but when Mike walked backstage with that smile
and offered to lead the SKOL Chant, everything about going earlier and
playing the football stadium felt like this is exactly where we’re meant
to be.”

As “Get Along,” the first music from Chesney’s new Blue Chair/Warner
Nashville alliance, swoops up the chart, the response to the first three
weekends of the Trip Around The Sun Tour 2018 has
broken records in all three stadiums the tour has played. At a time when
it might seem a little early for his kind of summer revelry, the No
Shoes Nation shows – once again – they’re strong, proud and ready to get
out there and live inside the songs.

“Listening to the crowds every single night,” Chesney marveled, “it
really does feel like they missed me almost as much as I missed them. I
think sometimes people don’t realize it’s a sacrifice for me to not
tour… because I really do thrive out there. But I’ve learned that if I
don’t take time for the music, my head doesn’t have the room to really
write or find songs like ‘Noise,’ ‘American Kids,’ ‘Trip Around The Sun’
or ‘Get Along’ – and that’s part of it.”