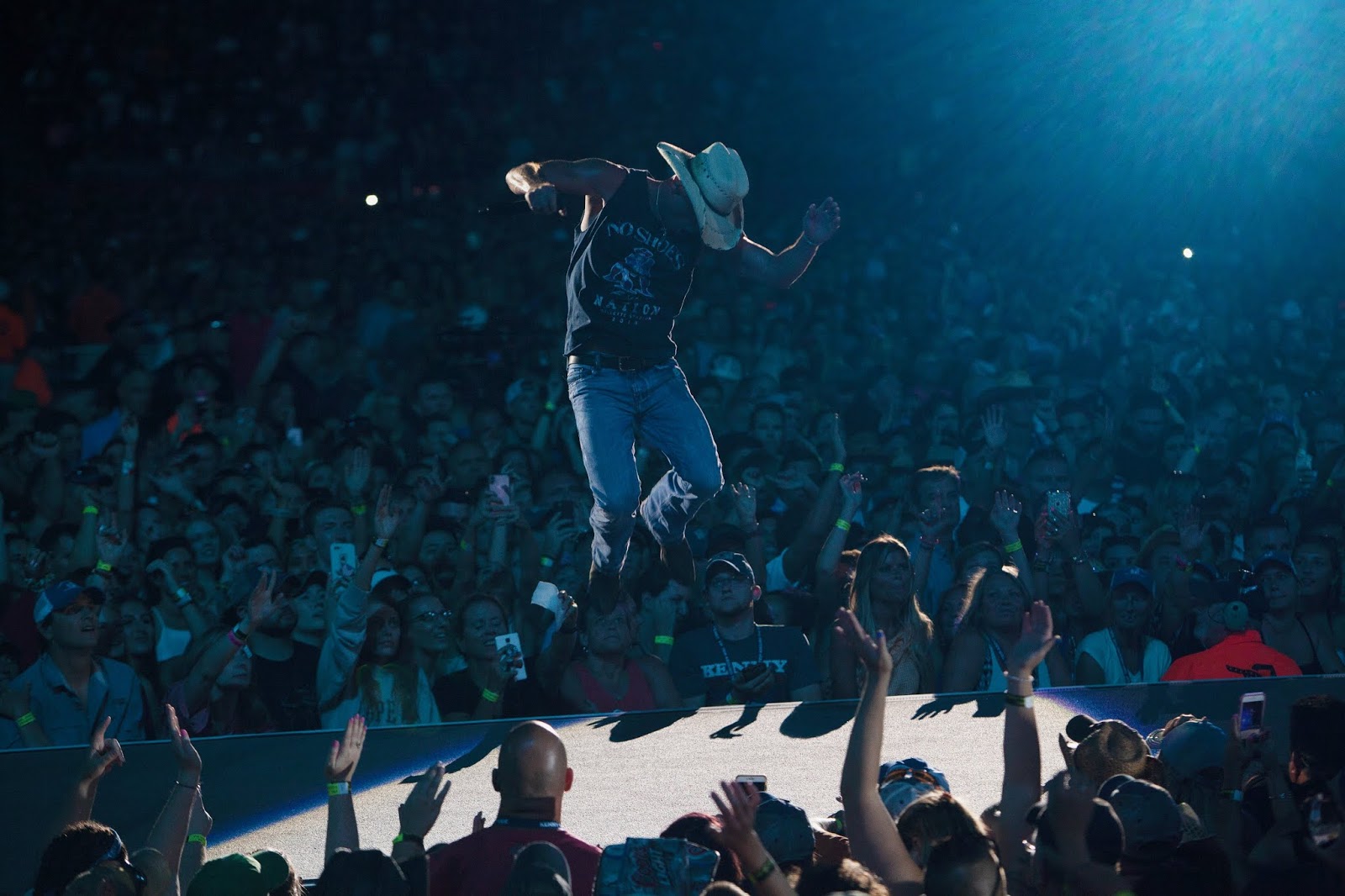 With an opening video welcome from the New England Patriots organization that included Robert and
Jonathan Kraft, head coach Bill Belichick, quarterback Tom Brady, tight
end Rob Gronkowski, wide receiver Cordarelle Patterson, offensive
linemen Marcus Cannon and David Andrews, plus Patriots Broadcast Analyst
Scott Zolak and members of the Massachusetts State Police Mounted
United, the greater Boston area was all in for Kenny Chesney’s 18th and 19th shows
at Gillette Stadium. With two night attendance of 121,714 – as
Chesney’s team worked to make more tickets available this morning – the
8-time Entertainer of the Year not only broke his own attendance record,
but he surpassed the million ticket mark by over 90,000.

“This is so much bigger than all of us,” Chesney told Saturday night’s crowd. “It’s like destiny.”

Certainly the man Variety called “Country music’s only true long-term stadium act” and The Wall Street Journal deemed
“The New England Patriots’ Other Star” hit the stage both nights intent
on rocking the packed stadium with everything he had. By the time
guitarist Kenny Greenberg swooped in to a vamp on Bachman Turner
Overdrive’s “Taking Care of Business” in the show opening “Beer In
Mexico,” the East Tennessee songwriter/superstar was covered in sweat
from racing from one side of the 40 foot strut to the other. Throwing
himself at the music, the audience cheered – often for 40, 60, 90
seconds between songs – and sang the songs back with a fervor that
pushed the energy even higher.

“This
entire summer has been a new threshold in terms of how No Shoes Nation
has come at these songs, these shows, these moments,” reflected the man
who just notched his 30th No. 1 Billboard Country single. “Just when we thought it couldn’t get any better,
something else would happen… And then we saw a whole new response,
whether it was the cheers, the way the audiences sang or the looks on
people’s faces. It was incredible.”

Invoking Robert Kraft’s philosophy that sports, music and traditions bring people together, the only country artist on Pollstar’s
Mid-Year Top 10 Tours thanked the assembled audience for allowing him
to become one of their traditions. Sharing the love of sports and music,
Chesney closed both nights with “The Boys of Fall,” his ode to the
honor code of high school football players everywhere.

He
also played “(She Comes from) Boston” both nights. Saturday, he brought
millionth ticket purchaser Karen Duggan on stage, explaining that she
represented each and every one of them before performing the song about
the island dwelling expat to the capacity crowd.

“The
spirit of the people of Boston have been part of this journey since the
first year we started playing stadiums. They love life, they work hard,
they believe in music – and they understand how much I see their lives
in my own life. I’d’ve never believed when I was young that I would
play, let alone sell out the stadium where the Patriots play. But when I
hear those voices as I hit that stage, I’m sure glad unthinkable dreams
come true.”

Over a dozen years, Chesney rocked 1,090,326 people across 19 shows in Boston. Chesney also had
another platinum summer. With just under 1.3 million total attendance,
he racked up 1,298,088 tickets sold across 19 stadiums and 41 total
shows on his Trip Around the Sun Tour.