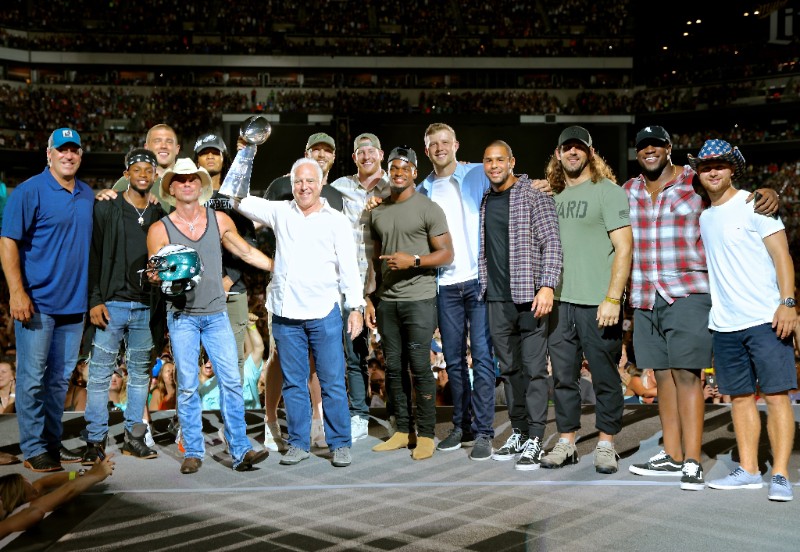 KENNY CHESNEY BREAKS HIS OWN PHILLY RECORD WITH 55,238

KENNY CHESNEY BREAKS HIS OWN PHILLY RECORD WITH 55,238

Philadelphia, Pa. – Kenny Chesney
stopped cold onstage at Lincoln Financial Field as he was winding up
his three week  No. 1 “American Kids,” overpowered by the crowd’s
cheers. When 30 seconds passed, he leaned into the mic and told the
crowd, “THIS is why we can’t wait to… get to… Philadelphia every
summer.” The crowd’s cheers grew louder, until the record-breaking sold
out crowd of 55,238 sang an a cappella chorus of the freewheeling
celebration of youth back to the songwriter/superstar from East
Tennessee.

As special as that moment was, it was only one in a series that marked
the eight-time Country Music Association and Academy of Country Music
Entertainer of the Year’s ninth trip to the home of the Philadelphia
Eagles. David Lee Murphy was met with roars, as he emerged from the
wings to join Chesney for their Top 5 and climbing duet “Everything’s
Gonna Be Alright,” with footage from Love for Love City’s work in the
Virgin Islands playing behind them.

Also on hand was a contingent from the St. John School for the Arts,
who’ve been a recipient of Love for Love City’s efforts. Several
students, teachers and their parents were recognized from the stage,
connecting the dots for Chesney’s humanitarian efforts for the little
island school where music is such a priority.

“It’s so important that the people of St. John understand how loved they
are by the people of the No Shoes Nation,” Chesney explained after the
show. “They love life and music in a way that brings all this together,
and being here, they can see how many people are working to help return
their island to what it was.” 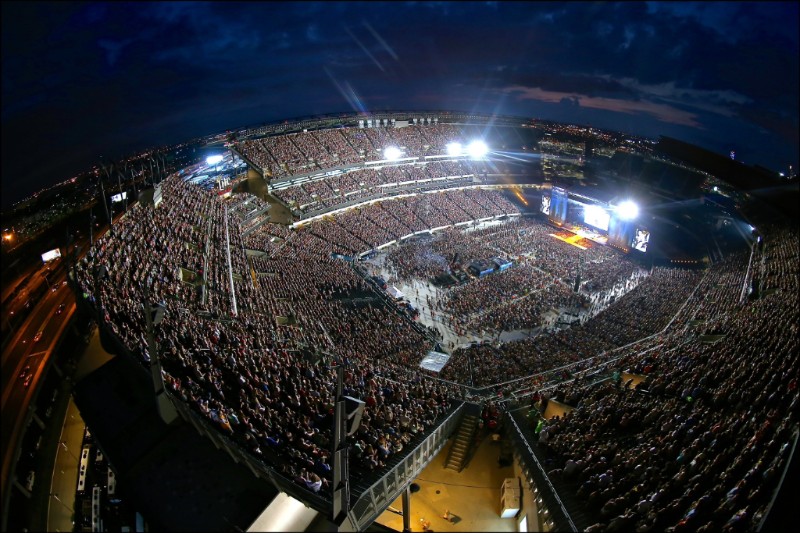 As emotional as those moments were, nothing could have prepared the
crowd for the news that “Boys of Fall” was going to make its Trip Around The Sun Tour debut.
Explaining to the audience, “I wanted to play it for the first time
this summer in the home of the Super Bowl Champions,” the stately
introduction unspooled  to the song
that honors the power of football to bring young men together. The
audience raised their arms and voices, swaying side to side and waving
lighters to honor their championship team.

But as the third verse climaxed, Chesney turned to the wings as fourteen
members of the Eagles’ organization – including head coach Doug
Pederson and quarterback Carson Wentz — streamed downstage with
t-shirts, memorabilia and owner Jeffrey Lurie holding the Vince Lombardi
Trophy. The Eagles had already given the Love for Love City Foundation a
check for $25,000 earlier in the afternoon.

“There are no words for how the people of Philadelphia, the Eagles
organization and everyone at the Linc make us feel,” Chesney began,
following the set. “The audiences have always been right there with us,
all heart and soul and believing in what sports and music can do. But
having so many guys from the team turn out, the generous gift for the
Love for Love City Fund, the cheers from the fans, that blows me away…”