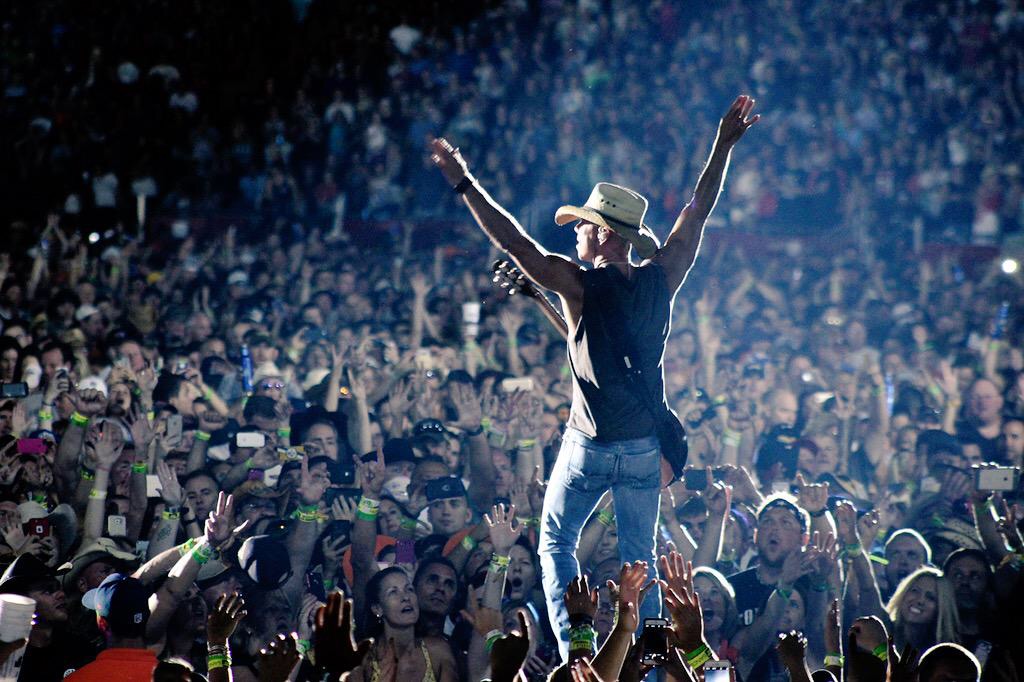 With 60,082 fans Friday and 60,124 fans Saturday, Kenny Chesney played
to 120,206 fans this weekend. Without final tallies, it was already
determined that in nine trips to Foxborough, Chesney played to over
three-quarters of a million fans. With a tent show revivalist’s fervor,
the man The Wall Street Journal called “The King of the Road” never slowed over 2 1/2 hours each night – prompting The Boston Globe headline: “Crowd belongs to Chesney at Gillette.”

“Some nights you just know you’re going new places up there,” Chesney
said after the show. “I could hear the fans long before the swing was
above the platform – and flying over all those heads, seeing the faces, I
could tell Boston had been waiting for these shows almost as much me
and the band had! The No Shoes Nation are some of the fiercest, most
passionate music lovers – and there is nothing like the way they come at
these songs.”

Wearing a Grace Potter & the Nocturnals t-shirt the first night as
the crowd almost drowned him out on “American Kids,” Chesney embodied
the euphoria of truly being alive and in the moment. He brought Matthew
Ramsey and Brad Tursi from stadium opener Old Dominion out for “Save It
For A Rainy Day,” which they co-wrote; then introduced David Lee Murphy
as “the original Hillbilly Rock Star” for “Dust On The Bottle” and
“Party Crowd.”

“And just when you think it can’t get any better, the last night of the
tour hit,” Chesney continued. “The audience was even louder, live-er and
sang every single word back to us! You can’t begin to imagine something
like that, and knowing we’re putting the tents up for another year,
we’ll hear their cheers until it’s time to start it up again for next
year.”

Performing “She Came From Boston” for a second straight night, Chesney
then had songwriter/vocalist Gretchen Rhodes join him to share the
highly emotional “Happy On The Hey Now,” written as a memorial for one
of the original pack of island girls he befriended long before
superstardom hit. Tourmate Cole Swindell appeared in a t-shirt from
Chesney’s alma mater East Tennessee State University and Robert and John
Kraft brought the Patriots’ four Super Bowl trophies onstage during an
especially poignant “Boys of Fall.”

“We moved the stage all the way back,” Chesney said of the landmark
nights. “The only way we’re gonna get more people in is to add another
night, and that would be crazy. But man, when you hear those folks
singing back to you… see all those arms sweeping from side to side… We
could be up there all night! Just the way that energy hits you, there’s
nothing like it.”

Bringing co-headliner Jason Aldean out for the encore, Chesney wore
baggy No Shoes Nation basketball shorts and no shoes. Having set or
broken records in Minneapolis’ Target Stadium, Philadelphia’s Lincoln
Financial Field, Kansas City’s Arrowhead Stadium, East Rutherford, NJ’s
Met Life Stadium, Pittsburgh’s Heinz Field, Green Bay’s Lambeau Field,
as well as putting 55,000 in the Rose Bowl, he brought all that
collected energy to his final concerts of the Big Revival 2015 – showing
the world why he is the only country artist on Billboard’s Top 10 Touring Acts of the Last 25 Years.