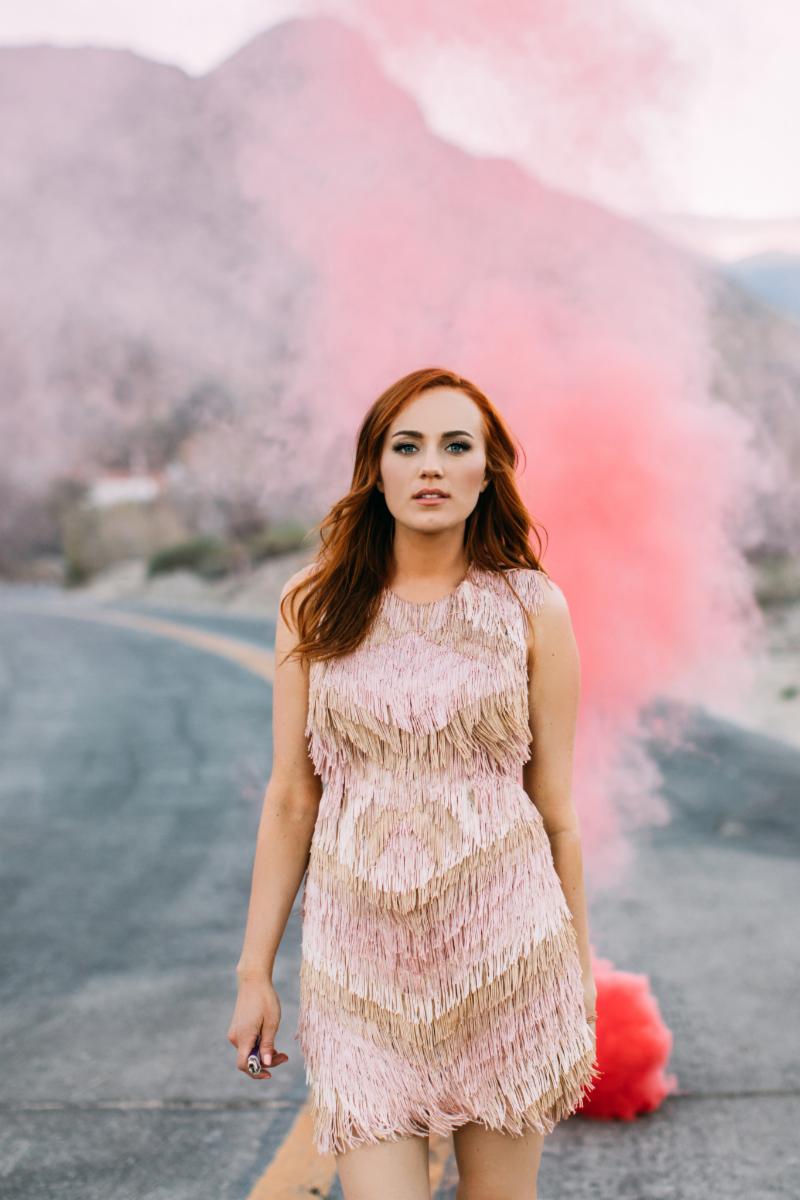 Answer: I would describe myself as
silly, empathetic, creative, detailed, everybody’s best friend, and my
music as storytelling driven with percussive instrumentation and pop
hooks. This first record is centered around letting go of what no longer
serves you, embracing vulnerability, acknowledging your self-worth, and
never settling for less than the love and respect you deserve.

Answer:
This last year has been crazy, magical, creative, empowering,
exhausting, fulfilling, challenging, and everything in between. Getting
up on stage and connecting with an audience in person is always a
highlight. That energy is something I wish I could bottle up. But
really, releasing my music for the first time out into the world and
growing my fan base is definitely a major highlight, despite the hard
work, ups, and downs along the way.

Answer:
I do! I consider myself a songwriter first and foremost. Outside of the
one All-American Rejects cover I’ve released, I’ve written every song
myself and have even begun writing for other artists as well (play Video Games by
Teddi Gold). That said, I’ve recently begun getting pitched songs by
other songwriters. If something really resonates that was written by
someone else, I’m happy to consider it, but for now, the plan is to
remain involved in the writing. I mean, my favorite part about all of
this is the writing. Secretly singing into my voice memos to capture an
idea or staying up until 3 writing a song while the rest of the world
sleeps. Just you and whatever it is you want to say.

Answer: I believe that Let Me Go is
special because not only does it feature solid production, passionate
vocals, rad percussion, and epic harmonies/vocal layering, but it also
touches upon a subject that I think is often swept under the rug in
favor of traditional romance songs. I
tend to write about direct personal experiences, but this track was
actually inspired by a friend whose parents were not accepting of who he
is and were resisting allowing him to grow into the person he wanted to
be. The song addresses codependency and our innate desire on the
one hand for everyone we love to think the way we do and on the other
side our desire for approval. It goes out to anyone who feels the
need to break free of a habit, pattern, or person holding them back,
anyone in need of a little self-love—flaws and all, and anyone who feels
the pull to forge their own path despite adversity. You are allowed to
believe what you believe (or not believe what you don’t), to love who
you love, to pursue whatever dream it is you want to pursue, and to,
most of all, not feel sorry about it.

Answer:
I control everything. That sounds so dictatorial, but it’s true. I’m
overseeing everything at the moment from the songwriting to my design,
my photoshoots, my outfits, promo videos, marketing plans, live shows,
e-mail blasts, etc. That said, some of what I do is a collaboration with
other creative minds and so you give or take a little. I may fight for a
certain idea but then concede on something else if I’ve been convinced
otherwise. I realize I don’t know everything and I’m thrilled when
someone else brings their gifts to the table.

Answer:
I think today’s music industry is simultaneously incredibly challenging
and very exciting. There is so much possibility. People are discovering
music in many different ways on so many different platforms. Because of
that, it can be tough to consolidate…I mean, my fans are spread out
across various listening platforms, social sites, e-mail lists, etc. The
amount of noise is louder than ever and artists are essentially
required to do everything themselves and wear several hats, which
sometimes can be a lot and unfortunately leaves less time for the music
creation itself. But on the flip side, the potential to envision a path
and build a career on your own terms is also unlike ever before. And
because I am so involved in the business side of everything and am
building my music up myself, I’ve learned so much and can hold my own in
a meeting, don’t desperately need the other party in order to
have a career, can read a contract, ask for what I want, and will
hopefully not be so easily taken advantage of. Artists have always been
taken advantage of for having a dream that others can exploit and I
think we’re empowering ourselves more than ever.

Answer:
Looking back on those whom I would consider “icons,” I believe the
common thread is that they had a vision larger than the music itself. Of
course, it’s the music, but it’s also the message, the feel, the
experience, the videos, the live show…the way the entire package
brings you into their world and how it makes you feel. I think
that’s when the connection is deeper than just enjoying a song or a
record on its own. It’s also the consistency. To be able to do the above
over and over again, adapting and growing in one’s artistry, while also
remaining true to who you are and your vision. What do I know, but
that’s what I would imagine.

Answer:
Expect an experience – a lot of storytelling, surprises, sing-a-longs,
and a little bit of therapy. I like to connect and talk to you all in
the middle of the show so hopefully it feels like I’m just in your
living room sharing my stories or something.

Lamitschka:  Tell us about the fan club and how people can join it.

Answer:
Well, on a recent celebratory live stream, my fans decided to call
themselves Karakeets, which is very fun and exciting. As of now, the fan
club is just my e-mail list which essentially provides you updates and
exclusives, but I plan to expand it into something larger like a group
for the Karakeets (the aviary? lol) with special meet-n-greets, merch,
and perks! Join my e-mail list below for updates on my music and the fan
club:

Answer:
Oh man! My fans are really really kind and supportive across the board.
One comes to mind from this past week. An amazing fan from South Africa
messaged me and said that he admired my hustle, skill, talent, and
grace, but most of all that I’m comfortable enough to let followers into
my life behind the music; that I have such a genuine soul and that he
feels he knows me personally because of the above. And that my voice is
warm and reminds him of better days as a child growing up. That whole
conversation just blew my mind and really gave me a positive lift at a
moment when I needed it most. Recently, several fans have been messaging
me that they found me because of a love for my music, but have been
very happy to discover that I’m also an incredible human being…that
may be the best compliment you can receive of all as a human in any
discipline. I’m lucky.