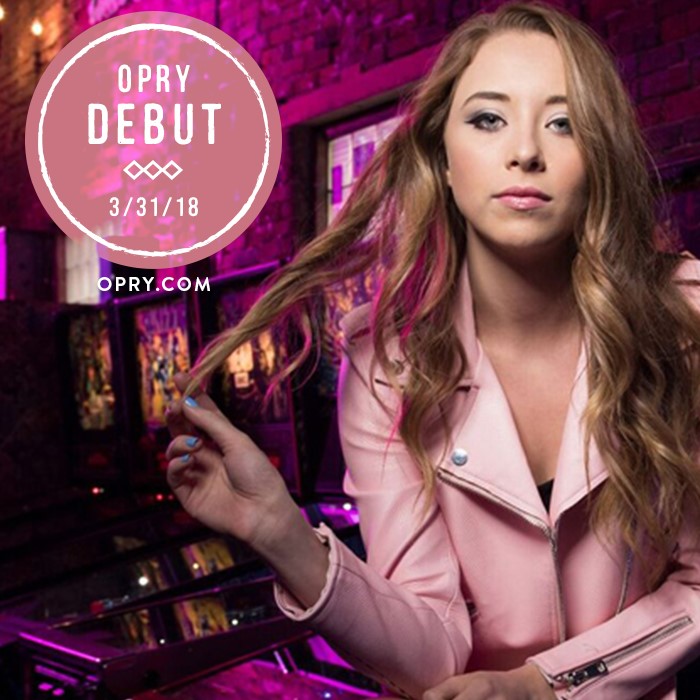 NASHVILLE, Tenn. (March 16, 2018) —  Country songstress Kalie Shorr will step into the hallowed circle at the Grand Ole Opry
for the very first time on Saturday, March 31. Her debut comes as a
crowning moment after years of hard work racking up numerous accolades
including being a Sirius XM “Highway Find,” joining the CMT Next Women
of Country Class of 2018, going on tour with RaeLynn and Sara Evans,
releasing her recent acclaimed EP Awake and more.

“The
Opry has been a goal of mine for the longest time so it’s such a
pinnacle moment for me,” Kalie said. “I played a show with Linda Davis a
few weeks ago and she gave me some advice and told me, ‘Don’t be afraid
to be quiet and soak it in. Really feel what’s happening and remember
it.’ I plan to do exactly that and I can’t wait to stand in the circle
and celebrate country music.”

Shorr
will join a cast of country legends the evening of her Opry debut
including Jeannie Seely, Ricky Skaggs, Lee Greenwood and Marty Stuart.
Tickets for Kalie’s debut can be purchased here.

CMT Next Women of Country Presents Sara Evans All The Love Tour Dates:

Kalie Shorr
burst onto the Nashville music scene in 2016 with her self-penned hit
“Fight Like A Girl”. The Portland, Maine singer-songwriter became a
Sirius XM Highway Find and was praised by Spotify, CMT, Radio Disney
Country, Taste of Country, and even Billboard magazine. In 2017, Kalie
released her Slingshot EP to rave reviews and was named “New Artist You
Need to Know” by Rolling Stone, “The New Nashville” by Teen Vogue, and
one of “2017’s Hottest Artists Under 25” by Taste of Country. Her newly
released single “Two Hands” has already been added to Sirius XM and
TuneIn with prominent placement on Apple Music’s Breaking Country and
Cool Country playlists, and Kalie is the only independent artist in
Power Rotation on Radio Disney Country. Her new EP, Awake, was
released January 26, 2018, and Kalie was recently inducted into CMT’s
Next Women of Country Class of 2018. She is currently the opening act on
the CMT Next Women of Country Presents Sara Evans All The Love Tour.
Playing over 100 shows a year, Kalie’s message of female- empowerment
has led to her being called the “next ‘Women of Country’ generation”
[CMChat] and a “modern country woman [who will] continue to inspire in
2018” [TasteofCountry.com].

You can find her music onApple Music, Spotify, andAmazon Music. As tour dates continue to be announced you can stay current with Kalie onInstagram,Twitter andFacebook. Be sure to follow her onYoutube and visitwww.kalieshorr.com.