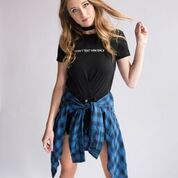 Answer:
I am country and always will be but I grew up listening to so many
different genres so I’m influenced by everyone from Michelle Branch and
the Dixie Chicks to the Foo Fighters and Paramore.

Answer:
I’ve always been a songwriter first- it’s my first love and always will
be. I wrote every song on Awake and I’m very proud of that!

Answer:
There’s some really heavy guitars on this project. This past summer
when I was writing and recording for it, I bought an electric guitar and
it opened me up creatively so much and you can definitely hear that.
Lyrically, I was more honest than I’ve ever been and it was so freeing.

Answer:
My team was so supportive of me pushing boundaries and exploring
creatively and I’m so lucky for my producer, Skip Black, who encouraged
me at every turn. I will never be a puppet and the people I surround
myself with know that.

Answer:
I would give women more of an equal opportunity. Country music has been
hard on females in the US with the 2017 Billboard charts having less
than 10% songs by a solo female by year end.

Answer:
My favorite part of my career is meeting the fans. No matter how tired I
am by the end of the show, I light up when I get to meet the people who
allow me to do this every day.

Answer:  I
am dying to play in Europe! My dad was born in Dusseldorf, Germany and
Larochelle, France and I would love to visit those two places and
hopefully play a show!

Answer:
I met a woman on the CMT Next Women of Country tour who had a matching
tattoo with her daughter that said “perfume sweet and whiskey strong” (a
line from my song Fight Like A Girl) and there’s no higher compliment
than that- cause it’s forever.

Answer:  That I will be there as soon as I can and that I love them!

Answer:
I eat so many gas station lunchables! It’s hard to find food,
especially late at night in the middle of nowhere. I also have done my
makeup in those gas stations too. It isn’t glamorous, but it’s so much
fun!