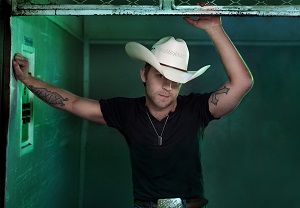 NASHVILLE,
Tenn. (July 9, 2015) – When it comes to hits, Justin Moore has cranked
out one Grand Slam after another in his multiple No.1 chart-toppers,
amounting to his over one million records sold. But this weekend, the
avid baseball fan will take a break from the Crushin’ It World Tour
with Brad Paisley to try his hand at a new kind of hit making, as he
participates in the 2015 MLB All-Star Legends & Celebrity Softball
Game on Sunday, July 12 at the Great American Ball Park in Cincinnati,
Ohio.

“I’m stoked to break out the spikes again,” Moore said. “Baseball is
my favorite sport, and one I’ve played my whole life. I may be a little
rusty, but it’s just like riding a bike. Should be fun to get back on
the diamond with all the other folks playing.”

In between innings, Moore will host CMT’s Hot 20 Countdown,
capturing one-on-one interviews and fun antics with some of the top
celebrity participants. The episode will premiere on Saturday, July 18
at 9/8 a.m. CT and re-air on July 19 at 9/8 a.m. CT.

Catch Justin out on the road in the following upcoming cities as part of Brad Paisley’s Crushin’ It World Tour:

Between tour dates, Justin is currently in the studio recording new music.