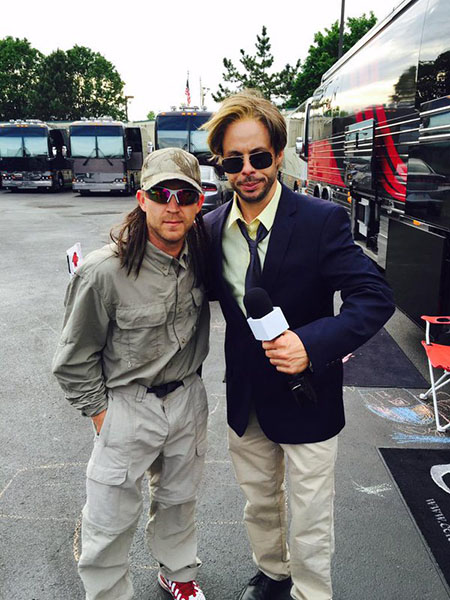 NASHVILLE, Tenn. (April 14, 2016)
– YouTube star and prankster Ed Bassmaster helps country music’s Justin
Moore go undercover to meet his biggest fan in the premiere episode of
“The Ed Bassmaster Show,” airing Thursday, April 14 at 10pm ET/PT on
CMT. It will re-air throughout the weekend. For a full list of airdates,
visit cmt.com. Click to view the trailer.

In the new show, comedian Ed Bassmaster debuts his unique and
hilarious characters including Skippy, Mumbles The Waiter and Bushman.
Jaws will drop when they see what Justin looks like disguised as someone
on his tour who is slightly less famous, all in an effort to surprise
one of his long-time fans with a personal meet and greet.

Full of laugh-out-loud moments, fans will get to see the funny side
of Justin, platinum-selling, No. 1 hit-maker known for his current
single “You Look Like I Need A Drink,” and former hits, “Small Town
U.S.A.,” “Backwoods,” “Point At You,” “’Til My Last Day,” “Bait A Hook,”
“I Could Kick Your A**,” and “If Heaven Wasn’t So Far Away.”

Justin’s latest “You Look Like I Need A Drink” is swiftly climbing up
the country charts, currently at the No. 25 position. If you haven’t
seen the Wild West-themed music video for the song, check it out on cmt.com/videos. “This may be my favorite video I’ve ever shot. I am a huge Western fan, and we shot one with a dose of comedy,” he said.

About Justin Moore
Arkansas native and 2014 ACM New Artist of the Year Justin Moore
recently released his newest single, “You Look Like I Need a Drink”
which is currently making its way up the Country radio charts. This
follows his second consecutive #1 album release with OFF THE BEATEN PATH.
The project produced Justin’s fourth and fifth GOLD-certified #1 hits,
“Point At You” and “Lettin’ The Night Roll.” Combined with two previous
GOLD–certified albums, he’s sold over 7 million digital downloads. The
Valory Music Co. recording artist has been featured on The Voice, Nashville, NFL Rewind, The Washington Post, People Country, USA Today, Fox & Friends
and more. He has earned multiple ACM, ACA and ACC Awards nominations.
In 2015, Justin was direct support on Brad Paisley’s CRUSHIN’ IT WORLD
TOUR. Justin will join Colt Ford on the road this summer for Brantley
Gilbert’s TAKE IT OUTSIDE TOUR.