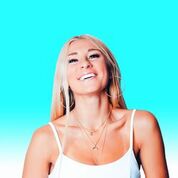 Music has many new fans throughout
Europe who may be hearing about you for the first time. How would you
describe yourself and the music you play to someone who has never seen
or heard you?

R&B
Country is the best way to describe my music. I love the lyrical style
of country music, but also fancy the melodies and soul of R&B music.
The tunes are meant to be empowering and uplifting, even when writing
about some of the darker or series subjects in life.

This
past year has been incredible. My first single, “Trust You” broke one
million streams and got picked up by CMT to be in rotation on national
television. I also signed with some incredible new team members who are
helping take everything to the next level. My songwriter series I
hosted, “Now You Know Music Row” spotlighting #1 hit writers helped me
raise $5000 to donate to the Boys and Girls Clubs of Middle TN in the
form of athletic and sporting equipment for all the clubs.

Be Where We Are is my next single following “Trust You”! I can’t wait to play it on this tour! https://ffm.to/bwwaeu

What is your favorite song among all the songs you have recorded and what’s the story behind it?

That’s
like asking a parent to pick their favorite child! I couldn’t do that.
However, luckily I have only released one single really so far prior to
last week so I can safely say that one is the one I’ve seen grow and
achieve the most!

Do you have any interesting stories about how fans have been affected by your music?

I’ve
been sent messages about my songs inspiring couples to save their
marriage before. That really hit my heart hard and helped me remember
the real reason musicians do what we do.

As an artist, you so many tasks such as recording, touring, interviews. What do you like best, what’s your favorite activity?

Songwriting
and performing are my two favorite. It’s incredible to create something
that will live forever out of nothing. It’s also enthralling to watch
something you created deeply connect and effect people live in the room
with you.

What was your big break that got you into the music business?

Music
began for me in a rather odd way! I started by singing National Anthems
for my own volleyball and basketball games. I started getting asked to
sing for the NFL, MLB, MLS, NASA, and many other pro teams. Once I sang
in front of 75k people with jets and fireworks overhead, I was hooked.

I’ll
be playing acoustic and showcasing all of my new music! We will keep it
high energy and hopefully all have a great time! I can’t wait to
see what the fans pick to be their favorites.

What message would you like to send your European fans?

The
goal is to come back to Europe! I want to really establish my music
over here so I have an excuse to keep coming back to see some of the
most beautiful, historic, awe inspiring places in the world. Hopefully
the fans all take the music home to their friends and families!