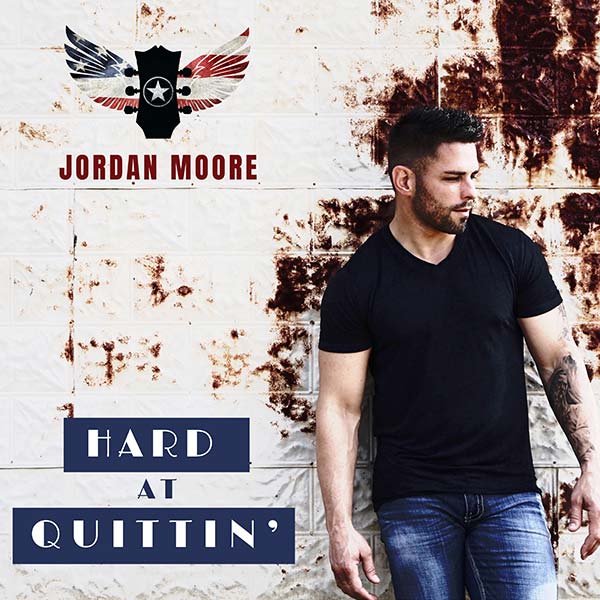 “Hard at Quittin” is the hot, up-tempo debut from Jordan Moore, an artist who just won’t quit!

“Small town kid,” “farm boy…” These are descriptions often used to establish the country roots of a country artist. In the case of Jordan Moore, those phrases didn’t have to be manufactured or manipulated to create a less-than-accurate image.  Jordan is the real deal. He was born and raised in Lowell, Michigan, known as “the farm town” to folks living in the area.

Music was always part of everyday life for Jordan and his four siblings, either in church or hearing guitar music, played by his father who had at one time aspired to a career in music himself. “I grew up in a very musical family, helping with praise and worship in church as long as I can remember,” says Jordan, who understands the sacrifice his father made, setting aside his own musical dreams to provide for his growing family.

Jordan’s interest in music led to him forming a rock band, Sargent Avenue, with his brother-in-law and some college friends. Following some local airplay on Michigan radio stations, the band scored a spot on MTV’s EXIT concert in front of an audience of 15,000 in Thailand, raising funds for an organization that fights human trafficking. Playing with the band was where Jordan found his voice, literally, as a vocalist, but in 2012 the band broke up.  By now Jordan was married and moved with his wife and growing family to Nashville. However, this was not initially for music.  Like his father before him, Jordan needed a ‘real’ job to provide for his family. With a degree in automotive business management, Jordan became a manager at a car dealership.

The long hours put a strain on his marriage leading to divorce and bouts of depression. Fortunately, the couple were able to reconcile and, once again, Jordan turned to music, contacting friend and former Sargent Avenue bandmate Noah Henson. Together, they began to write music again.

I just had no idea where to start,” says Jordan. “But then I started telling him what had happened with me and my wife and I came up with the title ‘Hard at Quittin,’ and its really true. Quitting is not in my DNA. It never has been.  I may fail but I will never, ever quit.”

Taking a new position at a car dealership in Franklin, Tennessee, Jordan was able to get a demo copy of “Hard at Quitting” into the hands of music industry heavy-hitters such as producer Michael Knox and singer-songwriter Tim Nichols.

“I constantly feel God in my life, directing me to make a return to music. And frankly, I’ve always listened to Him…and I’m not going to stop now.”

Newly inspired, Jordan is back on track with his debut single as a solo artist, “Hard at Quittin’,” produced by his longtime friend Noah Henson.  Quitting might not be in Jordan Moore’s DNA, but music certainly is and the proof is in this gutsy, uplifting, rocking country song. Don’t miss the opportunity to listen to “Hard at Quittin’.” You just might find it hard to quit listening!