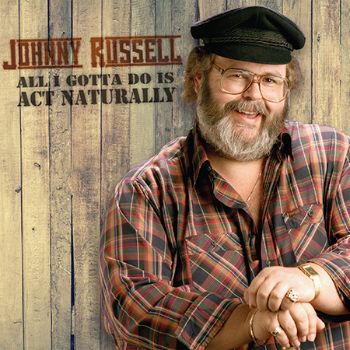 Johnny Russell, “All You Gotta Do Is Act Naturally,” Released by Country Rewind Records

Johnny Russell, “All You Gotta Do Is Act Naturally,”
was recently released by Country Rewind Records who’s well known
tradition of bringing unreleased traditional country music into the
contemporary country era has proven successful with previous projects.
The latest release is being distributed by Select-O-Hits and available
to order on Country Rewind Records website countryrewindrecords.com and on digital music platforms here.

“All You Gotta Do Is Act Naturally” consists of tracks that have not
been heard for decades and never commercially released. The tracks were
recorded in Nashville for broadcast use only and have been hidden from
the public. The original authentic sound is respected and supplemented
with updated instruments and background vocals, to bring the new
recordings into the contemporary country era. These recordings are a
follow up to Country Rewind Records previous releases of such greats as
Conway Twitty, Waylon Jennings, Connie Smith and more which received
great reviews by music critics everywhere.

The
new recording of  “Good Hearted Woman” has garnered a warm welcome by
independent radio and receiving generous airplay. Russell was a regular
performer on the Grand Old Opry for more then 20 years with hit
recordings by many acclaimed Country giants, as well as “Act Naturally”
which was recorded and released by The Beatles in 1965.

Country Rewind Records, Thomas Gramuglia, rescued the master tapes which
have been in storage for nearly 50 years. John Jungklaus handled the
original master tape transfers. Johnny Russell, “All You Gotta Do Is Act
Naturally,” was produced by Grammy Award Winner, J. R. McNeely who was
honored and thrilled to be part of this historical projects. These
long-forgotten recordings are now saved for prosperity.

Country Rewind Records has dedicated itself to bring classic country
with this contemporary feel to not only the past country fans but also
to the new country listeners.

Johnny Russell “All You Gotta Do Is Act Naturally” Song List:

Order Johnny Russell “All You Gotta Do Is Act Naturally” on Amazon Music, Apple Music / iTunes and Google Play

Select-O-Hits  is owned by Sam W. Phillips and John
Phillips, was co-founded in 1960 by their father, Tom Phillips, and
uncle, Sam Phillips, the legendary founder of Sun Records. Tom Phillips
began his career in music as Jerry Lee Lewis road manager for a number
of years. He had invested all of his savings into an upcoming 1958
European tour when news of Lewis marriage to his 13 year-old cousin hit
the front pages. Lewis career came to a sudden, although temporary,
halt. The tour was cancelled, and Tom was broke. Sam helped him by
giving him a job in the Sun Records warehouse and allowing Tom to live
with him while his family stayed behind in Mobile, Alabama. Eventually,
Tom saved enough money to send for his family in 1960. Tom was not
satisfied with running the warehouse, so with the help of his wife,
Lucille, he opened a small record store and one-stop that provided
small, predominantly black-owned record stores with everything from
phonograph needles to display racks. In the mid-1970s, Select-O-Hits
began to concentrate more on distributing and less on retail and
one-stops. The retail store closed in the mid-1980s, and the one-stop
followed a few years later. Select-O-Hits has formed a number of
successful record labels, such as Avenue, Icehouse, SOH, Brutal Records,
Basix Music, Blues Works and Prophet Entertainment. In 1997 half of the
company was sold to Malaco Records of Jackson, Mississippi. While all
genres of music are represented in the family of labels Select-O-Hits
distributes, Rap, Blues, Soul and Gospel are still the largest portion
of the business. Today with sales offices and staff in Memphis, Atlanta,
Nashville, Philadelphia, New York, Los Angeles, Sacramento, Miami,
Chicago, Houston and Seattle, Select-O-Hits is one of the largest
independent record distributors in the country, providing services for
over 300 independent vendors to all key US music traditional “brick and
mortar” retailers and digital media sites. For more information visit selectohits.com