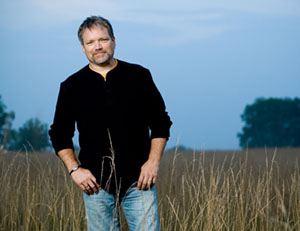 John Berry Will Headline Your Living Room!
Time Running Out for Kickstarter Rewards

NASHVILLE,
Tenn. (August 4, 2015) – Calling all fans of country music great John
Berry!! How would you like an autographed copy of John’s upcoming album?
Would you like to join him in the studio and see how the magic gets
made? Maybe you might like him to sing “Your Love Amazes Me” to your
spouse at an intimate anniversary party in your living room. You can
have all of these things, but you’d better act fast, because John’s
Kickstarter campaign is coming to a close and nearing the finish line.

The 40-day long Kickstarter began in July with a goal of raising
$50,000, money which will pay for the production of a two disc set. As
of Tuesday, Aug. 4, the project’s Kickstarter has generated $41,000 in
pledges and is within striking distance of its goal. And, with only four
days left to support the new album project, fans should not waste any
time. Otherwise, they run the risk of missing out on some really great
perks.

“I am so honored that my fans are rallying to support this project,”
said John. “We’re excited to get started, get into the studio, and to
lay down some great tracks for the new album. And it’s all being made
possible by the fans, which touches my heart.”

Among the dozens of rewards offered to Kickstarter pledges are:

The
untitled project will be a two-disc set. The first disc will feature 10
brand new country songs that he says are “absolute John Berry.” The
second disc in the set comprises five inspirational and Christmas songs.
This is the second Kickstarter-funded independent album Berry has
produced. His previous album, RealMan.RealLife.RealGod., was produced as a result of a successful Kickstarter campaign.

John’s musical journey began in 1979, not long after he picked up a
guitar. By the 1990s, he was a recording veteran. He has produced 6
Top-10 singles, including “Standing On the Edge Of Goodbye,” “She’s
Taken a Shine,” and the No. 1 hit, “Your Love Amazes Me.” The voice
behind two gold and one platinum albums, John continues to tour
nationally. His rendition of “O Holy Night” launched one of country’s
most popular and enduring traditions, John Berry’s Annual Christmas
Tour.