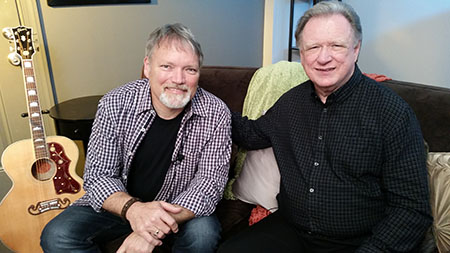 NASHVILLE,
Tenn. (October 2, 2015) – Country singer/songwriter John Berry is
taking fans inside his illustrious 36-year career in an upcoming episode
Heartland TV’s brand new smash “Reflections,” airing on Oct. 5 (check
local listings). Viewers will get a never-before-seen glimpse into the
past, present and future of John’s storied career, as he sits down with
Tennessee Radio Hall of Fame DJ Keith Bilbrey. In addition to Heartland
TV, the show will air on Blue Highways TV, The Family Channel, Angel Two
(DISH TV), and AMG-TV (check local listings).

“It was great to sit with Keith and reflect on some of the highlights
in my career,” said a humble John Berry. “I’m even more excited for the
next chapter, with a lot of surprises in store.”

Berry has been turning heads with his latest Tour Bus Cover series.
This time, he performs John Denver’s classic hit, “Annie’s Song.” The #1
Billboard Hot 100 smash, released in 1974, was given the John Berry treatment, and was spotlighted on Digital Rodeo. Stay tuned for even more Tour Bus Covers, as Berry tackles some of the biggest hits of all time.

The nominations have just been announced for the 21st Annual Inspirational Faith, Family & Country Awards™,
and Berry is a finalist for Mainstream Country Male Artist. The winners
will be revealed on Oct. 22 at Cornerstone Nashville. The Inspirational
Country Music Awards are held in conjunction with the annual ICM Faith,
Family & Country™ Week, which draws fans to Music City every year
and features the ICM Faith, Family and Country nightly showcases, a
special Sunday night Honkytonkin’ Jubilee, the Power Source #1 Party,
Media Appreciation Luncheon, membership breakfast, seminars and much
more.

About John Berry
During his star-making decade, John Berry placed 20 singles on the
county hit parade. He earned Gold and Platinum records. He was nominated
for a Grammy Award, CMA Awards and ACM Awards. Berry’s co-written “A
Mind of Her Own” and “Kiss Me in the Car” introduced him to radio
audiences in 1993. Then “Your Love Amazes Me,” “What’s in It for Me” and
“You and Only You” thrust him to stardom in 1994. “Standing on the Edge
of Goodbye,” “I Think About it All the Time,” and “If I Had Any Pride
Left at All” were all major hits the following year, and the first-named
earned John Berry a 1995 Grammy nomination. Berry took “Change My Mind”
into the country-music top-5 in 1996. “She’s Taken a Shine” became an
even bigger hit in 1997. Both fans and the media took note when “There
He Goes” was released as a 1999 “duet” with Patsy Cline.