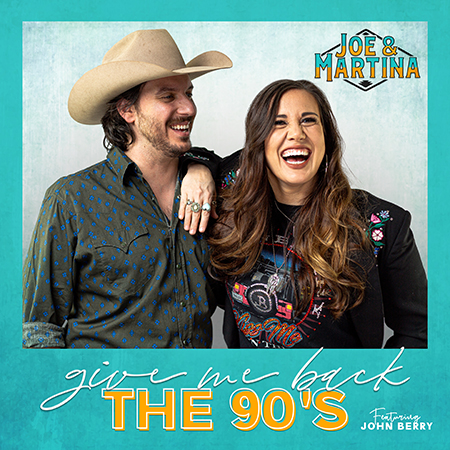 John Berry Shares His Iconic Voice on New Single by Joe & Martina, “Give Me Back The 90’s

Grammy winning singer/songwriter, John Berry, recently lent his iconic voice to the new single “Give Me Back the 90’s,” recorded and released by married duo Joe & Martina.
The lyrics reminisce about life before the digital age along with the
strategic name placement of 90’s Country artists including guest artist,
John Berry. The new single hits radio today and will be officially
released on all digital music platforms Feb. 22 and is available to
pre-save here.

“I
was honored to be asked to sing on a song with my friends, Joe &
Martina. I knew lyrically it was a song paying homage to the 90’s
country music they grew up on and I thought that was really awesome idea
for a song, but as I listened to the track up to the point they were
wanting me to sing I was absolutely taken back that they had included ME
as a 90’s artist that had influenced them to pursue their dreams in
country music!! It was quite humbling,” shared John Berry. “Thank you
Joe & Martina for the privilege of singing on your new single!!”

In an old honky tonk

With my baby and a John Berry song

Boot scootin’ all night, under the neon lights

If I could go back

In an old honky tonk

With my baby and a Wynonna song

Boot scootin’ all night, under the neon lights

“Martina
and I are hardcore Country music fans first and foremost,” said Joe.
“So intentionally nodding our hats to George Strait, Trisha Yearwood,
Wynonna and of course, John Berry, was nothing but an act of love for
some of the artists who truly shaped us as musicians and established our
life soundtrack.”

“This song represents us as Joe & Martina, how we grew up, what
influenced us and the way our hearts beat for Country music,” agreed
Martina. “I had a poster of John Berry on my wall as a kid, so having
John in our own home to record, sharing his talent and soul, was an
absolute honor and dream come true.”

Catch John Berry on the road as he continues to support the recent Thomas Road album and fan favorite hits.

John Berry’s current single, “The Richest Man,”
continues to make an emotional impact with fans and receive rave
reviews. It is no surprise that he quickly sells out venues all over the
country.  The Entertainment Nexus once described the award-winning
entertainer as “one of the most remarkable voices in music.”

The current album by John Berry, Thomas Road, is available on digital formats for streaming and download here and can be ordered from his website.

Hailing from California’s Central Valley, married duo Joe & Martina
have been performing together for the better part of a decade,
continuously honing their craft and developing into one of Country
music’s most recognized rising independent artists. The pair has called
Nashville home since 2015 and has since been included in Billboard’s
list of “Country Artists to Watch;” been exclusively featured on notable
outlets such as CMT, Country Rebel, and Sounds Like Nashville; opened
for Montgomery Gentry, Blake Shelton, Jake Owen, Jon Pardi, and numerous
others; acquired a cut on Luke Combs’ double platinum-selling album
This One’s For You with the song “Don’t Tempt Me;” and other milestones.
Introduced to producer/guitarist Johnny Garcia (Garth Brooks, Trisha
Yearwood) in 2016, Joe & Martina (then known as Terra Bella)
released their debut EP Road To Forever which scored them their first
Billboard/Music Row Top 100 chart position with “You’ve Got That
Somethin’.” As Terra Bella, Joe and Martina released their debut album
There’s A Country Song which quickly caught the ears of Nashville’s
music scene allowing them to perform on sought after stages at CMA Fest,
Whiskey Jam, Music City Light Stage at Bridgestone Arena, and more.
Self-described “farm kids” or “ag-vocates,” Joe & Martina also
frequently perform for FFA events as well as agricultural fundraisers
and rodeos.

GRAMMY Award-winning country star John Berry released
his current album Thomas Road released Nov. 30, 2018 named after Thomas
Road where he grew up in Decatur, GA. The first single off the project,
“The Richest Man” was released in March 2019. In 2018 he celebrated the
25th anniversary since signing his first record deal and has recently
charted at #30 on the Music Row Breakout Charts with the single,
“Beautifully Broken,” which is featured in the soundtrack for the
upcoming movie of the same name. Berry has placed 20 singles on the
country hit parade charts, six of which went Top 5 as well as a No. 1 on
the Billboard and Radio & Records country charts. He has earned
numerous Gold and Platinum records. Berry’s co-written “A Mind Of Her
Own” and “Kiss Me In The Car” introduced him to radio audiences in 1993.
Then, “Your Love Amazes Me,” “What’s In It For Me” and “You And Only
You” thrust him to stardom in 1994. “Standing On The Edge Of Goodbye,”
“I Think About It All The Time,” and “If I Had Any Pride Left At All”
were all major hits the following year. “Your Love Amazes Me” earned
Berry a 1995 GRAMMY nomination. In 1996, he scored a GRAMMY win for his
participation in Amazing Grace: A Country Salute to Gospel Vol. 1. Berry
took “Change My Mind” into the country music Top 5 in that same year.
“She’s Taken A Shine” became an even bigger hit in 1997. The same year,
he was nominated for CMA Vocal Event of the Year for “Long Haired
Country Boy” with Charlie Daniels and Hal Ketchum. Both fans and the
media took note when “There He Goes” was released as a 1999 duet with
Patsy Cline. Berry’s two most recent albums, What I Love The Most and
his holiday album, Christmas, are both available now on his website as
well as iTunes and other digital retailers.  Berry’s TV show, Songs
& Stories with John Berry, aired for two seasons on Heartland
Television, The Family Channel, The Country Network, Roku (via
Heartland), AMG TV, Country TV (New Zealand), and Keep It Country TV
(UK). For more information, visit songsandstories.com. Follow John on his website at www.johnberry.com.