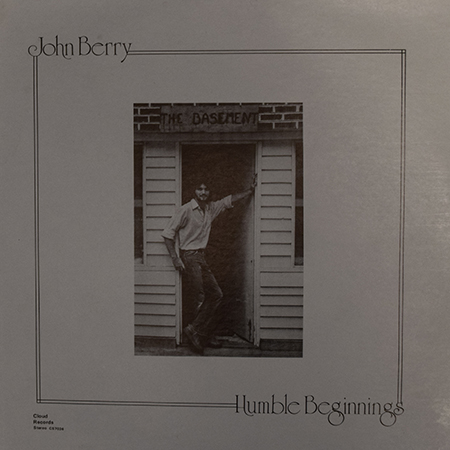 Grammy winning singer/songwriter, John Berry,
celebrated his 60th birthday performing in Panama City Beach and the
40th Anniversary of his first album, which he self-released on vinyl and
titled it Humble Beginnings in September 1979. He wrote all of the songs himself. The musicians that joined Berry on Humble Beginnings
were some of Berry’s dearest friends. His band consisted of Dick
Falcone on bass guitar, Mark Ensley on drums, and Perry Barton played
piano and background vocals. The album was recorded and re-mixed at The
Basement, Chamblee, Georgia with piano tracks recorded at Landmark
Christian Church, Doraville, Georgia. There is a picture of the little
studio on the back cover. Along with recording there, Perry and John
would load the gear into his van and set it up late at night at his old
church and use their wonderful grand piano. It was this first album that
started a tradition to always place a clock somewhere in the cover of
the album with the time set at the release number.  A limited number of
the collectors edition of the original vinyl is available at johnberrystore.bigcartel.com.

Berry’s early music was influenced by Cat Stevens, John Denver, Harry
Chapin, Kenny Loggins and Neil Young, no traditional country artists
were on his radar at that time, but his sweet-sounding tenor made the
most of his country-flavored pop material with all its well-rounded
edges.

“I started playing acoustic guitar in 1972 and I didn’t grow up
listening to country music,” Berry admits. “But my music lent itself to
that marketplace.”

The project is comprised of ten songs, written by John Berry, trying to
put to music his heart as a young man. “I can honestly say that I didn’t
have any idea what I was doing, but I did have my dear friend and
fellow musician, Perry Barton, right there beside me as we tried to
figure it all out. If nothing else
it was a great learning experience and I wouldn’t trade the time we
spent working on these projects at The Basement for anything. That
little studio, as primitive as it was, was a place that I really learned
who I was, and who I wasn’t.” reflects Berry. “It’s hard to believe it
was 40 years ago. Hopefully I’ve grown!”

His third album, Waiting For You, is also being made available.
These two vinyl albums are the only remaining original vinyl records
before he signed a record deal. By late 1981, Perry had joined a great
Atlanta band, The Joe Band. “They were so flippin’ good!!! I would go to
hear them play as often as I could. I was a bit of a nuisance I’m sure,
but I loved to hear those guys play,” exclaimed John Berry. The Joe
Band lent their talents to the making of Waiting For You.
Berry explained his reasoning, “Growth was certainly going to happen
when you have talented people with you. I was still trying to learn how
to write songs and how to sing without sounding like I was singing in a
choir!” The Joe Band, comprised of Jody Worrell, Ken McNeil, Jim Durand,
Perry Barton, and Michael C Steele became good friends of Berry and
eventually, Steele left that band and came to play in Athens, Ga with
Berry in the Spring of 1985 and has continued to play in John’s band
today. More information on this album is available at www.johnberry.com.

Berry added, “Not all history is pretty, but it’s mine. I own it. It’s
how I got here. I hope you’ll enjoy the journey back in time, if nothing
else it will help you appreciate (and be thankful for) the present even
more!”

During the
1980s and early 1990s, Berry worked the Atlanta club circuit and
released five more independent albums. His breakthrough came in 1993,
when his first album on a major label, Capitol, went platinum with sales
of more than 1 million copies. He followed that with a second Capitol
album, “Standing on the Edge,” which included the hit song “Your Love
Amazes Me.” “Your Love Amazes Me” went to No. 1 on the country music
charts, earning Berry a Grammy Award nomination and other honors.
Another cut from that CD, “Standing on the Edge of Goodbye,” was also
nominated for a Grammy.

Catch John Berry on tour as he wraps up his 2019 tour and prepares for
his 23rd Annual John Berry Songs and Stories Christmas Tour.

The current single, “The Richest Man,”
continues to make an emotional impact with fans and receive rave
reviews. It is no surprise that John Berry quickly sells out venues all
over the country.  The Entertainment Nexus once described the
award-winning entertainer as “one of the most remarkable voices in
music.”

The current album by John Berry, Thomas Road, is available on digital formats for streaming and download here and can be ordered from his website.

GRAMMY Award-winning country star John Berry released
his current album Thomas Road released Nov. 30, 2018 named after Thomas
Road where he grew up in Decatur, GA. The first single off the project,
“The Richest Man” was released in March 2019. In 2018 he celebrated the
25th anniversary since signing his first record deal and has recently
charted at #30 on the Music Row Breakout Charts with the single,
“Beautifully Broken,” which is featured in the soundtrack for the
upcoming movie of the same name. Berry has placed 20 singles on the
country hit parade charts, six of which went Top 5 as well as a No. 1 on
the Billboard and Radio & Records country charts. He has earned
numerous Gold and Platinum records. Berry’s co-written “A Mind Of Her
Own” and “Kiss Me In The Car” introduced him to radio audiences in 1993.
Then, “Your Love Amazes Me,” “What’s In It For Me” and “You And Only
You” thrust him to stardom in 1994. “Standing On The Edge Of Goodbye,”
“I Think About It All The Time,” and “If I Had Any Pride Left At All”
were all major hits the following year. “Your Love Amazes Me” earned
Berry a 1995 GRAMMY nomination. In 1996, he scored a GRAMMY win for his
participation in Amazing Grace: A Country Salute to Gospel Vol. 1. Berry
took “Change My Mind” into the country music Top 5 in that same year.
“She’s Taken A Shine” became an even bigger hit in 1997. The same year,
he was nominated for CMA Vocal Event of the Year for “Long Haired
Country Boy” with Charlie Daniels and Hal Ketchum. Both fans and the
media took note when “There He Goes” was released as a 1999 duet with
Patsy Cline. Berry’s two most recent albums, What I Love The Most and
his holiday album, Christmas, are both available now on his website as
well as iTunes and other digital retailers.  Berry’s TV show, Songs
& Stories with John Berry, aired for two seasons on Heartland
Television, The Family Channel, The Country Network, Roku (via
Heartland), AMG TV, Country TV (New Zealand), and Keep It Country TV
(UK). For more information, visit songsandstories.com. Follow John on his website at www.johnberry.com.