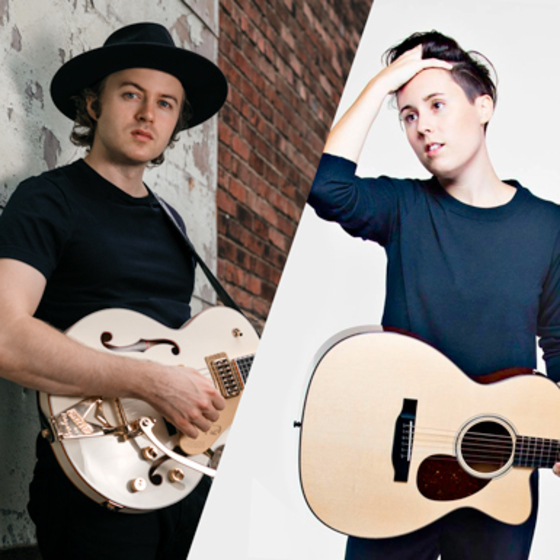 Robinson and Della Croce first crossed paths in 2009 at Guitar Town,
a hugely successful festival held each year in Copper Mountain, CO.
They have created a lasting friendship that has allowed them to
collaborate musically over the years as duet partners and co-writers.
This time they will share the bill as they unveil their latest album
projects, Robinson’s Undertones and Della Croce’s Illuminations.

Tickets are on sale now and available here.

ABOUT JOE ROBINSON:
Joe Robinson is considered uniquely gifted as a virtuoso guitarist and
singer/songwriter. His sound is entirely his own — a unique fusion of
vocally-based rock, blues, jazz, and R&B.  Born in the backwoods of
Temagog, on the mid-north coast of New South Wales, Australia, his
six-string ability and compositional insight have already earned him a
worldwide following. Robinson has spent many years touring North America
and abroad (China, Japan, Europe, and Australia) playing festivals and
headlining venues, which has enabled him to define himself as a budding
world visionary, displaying his virtuosity on electric as well as
acoustic guitar. This ultra-talented 27-year-old’s unique musical
sensibility, thoroughly modern guitar tones, and tenor voice are at the
core of the self-penned songs about communication and self-realization
found on new album Undertones. In addition to touring on his own, Robinson has been hitting the road with Rodney Crowell, Tommy Emmanuel, and Guitar Army, which features fellow master guitarists/singers/songwriters John Jorgenson and Lee Roy Parnell.

ABOUT SEAN DELLA CROCE: Sean Della Croce is a songwriter with a voice powerfully tuned to every story she tells. Her latest album, Illuminations,
is set for release this spring. A Nashville native, Della Croce grew up
steeped in the city’s culture and learned her craft by the light of
some of music’s biggest stars. She is the third generation of her family
with the music business in her blood, growing up around such
influential artists as Vince Gill, John Oates, Ralph Stanley, the Beach Boys and Leann Rimes.
Such familiarity enabled her to absorb a wide-range of song craft and
musical styles without being swept up by the larger-than-life
personalities.  Della Croce has forged a style all her own with her
latest project. Illuminations is a blend of folk wisdom with
Americana heart and a truly alternative soul. The record is rooted first
and foremost in Della Croce’s poetic lyrics—the ten track album is
comprised entirely of original songs. Her light-touch fingerstyle guitar
playing shows flashes of influence from her late step-father, the
well-known guitarist Pete Huttlinger.