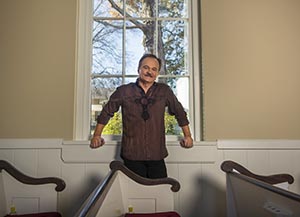 The 47th Annual GMA Dove Awards will take place in Nashville, Tenn.
at Lipscomb University’s Allen Arena on Oct. 11. The ceremony will be
taped and air on Oct. 16 on Trinity Broadcasting Network (TBN).

About Jimmy Fortune:
Jimmy Fortune toured, sang and performed with the legendary Statler
Brothers for 21 years. He joined them first as a temporary replacement
for Lew DeWitt, after DeWitt heard him singing at a ski resort and
recommended him. Following an audition in Nashville, Jimmy was contacted
by The Statler Brothers and performed his first show with them on
January 28, 1982, in Savannah, Georgia. Due to the debilitating effects
of Crohn’s Disease, Lew was unable to return to the stage with the
Statlers, and Jimmy was hired as a permanent replacement in August of
1982.

After The Statler Brothers retired on October 26, 2002, Jimmy seized
the opportunity to launch a solo career to share new music with his
fans. His first solo CD, When One Door Closes, was released August 2003 on Audium/Koch. He released a gospel album, I Believe, in June 2005, a Christmas CD, Feels Like Christmas,
in 2006, a live concert DVD in 2007 a country CD, “Windows” in 2009,
“Lessons” in 2012, and “Hits and Hymns” CD and DVD through Gaither Music
Group in 2015. The DVD debuted at #1 on Billboard. Jimmy is currently
living in Nashville, writing, and touring.