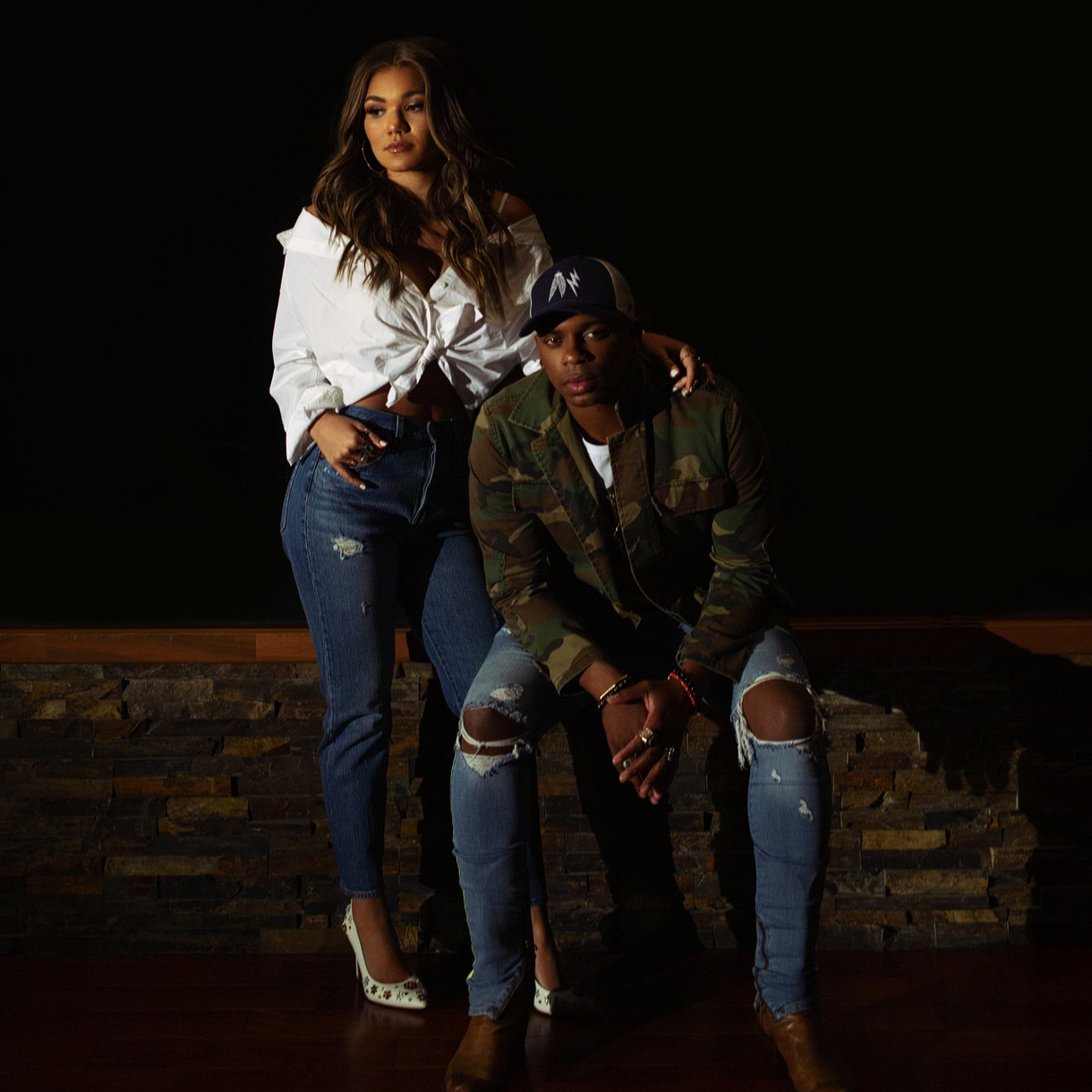 On
the heels of the release of his second single “Make Me Want To,” now in
its fourth week at Country radio, and a first-time nomination this week
for New Male Artist of the Year at the upcoming ACM Awards, country
music breakout Jimmie Allen and fellow country newcomer Abby Anderson
have released their own cover of the hit song “Shallow.”
The GRAMMY and Golden Globe-winning smash performed by Lady Gaga and
Bradley Cooper in the critically acclaimed and Oscar-nominated film “A
Star is Born” is up for “Best Original Song” at the 91st Academy Awards
ceremony airing this Sunday, February 24.

The accompanying video shows a split screen of Allen and Anderson going
about their daily lives before uniting in the studio to deliver the
passionately soulful chorus together in perfect harmony. Watch the video
here.

“‘A Star is Born’ was one of my favorites from last year, and the
performance of this song in the film really moved me as an artist,”
shares Allen. “I had chills! Getting to cover ‘Shallow’ with my good
friend Abby was such a cool experience. She’s an incredible vocalist,
and I’m excited for fans to hear our take on the song.”

“I think I speak for everyone when I say that I bawled like a baby
during ‘A Star Is Born.’ The song ‘Shallow’ immediately stood out to
me,” says Anderson. “When Jimmie called and asked if I would sing on
this song with him, I was honored. I mean I’m no Lady Gaga, but working
on this with Jimmie, who pours his whole heart into a song vocally, was
an absolute joy.”

Allen burst onto the country music scene with his breakout three-week No. 1 debut single, “Best Shot,” described by Rolling Stone
as a “rare honest love song, with a catchy, melodic chorus that flirts
with pop-rock power balladry,” and enabled the Delaware native to etch
his name in history as the first black artist to launch their career
with a No. 1 at Country radio.

The pop-infused follow up single, “Make Me Want To,” is the second from
Allen’s Stoney Creek Records / BBR Music Group debut album Mercury Lane, which The New York Times
asserts is one of 2018’s strongest and describes it as “a conventional
country album, filled with songs about the small details.” Allen is
currently supporting Kane Brown on his Live Forever Tour where
he continues to break new ground for African-American country artists.
He will also be hitting the road this summer as support on Chris Young’s
Raised on Country Tour and Rascal Flatts’ Summer Playlist Tour.

As announced earlier this week, Anderson is set to open for Rob Thomas as direct support on Thomas’s Chip Tooth Smile Tour.
The 44-date tour kicks off in Red Bank, NJ on May 28th and runs through
August 4th with stops in New York, Los Angeles, and Nashville.

Named one of The Bobby Bones Show’s “Class of 2019,” Anderson is also one of MusicRow’s “Next Big Thing for 2019,” and is included in Sounds Like Nashville’s “19 New Country Artists to Watch in 2019,” NYCountry Swag’s
“2019 Artists to Watch” and Country Music Tattle Tale’s “Artists to
Watch in 2019.” Armed with that support, Anderson is set to take the
stage at several music festivals this year including Stagecoach, Tortuga Music Festival, Country Thunder, and Off the Rails Country Music Fest. Making her first international appearance, Anderson is due to perform at C2C in London,UKon March 8th. Finishing up in the recording studio now, Anderson is set
to release new music on Black River Entertainment this spring.

Fans can stream Allen and Anderson’s version of “Shallow” here. For more information and tour dates, visit jimmieallenmusic.com and AbbyAndersonmusic.com.

The epitome of the phrase “persistence pays off,” Jimmie Allen laid it
all on the line to make his dreams a reality. Now signed to BBR Music
Group’s Stoney Creek Records, Allen’s debut single “Best Shot” is a
certified hit, claiming the top spot as the No. 1 Most Shazamed song in
the format for eight consecutive weeks, and the No. 1 spot on Country
radio for three weeks, marking the first time a black artist has
launched a career with a No. 1 hit with their debut single on country
radio. On the heels of that historic success, Allen is back with his
latest single, “Make Me Want To” which was most added at country radio
in its first week with 61 stations.

“Make Me Want To” is the second single off his Stoney Creek Records /
BBR Music Group debut album Mercury Lane released Oct. 12, 2018. Named
in tribute to the street he grew up on and the origin of his incredible
journey, Mercury Lane features a cutting-edge mix of country, rock,
R&B and pop that draws upon the influence of his family and
small-town upbringing of the critically-acclaimed rising star. Rolling
Stone raved Allen’s debut “challenges the narrowly defined model of what
constitutes a next big thing in country music in 2018” and The New York
Times dubbed it one of 2018’s strongest, calling it “a conventional
country album, filled with songs about the small details.”

The Southern Delaware native’s talent for songwriting is
undeniable, having written a song that was featured in a Super Bowl
commercial and appearing in a Diet Coke ad with megastar Taylor Swift.
“Blue Jean Baby,” off his debut self-titled EP, immediately caught the
attention of country music fans and critics alike with its soulful
groove— rocketing it to the top of digital playlists, across all
genres. Allen recently wrapped his run on Scotty McCreery’s Seasons
Change Tour and is currently on the road with Kane Brown on his Live
Forever Tour.  He will also be hitting the road this summer as support
on Chris Young’s Raised on Country Tour and Rascal Flatts’ Summer
Playlist Tour.  The hot newcomer was heralded as one of the top “artists
to watch in 2018” by Rolling Stone, Billboard, Pandora, Sounds Like
Nashville, NY Country Swag, Country Music Rocks and New England Country
Music and has earned spots in CMT’s “18 for 2018” Listen Up program and
Bobby Bones’ Class of 2018. For more information,
visit www.jimmieallenmusic.com.

Songwriter/artist Abby Anderson is slated to open as direct support for
Rob Thomas on Thomas’s 44 date Chip Tooth Smile Tour, kicking off on May
28th in Red Bank, NJ and running through August 4th with stops in New
York, Los Angeles, and Nashville.

Additionally, Anderson is confirmed to perform at multiple music
festivals this summer including Stagecoach, Off the Rails, Country
Thunder, and Tortuga. Marking her first international tour stop, the
Black River Entertainment artist will make her debut performance
at C2C in London this March. Named one of The Bobby Bones Show’s “Class
of 2019,” Anderson is also one of MusicRow’s “Next Big Thing for 2019,”
and is included in Sounds Like Nashville’s “19 New Country Artists to
Watch in 2019.” Since the release of her debut EP I’m Good,
Anderson has earned over 25 million streams, caught the attention of
fans nationwide and has had the privilege to open for some of the
Country’s brightest stars including Kelsea Ballerini, Bobby Bones, Billy
Currington, Devin Dawson, Russell Dickerson, Brett Eldredge, Walker
Hayes, Chase Rice, and more. Making her Grand Ole Opry debut in 2018,
Anderson received a rare standing ovation following the performance of
her first song, “Make Him Wait.” Watch the official music video for
Anderson’s “Make Him Wait” here. For more information and tour dates on
Abby Anderson, please visit AbbyAndersonmusic.com and follow her on Facebook, TwitterandInstagram.